Imagine it meeting an identical twin. Were they to merge they would produce a galaxy that's even greater. Cosmologists think that's how galaxies grow; through a complex process of continuous mergers. 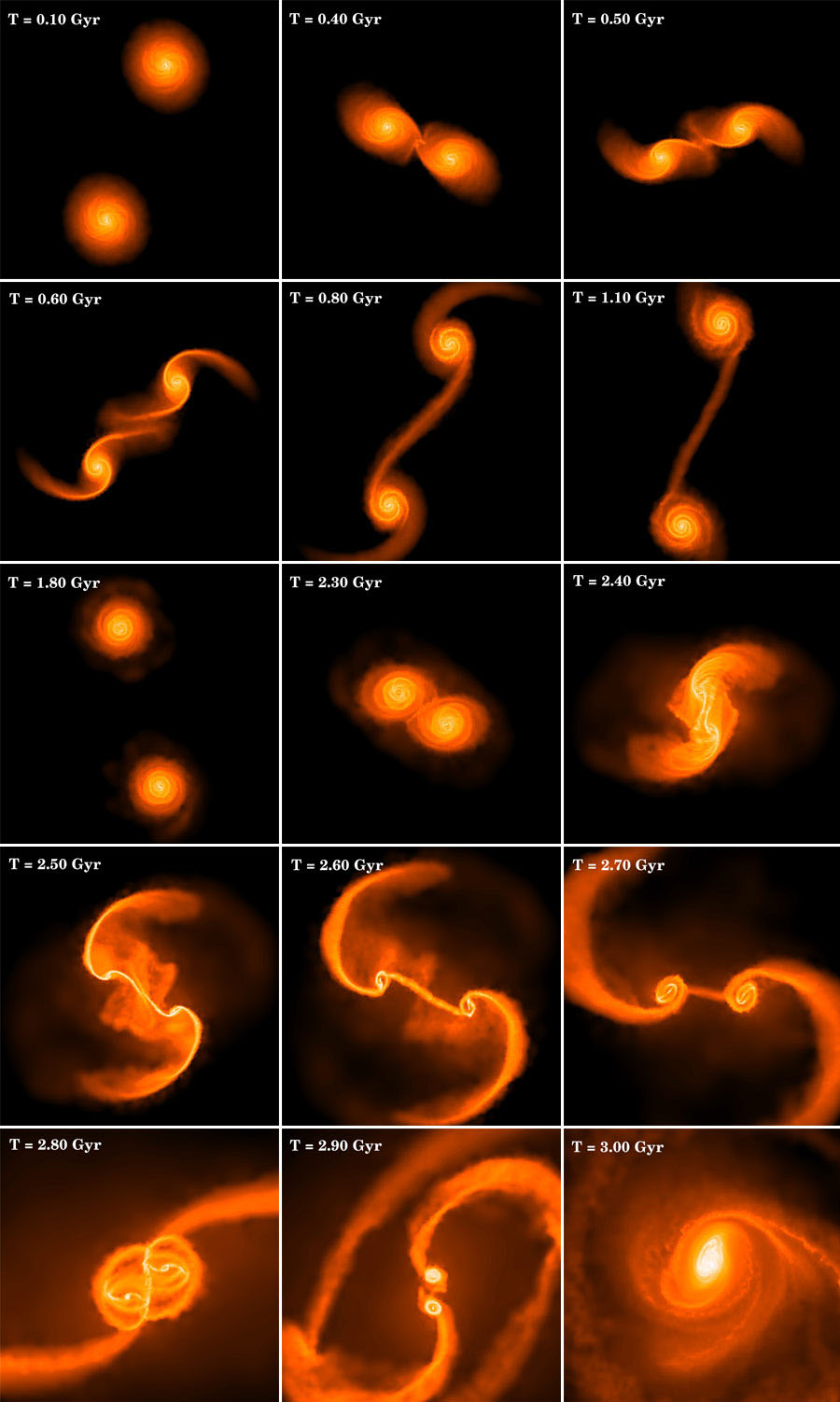 Using supercomputers to simulate galaxy mergers, scientists at Stanford and elsewhere have seen the formation of a new type of structure-a central disk of gas that can be from a hundred to a few thousand light years wide and from a few hundred million to a billion solar masses.

''The theory of General Relativity that Einstein developed about 90 years ago which describes the behavior of gravity has been verified in many of its predictions,'' says Stanford co-author Stelios Kazantzidis of the Kavli Institute for Particle Astrophysics and Cosmology. ''However, there is one major consequence of this theory that has yet escaped verification, and this is the existence of gravitational waves. Due to the fact that coalescing SMBH binaries constitute the most powerful sources of gravitational-wave emission in the universe, it is of primary importance to establish the necessary conditions leading to the merger of two SMBHs.''

A SMBH binary consists of two SMBHs orbiting around their center of mass. The black holes may or may not merge depending on the existence of a mechanism that can extract angular momentum from their orbit and reduce their relative separation, Kazantzidis said.

''A pair of SMBHs may interact with the stars around them or with the gas,'' he said. ''Both the gas and the stars exert a frictional force onto the black holes. This frictional force extracts energy from the orbital motion of the SMBHs. As a result, the separation between them gradually shrinks.'' It is unclear whether it is the friction of the stars or that of the gas that dominates the process.

To model a galaxy merger, scientists first use a computer program that builds galaxies based on observations and theoretical predictions. For example, all galaxies are surrounded by extended, massive dark matter halos, and spiral galaxies contain a disk of stars. In all self-consistent models of disk galaxies these two components must be included.

''Once the galaxy models are constructed, we must parameterize the orbits of involved galaxies and set them on a collision course,'' Kazantzidis said.

The scientists found that when the merging galaxies contain some gas, their SMBHs will form a binary system in most cases. Once paired, the black holes may keep reducing their separation until they are about as far apart as our solar system's width, Kazantzidis said.

''At this point we predict that they should begin producing strong gravitational waves,'' he said. ''Since the emission of waves extract energy from the binary black hole, the two holes will ultimately merge, less than a billion years after they had initially formed a binary.''

This paper reports the first time that a galactic merger is followed through the formation of a gravitationally bound SMBH binary and down to scales of only a few light years.

While many earlier authors have investigated the formation of SMBH binaries using supercomputer simulations of galaxy collisions, Kazantzidis and his colleagues followed the processes over a wide range of spatial and temporal scales.

''With very few exceptions, earlier studies did not explore the role of gas in driving the evolution of a SMBH pair,'' Kazantzidis added. ''Theoretical and observational evidence do suggest that the central regions of merger remnants contain significant amounts of gas. Our simulations provide new insights into how SMBHs form pairs and coalesce, and underscores the vital role of the gaseous component of galaxies in determining the fate of SMBHs.''

Average galaxies such as the Milky Way do not contain such impressive gaseous nuclear disks, suggesting that mergers are important in forming these structures, Kazantzidis said. ''Our simulations were the first to report the formation of such nuclear disks in galaxy mergers. It is natural to assume that the large reservoir of gas present in these nuclear disks represents the fuel that feeds the central supermassive black holes and powers the active galactic nucleus.''

The results are good news for LISA, or the Laser Interferometer Space Antenna experiment, a space-based observatory designed to detect gravitational waves using laser interferometry over astronomical distances. The LISA detector is ideal for probing merging supermassive black holes such as those simulated by Kazantzidis and colleagues. A joint venture of NASA and the European Space Agency, LISA is expected to begin observations around 2015.

''Detecting the gravitational waves from the merging supermassive black holes will not only be the strongest confirmation of one of the most fundamental theories of physics (General Relativity) but also a confirmation of our general scenario for galaxy formation and evolution,'' Kazantzidis says. ''This is one of the most beautiful examples of the deep connections between fundamental physics and astrophysics.

Simulations were performed on supercomputers at the Pittsburgh Supercomputing Center, the University of Zurich and ETH Zurich. ''The numbers of calculations needing to be computed is astronomical,'' Kazantzidis said. ''This is why we resort to powerful supercomputers capable of performing very large number of calculations per second. Supercomputer simulations allow us to effectively compress the vast cosmological timescales that apply to the largest structures in our universe down to weeks of virtual time. This gives us a completely new view of the universe from what is available to us by observation alone.''

What's more, the supercomputers provide the closest thing to a physics lab that is available to the astrophysicist. ''The numerical simulations we conducted constitute the most extensive calculations ever performed on this topic, consuming several months of supercomputing time each at various supercomputer centers around the world,'' he said.

While the merger that the scientists simulated-one where both galaxies have equal mass-is less probable than a merger of unequal galaxies, it's not at all improbable, Kazantzidis said. In fact, it's the fate of our own Milky Way.

''Our galaxy is in a collision course with its largest neighbor, Andromeda, due to take place in approximately three billion years time,'' Kazantzidis said. ''The result of this collision will be the destruction of the disks and the formation of an elliptical galaxy.''