New evidence on sex differences in people’s brains and behaviors emerges with the publication of results from the British Broadcasting Corporation’s (BBC) Sex ID Internet Survey. Survey questions and tests focused on participants’ sex-linked cognitive abilities, personality traits, interests, sexual attitudes and behavior, as well as physical traits. The Archives of Sexual Behavior¹ has devoted a special section in its April 2007 issue to research papers based on the BBC data. 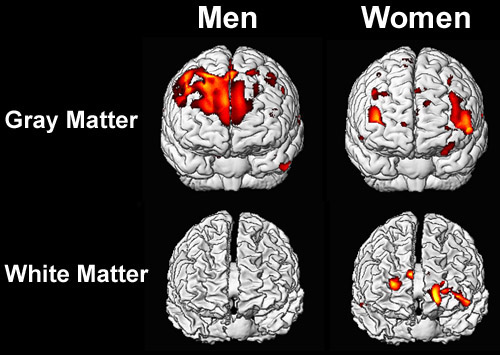 Frontal views of the brains of men and women. Credit: UCI

BBC Science, in collaboration with researchers in the United Kingdom and North America, designed their research project on psychological sex differences in conjunction with their TV documentary, Secrets of the Sexes. The project culminated in the creation of the BBC Internet Survey, which was posted on the BBC Science and Nature website.

In just three months (February-May 2005), over 250,000 people from all over the world responded to the full survey. Some initial results were presented in July 2005 in the program, Secrets of the Sexes. The complete dataset has been analyzed since, with key findings published in the current issue of the Archives of Sexual Behavior.

Included in the April issue of the Archives of Sexual Behavior is a paper on methodology, describing the study’s history, rationale, ethics and methodological considerations, namely the advantages and limitations of internet-based research. Stian Reimers, from the Department of Psychology at University College London in the UK, says in this paper, “Much is made of the different agendas of science and the media, and the tensions that can occur when the two interact. Although this tension is not likely to disappear in the near future, it is hoped that this project can serve as an example of how positive interaction between the two professions can have beneficial consequences for both.”

The remaining papers address a range of topics in the study of sex differences and sexuality, including: