Just a little mechanical strain can cause a large drop in the maximum current carried by high-temperature superconductors, according to novel measurements carried out by the National Institute of Standards and Technology (NIST). The effect, which is reversible, adds a new dimension to designing superconducting systems—particularly for electric power applications—and it also provides a new tool that will help scientists probe the fundamental mechanism behind why these materials carry current with no resistance. 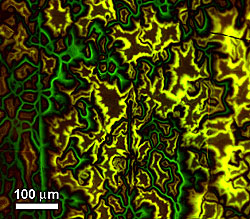 Magneto-optical image of magnetic fields within a YBCO superconductor showing electrically connected grains (yellow) and grain boundaries (green) that form barriers to superconducting currents. The large reversible effect of strain observed by NIST might be due to associated changes in grain boundaries, which raise the barriers to current flow and lowering the material's current-carrying capability. Credit: D.C. van der Laan/NIST

The measurements, reported in Applied Physics Letters,* revealed a 40 percent reduction in critical current, the point at which superconductivity breaks down, at just 1 percent compressive strain. This effect can be readily accommodated in the engineering design of practical applications, NIST project leader Jack Ekin says, but knowing about it ahead of time will be important to the success of many large-scale devices. The effect was measured in three types of yttrium-barium-copper-oxide (YBCO), a brittle ceramic considered the best prospect for making low-cost, high-current, superconducting wires. The researchers developed a “four point” bend technique that enables studies of superconducting properties over a wide range of uniform strain at high current levels. The superconductor is soldered on top of a flexible metal beam, which is then bent up or down at both ends while the critical current is measured.

The discovery is the first major reversible strain effect found in practical high-temperature superconductors, which generally have been tested under smaller tensile strains only, or at strains so high they caused the material to break down permanently. The newly discovered effect is totally reversible and symmetric for both compressive and tensile (pushing and pulling) strains, suggesting it is intrinsic to the fundamental mechanism of superconductivity in YBCO.

The NIST team is now pursuing the possibility of using the effect as a new tool for probing the elusive mechanism underlying high-temperature superconductivity. The next step is to investigate how magnetic fields affect the strain effect, and several collaborations are under way with universities and other research organizations to study the interplay of the effect with other factors affecting high-temperature superconductivity. The research described in the new paper was supported in part by the U.S. Department of Energy.