It may not sound like a great thing for your backyard festivities but scientists have figured out how to make the fruit fly live longer. Luckily, humans will get something out of the deal -namely the discovery that a single protein can inhibit aging means we might live longer to be annoyed by insects. 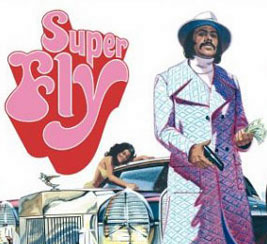 Not this Superfly. A super fruit fly. © Warner Bros.

“This work is important for two reasons,” said study author Richard Roberts, associate professor of chemistry, chemical engineering and biology at the University of Southern California.

“First, it demonstrates that a single inhibitor can dramatically alter lifespan, a very complex trait. It is remarkable that you can alter it with a single genetic change.

“We don’t really need to make fruit flies live longer, but if we understand how to do this, our approach may have direct application to higher organisms, such as ourselves.”

Secondly, Roberts said, the method used by his research group to make the inhibiting proteins “opens the possibility of developing a lot of new therapeutics.”

The study describes a new method for blocking receptors involved in aging and disease across many species, including humans.

Receptors are proteins that transmit signals across a cell membrane. In the fruit fly, Roberts and his team manufactured short proteins that blocked a receptor involved in fruit fly aging, as previously demonstrated by co-author Seymour Benzer of Caltech.

Flies with a blocked receptor saw their lives extended by a third, with no apparent side effects.

The same blocking strategy should work in all such receptors, known as class B GPCRs (for G protein-coupled receptors). Many GPCRs figure prominently in disease as well as in normal development, Roberts said.

“It is the most targeted family of receptors” by drug manufacturers, Roberts said, estimating that a quarter of all pharmaceuticals focus on GPCRs.

“This approach should be generally applicable.”

Though there were no guarantees that inhibiting one part of the receptor would incapacitate the whole, the strategy succeeded.

Roberts’ method builds on his co-discovery, in 1997, of a simple method for building libraries of trillions of short proteins, or peptides.

Unlike DNA, which can be copied and multiplied millions of times with polymerase chain reaction (PCR), proteins cannot be copied directly.

But Roberts and Jack Szostak of Massachusetts General Hospital thought of fusing peptides to the bits of messenger RNA that contained their sequence.

“Essentially, we developed a way to do PCR on proteins,” Roberts said.

The use of RNA-peptide fusions allowed the easy creation and multiplication of randomly generated peptides. Roberts termed this approach “Irrational Design.”

In the new study, Roberts and his group literally threw trillions of peptides at the receptor and saved the ones that stuck.

“We let the molecules themselves decide if they bind, rather than trying to design them rationally,” he said.

After multiple cycles, the researchers had a group of peptides that stuck to the receptor and not to any other protein.

Fruit flies genetically altered to produce such peptides lived longer, suggesting that the peptides were interfering with the receptor’s normal function.

Why these particular peptides work, and why the receptor they target plays such an important role in fruit fly aging, remain the bigger and as yet unanswered questions.