Picture a cool place, teeming with a multitude of hot bodies twirling about in rapidly changing formations of singles and couples, partners and groups, constantly dissolving and reforming.

That's a good description of the shells around dying stars, the place where newly formed elements make compounds and life takes off, said Katharina Lodders, Ph.D., research associate professor of earth and planetary sciences in Arts & Sciences at Washington University in St. Louis.

“The circumstellar environment is where chemistry happens for the very first time,” said Lodders. “It's the first place a newly synthesized element can do chemistry. It's a supermarket of things from dust to gas and dust grains to molecules and atoms. The circumstellar shells enable a chemistry that produced grains older than our sun itself. It's generated some popular interest, and this year marks the 20th anniversary of the presolar grain discoveries.” 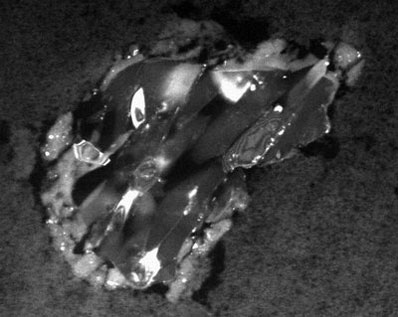 This two-micrometer comet particle, collected by the Stardust spacecraft, is made up of the silicate mineral forsterite, which can found on Earth in gemstones called peridot. Credit: NASA/JPL

After the discovery of presolar diamonds in a meteorite in 1987 - the first stardust found in a meteorite - researchers at Washington University in St. Louis have been prominent in finding and analyzing pre-solar grains made of silicon carbide, diamonds, corundum, spinel, and silicates.

The latest discovery - a silicate grain that formed around a foreign star and became incorporated into a comet in our solar system - was captured and returned by the STARDUST space mission in 2006. Lodders said that nucleosynthesis - the creation of atoms - takes place in a star's interior, made of a plasma far too hot for any molecular chemistry to take place. The event that enables chemistry is the death of a star, when elements are spewed out of the core, creating a shell around the star. As this circumstellar shell cools, the elements react to form gas molecules and solid compounds.

Our sun and other dwarf stars of less than about ten solar masses burn hydrogen into helium in their cores. As they come of age, they become Red Giant stars and burn the helium to carbon and oxygen. But many heavy elements such as strontium and barium, even heavier than iron, are also produced, albeit in much smaller quantities than carbon.

Heavyweight stars go out more spectacularly, in violent supernovae such as SN2006gy, first observed late last year, which has turned out to be the most massive supernova ever witnessed. But no matter what, all stars like the sun and heavier ones like SN2006gy empty their elements into their circumstellar environments, where gaseous compounds and grains can form. From there, the gas and grains enter the interstellar medium and provide the material for new stars and solar systems to be born.

Lodders presented a paper on circumstellar chemistry and presolar grains at the 233rd American Chemical Society National Meeting, held March 25-29 in Chicago, where a special symposium was held to track the evolution of the elements across space and time. A book of proceedings is being prepared for publication. Lodders said that just one percent of all known presolar grains come from supernovas. She said that several million stars have been catalogued and several thousand individual presolar grains have now been analyzed.

“Back in the 1960s, astronomers didn't know that presolar grains existed in meteorites,” Lodders said. “They were discovered when researchers were looking at meteorite samples and studying noble gases. They asked what is the mineral carrier of the noble gases.” By separating minerals from samples of meteorites, they eventually found the carriers of the noble gases - presolar diamonds, graphite and silicon carbide -, and thus started the study of presolar grains 20 years ago.

“Laboratory astronomy of stardust has revealed much about stellar element and isotope production, and about gas and dust formation conditions in giant stars and supernovae.”