On the night of 21 July, ESO astronomer Yuri Beletsky took images of the night sky above Paranal, the 2600m high mountain in the Chilean Atacama Desert home to ESO's Very Large Telescope. The amazing images bear witness to the unique quality of the sky, revealing not only the Milky Way in all its splendour but also the planet Jupiter and the laser beam used at Yepun, one of the 8.2-m telescopes that make up this extraordinary facility.

"The images are not composite", emphasises Yuri Beletsky. "The camera was being tracked on the stars, which can be easily noticed if you look at the telescope domes on the image (they look a little fuzzy). The colour of the laser beam on the first image actually looks pretty close to what one can see on the sky with the unaided eye."

Most striking in the images is the wide band of stars called the Milky Way. Spanning more than 100 degrees in the first of these images, it shows the dust and stars that are part of our own Galaxy, a spiral galaxy containing about 100 billion stars. 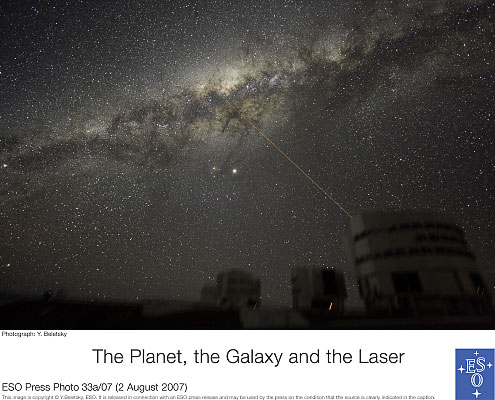 In the middle of this image, two bright objects are also seen. The brighter of the two is the planet Jupiter. The other is the bright star Antares. Another bright star, Alpha Centauri, one of the closest stellar neighbours to the Sun, is visible at the middle-left edge of the image.

Three of the four domes that shelter the 8.2-m VLT's Unit Telescopes are visible on the first image. Streaming out of Yepun, Unit Telescope number 4, is the laser beam used to create an artificial star above Paranal, aiming directly at the centre of our own Galaxy.

At the time the pictures were taken, astronomers were indeed using the SINFONI instrument (see ESO 21/04) to study the Galactic Centre, having a close look at the supermassive black hole that lurks in there.

With so many stars visible from the exceptional site of Paranal, one may wonder why it is necessary to create another, artificial, star? The answer lies in the very sophisticated instruments that are used on ESO's VLT. Some of them, such as NACO and SINFONI, make use of adaptive optics, a technique that allows astronomers to overcome the blurring effect of the atmosphere. This means that astronomers obtain images almost as good as if the whole telescope was placed in space, above Earth's atmosphere. 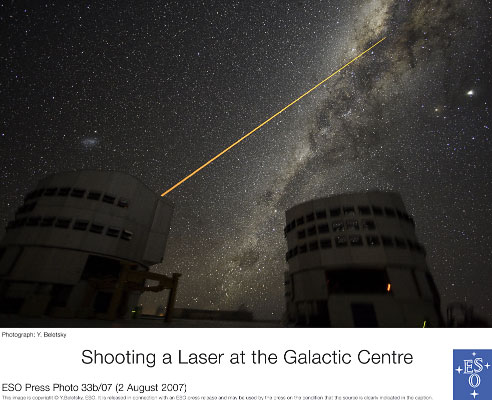 Adaptive optics, however, requires a nearby reference star that has to be relatively bright, thereby limiting the area of the sky that can be surveyed. To surmount this limitation, astronomers now use at Paranal a powerful laser that creates an artificial star, where and when they need it (see ESO 07/06 and 27/07).

Launching such a powerful laser from a telescope is state-of-the-art technology, whose set-up and operation is a continuous challenge. As seen from the images, this is, however, a technology that is now well mastered on Paranal.