Logic or feeling. Left-brained or right-brained. The terms have become part of the lexicon for categorizing intellectual and artistic people. It turns out there may be more than just wishful thinking in labelling people. New research has furthered our understanding of the different roles of the left and right sides of our brains.

A study led by the University of Exeter has highlighted differences in the ability of people to perform basic tasks, depending on whether the left or right sides of their brains have been damaged by a stroke. The research identified the role of the right side of the brain in noticing and correcting errors. 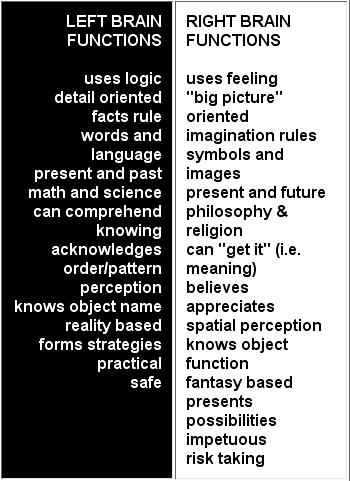 Dr Tim Hodgson, neuro-psychologist at the University of Exeter and lead researcher on this study, said: ‘We know that suffering a stroke in the left frontal region can affect aspects of speech and language, but this research highlights, for the first time, the additional challenges that people with right frontal-lobe damage might face in everyday life.’

23 people, each with frontal lobe damage, performed a ‘rule-switching’ task which involved learning rules linking the colour of a symbol on a computer screen with a movement to the left or right. All the participants made mistakes during the task, but it was those with right-brain damage who most frequently failed to spot their errors and had difficulty keep track of the changing task rules. The group with damage to the left frontal lobes corrected 68% of mistakes in the test, whereas people with right-brain damage only made corrections to 30% of their errors. This suggests that people who suffer damage to their right frontal lobe following a stroke may struggle in everyday situations which require attention to be switched flexibly from one thing to another.

‘This study highlighted the role that the right-hand side of the brain has in keeping track of our own actions and helping us to notice when we have made mistakes,’ Dr Hodgson added. ‘This type of “self-monitoring” function may play a crucial role in many day to day situations. For example, when preparing a meal we often have to keep track of several tasks at once and make sure we perform each one correctly and at the right time.’