Scientists have identified the receptor in cells of the peripheral nervous system that is most responsible for the body's ability to sense cold.

The findings reveal one of the key mechanisms by which the body detects temperature sensation. But in so doing it also illuminates a mechanism that mediates how the body experiences intense stimuli – temperature, in this case – that can cause pain. 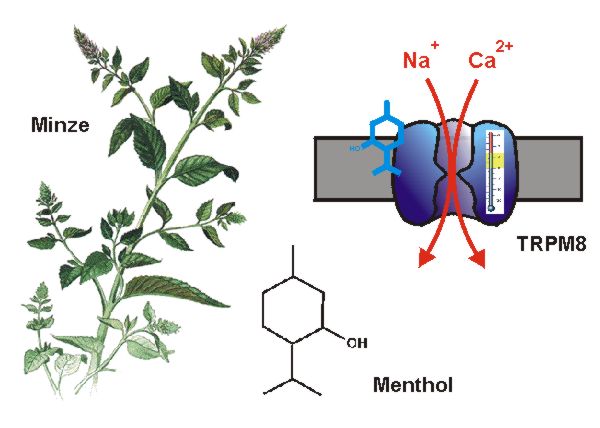 As such, the receptor – known as menthol receptor TRPM8 -- provides a target for studying acute and chronic pain, as can result from inflammatory or nerve injury, the researchers say, and a potential new target for treating pain.

"By understanding how sensory receptors work, how thresholds for temperature are determined, we gain insight into how these thresholds change in the setting of injury, such as inflammatory and nerve injury, and how these changes may contribute to chronic pain," says senior author David Julius, PhD, chairman and professor of physiology at UCSF.

The methanol receptor, and other temperature receptors discovered in recent years by the Julius lab, offer potential targets for developing analgesic drugs that act in the peripheral, nervous system, rather than centrally, where opiate receptors act, he says.

The finding is a milestone in an investigation the team began several years ago. In 2002, the researchers discovered that the receptor was activated by chemical cooling agents such as menthol, a natural product of mint, and cool air. They reported their discovery, or "cloning," of the receptor in "Nature" (March 7, 2002), hypothesizing that the receptor would play a key role in sensing cold. However, some subsequent papers questioned this theory.

In the current study, the team confirmed their hypothesis by "knocking out" the gene that synthesizes the receptor, both in sensory neurons in cell culture and in mice. The cells in culture were unresponsive to cooling agents, including menthol. The genetically engineered mice did not discriminate between warm and cold surfaces until the temperature dropped to extremes.

"It's been known for years that menthol and related cooling agents evoke the psychophysical sensation of cold – somehow by interacting with the aspect of the sensory nervous system that's related to cold detection," says Julius.

The current study, he says -- led by Diana M. Bautista, PhD, and Jan Siemens, PhD, of the Julius lab and Joshua M. Glazer, PhD, of the lab of co-senior author Cheryl Stucky, PhD, of the Medical College of Wisconsin – puts that question to rest.

As the mice lacking the gene were not completely insensitive to cold -- they avoided contact with surfaces below 10 degrees C, though with reduced efficiency -- the next step, says Julius, will be to illuminate this residual aspect of cold sensation.

The finding is the latest of a series of discoveries led by the Julius lab on the molecular mechanisms of temperature sensation and pain. In 1997, the lab cloned the gene for the capsaicin receptor, the main pungent ingredient in some chili peppers (Nature, Oct. 23, 1997), and in 2000 reported that, in mice, the receptor triggers the nerves to fire pain signals when they are exposed to high ambient heat or the fiery properties of peppery food. (Science, April 14, 2000). The study demonstrated that capsaicin and noxious heat elicit the sensation of burning pain through activation of the same receptor on sensory neurons.

Most recently, they identified the receptor of isothiocyanate compounds, which constitute the pungent ingredients in such plants as wasabi and yellow mustard. In response to high temperatures, the receptor produces pain and irritation.

"All of these studies use natural products to understand pain mechanisms in the periphery of the body, where they are first sensed," says Julius.

The Julius team's complementary work is focused at the level of the sensory nerve fiber, where the signals are first initiated. "We want to know," Julius says, "how do you detect these stimuli to begin with" How do your sensory nerve endings do this to begin with" And what are the biochemical and biophysical mechanisms that account for this""

All three receptors the Julius lab has discovered are members of the TRP family of ion channels expressed on sensory neurons. The latest finding adds to the evidence, says Julius, that TRP channels are the principal transducers of thermal stimuli in the mammalian periphery nervous system.

Other co-authors of the study were Pamela R. Tsuruda, PhD, of UCSF, and Sven-Eric Jordt, PhD, of Yale University School of Medicine.

The study was funded by the National Institutes of Health, the Burroughs Welcome Fund and the Human Frontiers Science Program Organization.