It appears that chemical warfare has been around a lot longer than poison arrows, mustard gas or nerve weapons – about 100 million years, give or take a little.

A new study by researchers at Oregon State University has identified a soldier beetle, preserved almost perfectly in amber, which was in the process of using chemical repellants to fight off an attacker when an oozing flow of sap preserved the struggle for eternity.

The discovery is the earliest fossil record of a chemical defense response, scientists say, and indicates that this type of protective mechanism – now common in the insect world and among other animal species – has been around for more than 100 million years. It’s a sophisticated form of defense that clearly was in good working order while dinosaurs still roamed the Earth. 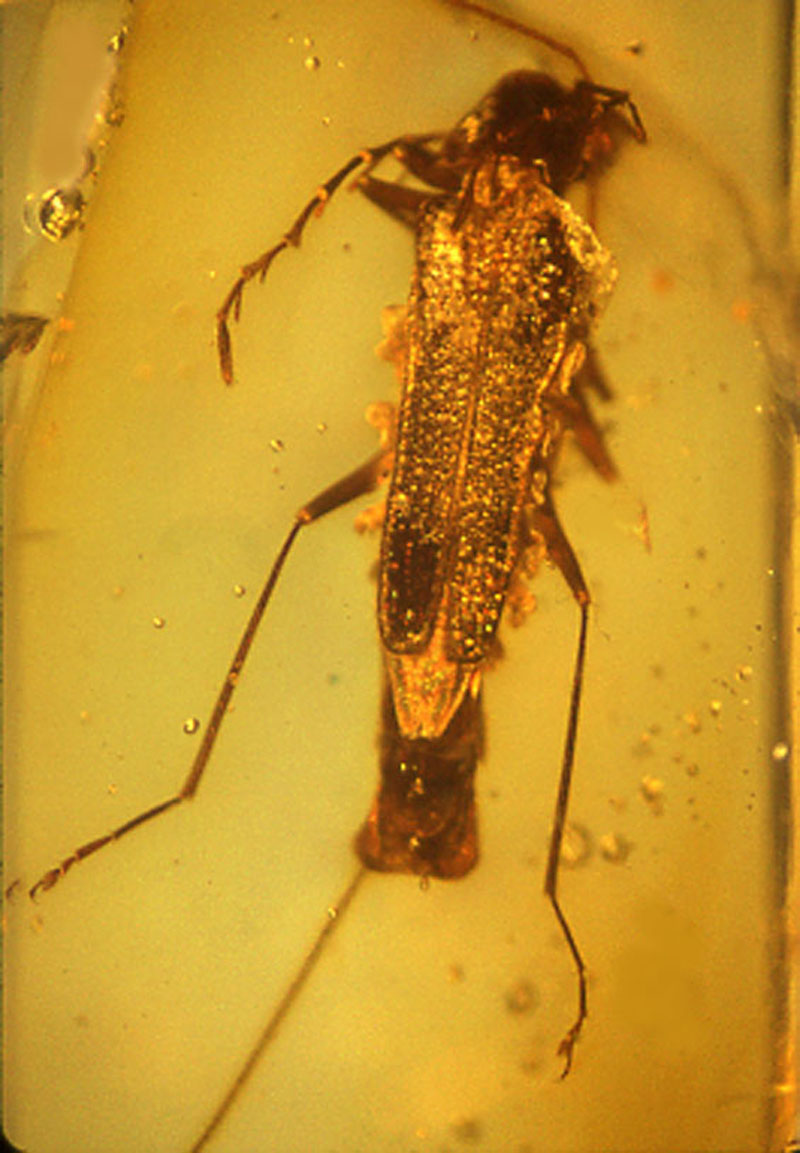 An ancient example of “chemical warfare” about 100 million years old is captured in this sample of amber, in which a soldier beetle is exuding a certain toxin to protect itself from an attacker. The sample was discovered by George Poinar, an OSU courtesy professor of zoology, and one of the world’s experts on prehistoric life forms found preserved in amber.

“The chance of these circumstances all coming together at the exact right second was pretty slim,” said George Poinar, Jr., a courtesy professor of zoology at OSU and one of the world’s leading experts on distant life forms preserved in amber. “You have a prehistoric insect being attacked, using its defenses to ward off the predator and the whole event becoming captured in action as sap flowed down a tree. It’s quite remarkable.”

The beetle was a small insect, about one-quarter inch long, which may have been in the process of becoming lunch for a giant roach or some other larger insect that apparently was 2-3 inches long, judging by the length of an antenna from the other insect also found in the specimen. The other insect either escaped the sap or was preserved in a different piece of amber, in these samples of Burmese amber that came from the Hukawng Valley in Myanmar.

“This particular insect is now extinct, but the broader family of soldier beetles still exists, and they still use this same type of chemical defense mechanism,” Poinar said. “That this type of defense has been preserved through 100 million years of evolution is evidence that it works pretty well.”

At the time of this event in the Early Cretaceous Period, huge animals such as dinosaurs still dominated the Earth, but scurrying beneath them were early mammals and large numbers of terrestrial invertebrates, such as these insects. Soldier beetles, then as now, were omnivores that lived on things like aphids, other tiny insects or plant pollen. Among other things, this finding pushes back the known existence of this type of beetle by about 60 million years. And at that distant time, they had already evolved ways to defend themselves.

“This beetle was able to exude a sticky chemical substance that was irritating to potential predators, and caused them to go away or leave it alone,” Poinar said. “It could even conserve its excretions and control the direction of the defense; in other words, produce the substance only on its left rear side if that was where the attack was coming from.”

Building on these types of early defense mechanisms, Poinar said, modern insects now have a wide range of defensive chemical arsenals – things that are distasteful, nauseating or caustic, from chemicals such as phenols, aldehydes and ketones. Some contemporary soldier beetles can produce types of carboxylic acid, as well as triglycerides and glyceride esters.

In insects, these types of defensive mechanisms are often a key to their survival.

Amber provides a unique mechanism to preserve specimens such as this. Beginning as viscous sap from certain kinds of trees, it can trap small animals or other materials, acts as a natural embalming agent, and eventually can turn into a semi-precious stone that displays these ancient life forms in nearly perfect, three-dimensional form. The phenomena has been invaluable in scientific and other ecological research, allowing experts to help re-create more accurate pictures of ancient ecosystems based on the insect life that lived then.

“Insects give us a fascinating window to the world, and they are survivors,” Poinar said. “This particular species lived right on through the K-T Boundary at 65 million years ago, when the dinosaurs and many other species disappeared.”