XEUS, which stands for X-ray Evolving Universe Spectroscopy, aims to study the fundamental laws of the Universe. With unprecedented sensitivity to the hot, million-degree universe, XEUS will explore key areas of contemporary astrophysics: growth of supermassive black holes, cosmic feedback and galaxy evolution, evolution of large-scale structures, extreme gravity and matter under extreme conditions, the dynamical evolution of cosmic plasmas and cosmic chemistry.

Professor Martin Turner of the University of Leicester is also Chair of the XEUS International Steering committee. He said: “XEUS is an X-ray observatory 30-50 times more sensitive than XMM-Newton, which will be placed 1.5 million km from Earth, beyond the Moon, at the second Lagrangian point, a quiet stable location where the instruments can observe the universe undisturbed. 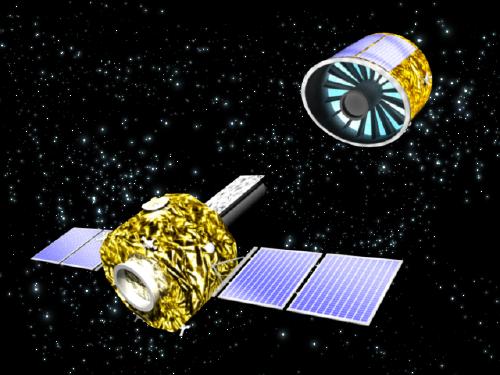 “XEUS has been selected for study by ESA as part of its Cosmic Vision programme. If the study outcome is successful it will be launched on Ariane 5 from Kourou in 2018.

"We have been developing the XEUS concept for an advanced X-ray observatory, for many years. This acceptance by ESA is a major step forward for X-ray astronomers all over the world."

"The million degree universe, where gravity is the main source of energy, is the finest physics laboratory we have. XEUS will help us find out about the behaviour of matter under extreme conditions of temperature, pressure, and gravity. It will also let us study the influence of black holes on the formation of galaxies and stars; and ultimately planets and ourselves."

Dr Richard Willingale, of the University of Leicester and chairman of the XEUS telescope working group said.

“XEUS will use new lightweight silicon optics to make the lens, the same material used to make silicon chips; one of the instruments has sensors cooled to within a tiny fraction of absolute zero to study the chemistry and physics of matter surrounding black holes.”

Various international Space Agencies have expressed interest in cooperation in XEUS and discussions will start by the end of the year to ensure the earliest involvement in study work.

All the candidate missions are now competing in an assessment cycle which ends in 2011. Before the end of the cycle, there will be an important selection foreseen in 2009. At the end of this process, two missions will be proposed for implementation to ESA's Science Programme Committee, with launches planned for 2017 and 2018 respectively.

The selected missions fit well within the themes of ESA's Cosmic Vision 2015-2025 plan. The themes range from the conditions for life and planetary formation, to the origin and formation of the Solar System, the fundamental laws of our cosmos and the origin, structure and evolution of the Universe.

“The maturity of most of the proposals received demonstrates the excellence of the scientific community in Europe. This made the task of the SSAC very difficult but we believe that the set of selected missions will shape the future of European space science,” said Tilman Spohn, chairperson of the SSAC (German Aerospace Center, Berlin). “The next decade will indeed be very exciting for the scientific exploration of space.”

“Technical feasibility and potential for successful cooperation with other agencies are two factors which are clearly evident in the Solar System missions that have been chosen,” added Nick Thomas at the Physikalisches Institut, Universität Bern, chair of the Solar System Working Group.