According to new research, two key proteins join together at the precise location where energy of motion is turned into electrical impulses. These proteins, cadherin 23 and protocadherin 15, are part of a complex of proteins called “tip links” that are on hair cells in the inner ear. The tip link is believed to have a central function in the conversion of physical cues into electrochemical signals.

“Mutations in [the genes] cadherin 23 and protocadherin 15 can cause deafness as well as Usher syndrome, the leading cause of deaf-blindness in humans,” says Professor Ulrich Mueller, of the Scripps Research Department of Cell Biology and Institute for Childhood and Neglected Diseases. “Age-related hearing loss in humans may also be related to problems in the tip links.” 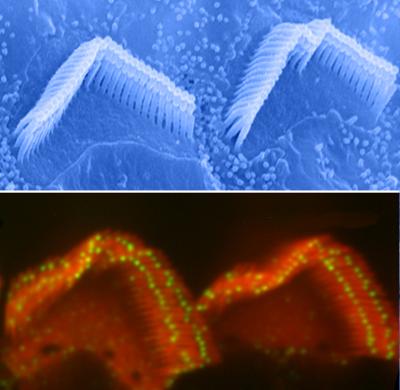 Top: Scanning electron microscopy shows the stair-step pattern of stereocilia. Bottom: Fluorescence microscopy image shows the presence of CDH 23 (green) at the point where each short stereocilium (red) meets the side of its taller neighbor. Credit: B. Kachar, National Institute on Deafness and Other Communication Disorders

“This team has helped solve one of the lingering mysteries of the field,” says James F. Battey, Jr., director of the National Institute on Deafness and Other Communication Disorders (NIDCD), one of the National Institutes of Health (NIH). “The better we understand the pivotal point at which a person is able to discern sound, the closer we are to developing more precise therapies for treating people with hearing loss, a condition that affects roughly 32.5 million people in the United States alone.”

The Physiology of Hearing and Deafness

Childhood and age-related hearing impairment is a major issue in our society. According to the NIDCD, one in three people older than 60 and about half of all people over 75 suffer some form of hearing loss. And about four out of every 100,000 babies born in the United States have Usher syndrome, the major cause of deaf-blindness.

Hearing is a classic example of a phenomenon called mechanotransduction, a process that is important not only for hearing, but also for a number of other bodily functions, such as the pereception of touch. It is a complicated process whereby spatial and physical cues are transduced into electrical signals that run along nerve fibers to areas in the brain where they are interpreted.

“Hearing is the least well understood of the senses,” notes Mueller.

We do know that sound starts as waves of mechanical vibrations that travel through the air from their source to a person's ear through the compression of air molecules. When these vibrational waves hit a person's outer ear, they go down the ear canal into the middle ear and strike the ear drum. The vibrating ear drum moves a set of delicate bones that communicate the vibrations to a fluid-filled spiral structure in the inner ear known as the cochlea. When sound causes these bones to move, they compress a membrane on one entrance of the cochlea and this causes the fluid inside to move accordingly.

Inside the cochlea are specialized “hair” cells that have symmetric arrays of stereocilia extending out from their surface. The movement of the fluid inside the cochlea causes the stereocilia to move. This physical change creates an electrical change and causes ion channels to open. The opening of these channels is monitored by sensory neurons surrounding the hair cells, and these neurons then communicate the electrical signals to neurons in the auditory association cortex of the brain.

In Usher syndrome and some other “sensory neuronal” diseases that cause deafness, the hair cells in the cochlea are unable to maintain the symmetric arrays of stereocilia.

A few decades ago, a molecular complex called the tip link was discovered in the stereocilia. These tip links connect the tips of stereocilia and are also thought to be important for the transmission of physical force to mechanically gated ion channels. For years, in part because stereocilia are extremely small, scarce, and difficult to handle, the molecules that made up the tip link remained elusive.

But a few years ago, Mueller and his colleagues identified one of the key proteins that formed the tip link-the protein cadherin 23. In their March 26, 2004, Nature article, Mueller and colleagues showed that the protein cadherin 23 was expressed in the right place in the hair cell to be part of the tip link, that it had the correct biochemistry, and that it seemed to be responsible for opening the ion channels. They also showed that cadherin 23 protein formed a complex with another protein called myosin 1c, which helped to close the channel once open.

“The current study provides a higher degree of resolution than the 2004 study, thanks to a collaboration with NIH Researcher Bechara Kachar and Scripps Research Professor Ron Milligan and his advanced imaging facilities,” says Mueller. “Now, we put to rest any doubts about the details of our findings.”

The current study used three lines of evidence to demonstrate that cadherin 23 and protocadherin 15 unite and adhere to one another to form the tip link.

The researchers first created antibodies that would bind to and label short segments on the cadherin 23 and protocadherin 15 proteins in the inner ears of rats and guinea pigs. Using immuno-fluorescence and electron microscopy studies, they showed that cadherin 23 was located on the side of the taller stereocilium and protocadherin 15 was present on the tip of the shorter one, with their loose ends overlapping in between. The researchers were able to identify both proteins by removing an obstacle to the antibody-binding process: calcium. Under normal conditions, cadherin 23 and protocadherin 15 are studded with calcium ions, which prevent antibodies from binding to the targeted sites. When calcium was removed through the addition of a chemical known as BAPTA, both labels became visible.

Next, the researchers built a structure resembling a tip link by expressing the cadherin 23 and protocadherin 15 proteins in the laboratory and watching how they interacted. When conditions were right, the two proteins wound themselves tightly together from one end to the other in a configuration that mirrored a naturally occurring tip link. As with normal tip links, the structure thrived in calcium concentrations that paralleled those found in fluid of the inner ear, while a drastic reduction in calcium disrupted the structure.

Lastly, the scientists found that one mutation of protocadherin 15 that causes one form of deafness inhibited the interaction of the two proteins, leading them to conclude that the mutation reduces the adhesive properties of the two proteins and prevents the formation of the tip link. In a second mutation of protocadherin 15, the tip link was not destroyed; the scientists suggested that the deafness is not likely caused by the breakup of the tip link but by interference with its mechanical properties.

Knowing precisely the composition and configuration of the tip link, scientists can now explore how these proteins interact with other components to form the rest of the transduction machinery. In addition, scientists can study how new treatments might be developed to address the breaking up of tip links through environmental factors, such as loud noise.

In addition to Mueller, other authors of the study, “Cadherin 23 and protocadherin 15 interact to form tip-link filaments in sensory hair cells,” were: Piotr Kazmierczak, Elizabeth M. Wilson-Kubalek, and Ronald A. Milligan of The Scripps Research Institute, and Hirofumi Sakaguchi,, Joshua Tokita, and Bechara Kachar of the Laboratory of Cellular Biology, National Institute on Deafness and other Communication Disorders, National Institutes of Health.