A tiny galaxy,SDSSJ0737+3216 (lens redshift 0.3223, source redshift 0.5812), nearly halfway across the universe and the smallest in size and mass known to exist at that distance, has been identified by an international team of scientists.

The scientists used data collected by NASA's Hubble Space Telescope and the W. M. Keck Observatory in Hawaii. This galaxy is about half the size, and approximately one-tenth the "weight" of the smallest distant galaxies typically observed, and it is 100 times lighter than our own Milky Way.

"Even though this galaxy is more than six billion light years away, the reconstructed image is as sharp as the ordinary ground-based images of the nearest structure of galaxies, the Virgo cluster, which is 100 times closer to us," said lead author Phil Marshall, a postdoctoral fellow at UC Santa Barbara. 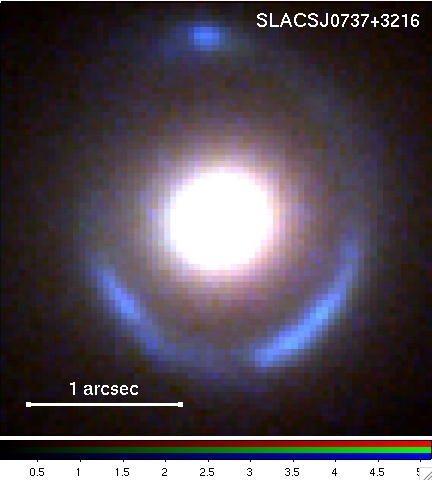 Color composite image of the gravitational lens system, made from Hubble (blue and green) and Keck (red) data. The blue ring is the tiny background galaxy, stretched by the gravitational pull of the foreground lens galaxy at the center of the image.

Second author Tommaso Treu, assistant professor of physics at UCSB, explained that the imaging is made possible by the fact that the newly discovered galaxy is positioned behind a massive galaxy, creating an "Einstein ring." The matter distribution in the foreground bends the light rays in much the same way a magnifying glass does. By focusing the light rays, this gravitational lensing effect increases the apparent brightness and size of the background galaxy by more than a factor of 10.

Treu and his colleagues in the Sloan Lens ACS Survey (SLACS) collaboration (http://www.slacs.org) are at forefront of the study of Einstein ring gravitational lenses. With gravitational lensing, light from distant galaxies is deflected on its way to Earth by the gravitational field of any massive object that lies in the way. Because the light bends, the galaxy is distorted into an arc or multiple separate images. When both galaxies are exactly lined up, the light forms a bull's-eye pattern, called an Einstein ring, around the foreground galaxy.

The mass estimate for the galaxy, and the inference that many of its stars have only recently formed, is made possible by the combination of optical and near infrared images from the Hubble Space Telescope with longer wavelength images obtained with the Keck Telescope. "If the galaxy is representative of a larger population, it could be one of the building blocks of today's spiral galaxies, or perhaps a progenitor of modern dwarf galaxies," said Treu. "It does look remarkably similar to the smallest galaxies in the Virgo cluster, but is almost half the way across the universe."

Another key aspect of the research is the use of "laser guide star adaptive optics." Adaptive optics systems use bright stars in the field of view to measure the Earth's atmospheric blurring and correct for it in real time. This technique relies on having a bright star in the image as well, so it is limited to a small fraction of the night sky. The laser guide star adaptive optics system in place at the Keck Telescope uses a powerful laser to illuminate the layer of sodium atoms that exist in the Earth's atmosphere, explained Jason Melbourne, a team member from the Center for Adaptive Optics at the University of California, Santa Cruz. The laser image acts as an artificial star, bright enough to perform adaptive optics correction at an arbitrary position in the sky, thus enabling much sharper imaging over most of the sky.