Ilia Ivanov and Dave Geohegan of Oak Ridge National Laboratory's Nanomaterials Synthesis and Properties Group have been collaborating with John Simpson of the Superhydrophobic Materials Group and Cheol Park and Joycelyn Harrison of the National Institute of Aerospace in NASA's Langley Research Center to produce a Flexible, Integrated, Lightweight, Multifunctional skin, called FILMskin, for next-generation prosthetic hands and arms.

Their challenge is to make a revolutionary skin using superhydrophobic material with thin layers of carbon nanotubes to mimic skin's properties, allowing the prosthetic wearer to feel heat, cold and touch.

The ORNL researchers' task is to develop material that matches real skin's thermal properties and, then, a temperature sensor, whereas NASA's task is to develop advanced pressure sensors. Together, the two organizations will produce a one-inch-square patch of a lightweight, durable FILMskin composite of a polymer and carbon nanotubes, which will exhibit multifunctionality not possessed by current prosthetic coverings.

The complex makeup of warm human skin is revealed in a thermal image of the hand, which displays different colors indicating different skin temperatures.

"By exploiting carbon nanotubes' ability to conduct heat, we will create nanocomposites with the thermal conductivity of muscle, fat or skin. We recently showed that, with only 8 volume percent of nanotubes, we can make a polymer composite with a thermal conductivity that far exceeds conductivities of different tissues."

After creating thermally conductive polymer patches, the researchers will incorporate an array of vertically aligned nanotubes (VANTAs) to conduct heat quickly in the direction of the nanotube alignment to temperature sensors. Ivanov recently demonstrated that a heat pulse travels 20 times faster in a polymer containing VANTAs than in a pure polymer, indicating that the time response of temperature sensors positioned under the skin can be greatly improved.

The next step is to design sensors that detect temperature and pressure differences in FILMskin. Nanotubes could be used for temperature sensing because their electrical resistance changes when exposed to temperature changes. NASA's Park has shown that nanotubes can be dispersed in a novel biocompatible polyimide material and is now working on making the nanocomposite more responsive to pressure. 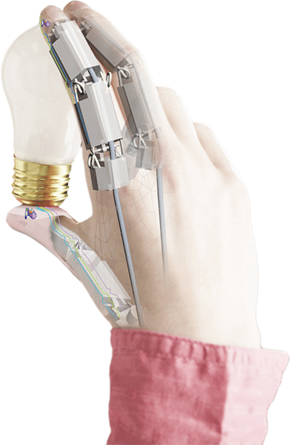 Says Ivanov: "DARPA wants to move really fast from basic research results to implementation of the concepts it selects."