New research in carbon nanotechnology could give those in the line of fire materials which can bounce bullets without a trace of damage. Add in some moral certainty, a Commodore Amiga for the special effects and pithy one liners and we could have Robocop.

A research paper published in the Institute of Physics’ Nanotechnology details how engineers from the Centre for Advanced Materials Technology at the University of Sydney have found a way to use the elasticity of carbon nanotubes to not only stop bullets penetrating material but actually rebound their force.

Most anti-ballistic materials, like bullet-proof jackets and explosion-proof blankets, are currently made of multiple layers of Kevlar, Twaron or Dyneema fibres which stop bullets from penetrating by spreading the bullet’s force. Targets can still be left suffering blunt force trauma - perhaps severe bruising or, worse, damage to critical organs. 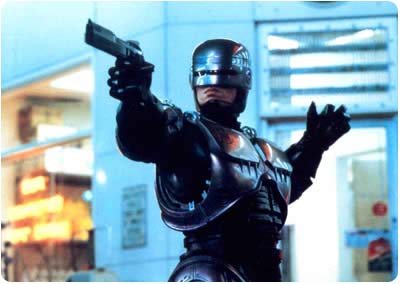 The elasticity of carbon nanotubes means that blunt force trauma may be avoided and that’s why the engineers in Sydney have undertaken experiments to find the optimum point of elasticity for the most effective bullet-bouncing gear.

Prof Liangchi Zhang and Dr Kausala Mylvaganam from the Centre for Advanced Materials Technology in Sydney, said, “By investigating the force-repelling properties of carbon nanotubes and concluding on an optimum design, we may produce far more effective bulletproof materials.

“The dynamic properties of the materials we have found means that a bullet can be repelled with minimum or no damage to the wearer of a bullet proof vest.”

Working at the scale of a nanometre (one billionth of a metre), condensed matter physicists engineer structures that manipulate individual atomic and molecular interactions. Working at this microscopic scale allows engineers to design fundamentally different and useful materials.

One of these materials is nanotubes, a one-atom thick sheet of graphite, rolled into a cylinder that is held together by a very strong chemical bond called orbital hybridisation.

Nanotubes bind together into a strong ‘rope’ because of the Van der Waals force they share. Van der Waals is the weak attraction that molecules have for one another when they are brought close together, used, for example, by geckos when they stick to a ceiling.