A campaign by conservationists has helped save one of Africa’s unspoilt forests from massive development for biofuel.

Mabira Forest Reserve is about eight miles north of Lake Victoria. Logging began in 1906 and damage from intensive coffee, banana cultivation and charcoal production continued until 1988 when many people were evicted from the forest. The illegal collection of plants and timber, and charcoal burning, continues on a reduced scale. More recently the Ugandan government was considering making some of the land developers, as much as one third of the Reserve, that was desired by sugar cane companies, including the influential Mehta Group, for large-scale production of ethanol.

The plan to ‘de-gazette’ and fell 17,500 acres (7,100 hectares) of Mabira would have breached a World Bank deal safeguarding the reserve and may have flouted the country’s constitution. 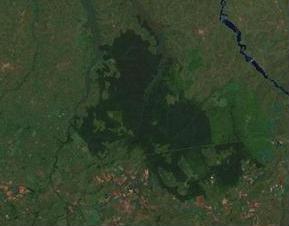 Satellite image of Mabira, the dark green forest separating it from the surrounding farmland

The forest hosts one third of Uganda’s bird life including 75 species found no-where but the Guinea Congo Forest of which Mabira is a remnant. “This is a tragedy averted,” said Paul Buckley, Head of the RSPB’s Africa Programme. “It was ludicrous even to think of sacrificing such a precious site to a crop that is already so heavily subsidised in Uganda. The forest would have been irreversibly damaged had this give-away gone ahead.

“This announcement could not be more timely with the eyes of the world on Uganda before the Commonwealth Head’s of Government Meeting next month. Now Uganda has a brilliant opportunity to really make the most of its wildlife jewels. The site is famous with eco-tourists and slicing it up made no economic sense whatsoever.”

The Ugandan Finance Minister, Dr Ezra Suruma, announced at an official dinner that the forest give-away had been scrapped. “We have committed ourselves to conserving Mabira Forest. There is other land in Uganda suitable for sugar cane growing,” he said.

The news was welcomed in Uganda where shadow environment minister, Beatrice Anywar, said: “That is really good news…It would have been a shame to violate what matters to the rest of the world.” Emmanuel Ssendawula, premier of the Buganda Kingdon, which surrounds Mabira, added: “This has been everyone’s prayer and the crusade should continue.”

The 75,000-acre (30,000-hectare) Mabira forms the eastern part of the Guinea Congo Forest in central Africa. It is classified as an Important Bird Area by BirdLife International. It hosts almost 300 bird species including the globally threatened Nahan's francolin, which is similar to the partridge.

Eco-tourism is now Uganda’s second largest foreign exchange earner with 62 per cent of income from visits to Uganda’s forest reserves coming from Mabira. Under the 2001 World Bank agreement, the bank pledged funds for construction of a hydroelectric dam on the River Nile in return for a government promise to protect Mabira.

A study by Nature Uganda earlier this year is thought to have prompted the government’s decision. It showed that income from conserving Mabira would dwarf the profits anticipated from sugar cane production and pinpointed other land suitable for sugar cane cultivation.

The report also highlighted the forest’s 300 bird species and 200 different trees, and its nine endemic species including the rare grey-cheeked mangabey, a type of monkey. It stresses its role in storing carbon and water. Mabira buffers Lake Victoria from industrial pollution and provides food, medicine, wood and jobs to 120,000 people living nearby.

The RSPB’s partner in Uganda, Nature Uganda, is jubilant at the decision to save the forest. Executive Director, Achilles Byaruhanga, said: “The economy of Uganda depends on the country’s environmental health. Agriculture, tourism and fisheries are core to our wellbeing making environmental protection an overriding factor in our development.”

Mathias Kigongo, a district councillor for Naja sub-County, which is next to Mabira, said jobs would have been lost if the sugar cane plans had gone ahead. “We feel the forest should not be touched. The benefits from sugar cane cannot be equivalent to what we would lose.”

Ato Mengistu Wondafrash, of Birdlife International’s Africa Partnership, said: “We applaud the Ugandan government for taking this bold decision to protect its forest resources despite the intentions of the sugar company. I cannot wait to go for another walk in Mabira now that the axe no longer hangs over so much rare and beautiful wildlife.”

Mabira is home to a number of mammal species found only in the region, including the recently identified grey-cheeked mangabey, a type of monkey, and the short-tailed fruit bat. The Prunus africana tree grows throughout Mabira and is used to treat prostrate cancer.

- The value of existing forestry alone is put at $568 million US by the National Forestry Authority.

- The commercial value of Mabira Forest is estimated at over $US316 million not including its value from wildlife and other environmental services, such as water catchment protection and carbon storage.

- At current sugar production levels, the forest would yield a maximum of 35,784 tonnes in the next three years, worth less than $20 million US.

- It protects the water catchment area for Lake Victoria, Lake Kyoga and the River Nile.

- The World Bank is helping to fund an hydroelectric dam at Bujagali Falls on the Upper Nile in Jinga, very close to Mabira. Conservation of Mabira is a condition of the 2001 deal, as compensation for environmental damage that will be caused elsewhere by the dam's construction. The contract says: “..the Government of Uganda undertakes to conserve through sustainable management program/budget, the present ecosystem of the Mabira Forest Reserve and those portions of the Mabira Forest Reserve…”