Yes, last week science said Song Debunked: Breaking Up Actually Not So Hard To Do but it's a new week and this is a different study.

They use the same song example, though.

Dr. Bronwen Lichtenstein, UA assistant professor of criminal justice who specializes in women’s issues, recently completed a study of the health risks women over age 35 faced when they returned to the dating scene after the breakup of a long-term relationship.

Lichtenstein was investigating the theory that after an older woman leaves a long-term relationship she may make risky dating choices. “Being in a relationship for 20 years means you have no idea what the dating scene is like today,” she said. 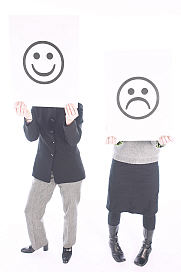 Can science please tell us what we are supposed to think about breaking up?

Lichtenstein surveyed women in the West Alabama area and found that these women – many of them like your mother or your grandmother – often faced depression, lack of health information, and lack of social support after their relationships ended.

How did they cope with starting over? Well, it may start with food, Lichtenstein found. “One of the most interesting things for me was that they told me they often meet people in grocery stores. There’s a whole dating scene for this age group going on in Wal-Mart and Publix,” she reports.

The hooking-up over food phenomenon may be happening because there are few, if any, places where older people can meet. “Young people have places to go to meet one another and that doesn’t exist for a lot of older people -- some may be embarrassed to go to church groups for singles or they may feel that the groups are for younger people,” Lichtenstein said.

Lichtenstein looked at how these women, who were recently divorced or widowed, were equipped with the proper health information about the spread of sexually transmitted diseases when dating. “Women are biologically more at risk for STDs at 50 than at 20, and most women don’t realize it,” the UA College of Arts and Sciences professor noted.

Almost all the women in the study reported being depressed after ending a relationship, and at least half the women had been diagnosed with a sexually transmitted infection. The women faced biological, emotional and personal issues, although the real problem is that the issues are not being addressed, Lichtenstein found.

“There is a lot of uncertainty and anxiety in returning to the dating scene – women ask ‘Am I attractive?’ and ‘What are the rules?’ – but nobody knows what the rules are because everything’s changed,” she said.

Who fares the best the second time around?

“Women who are confident and assured of themselves seem to deal with these relationship issues better. They may not be in a better place, but they find other things to do and find a satisfying life on their own.

“A good example of this is a 62-year-old woman who joined a motorcycle club and began a wonderful social life. Another example would be a woman who never married but owned her own business and had a lot of friends,” she said.