The universe’s clock has neither a start nor finish, yet time is still finite, according to a New Zealand theorist.

To understand that, we need to take a “cyclic” view of time similar to the one held by ancient thinkers like Plato, Aristotle and Leonardo da Vinci, rather than the Christian Calender and Bible-influenced belief in “linear” time so deeply imbedded in modern western thinking.

This theory, which tackles the age-old mystery of the origin of the universe, along with several other problems and paradoxes in cosmology, essentially calls for a new take on our concept of time.

Following its initial publication on the arXiv physics archive at Cornell University earlier this year, the author of the theory, Peter Lynds, will present a second paper about it at the International Conference on Complex Systems in Boston on the 1st of November. 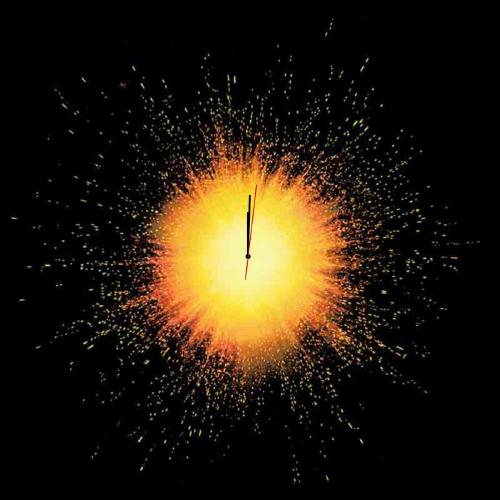 "A good way to think about it is to picture a clock, with the big bang being at time %3D 0, the universe beginning to contract at 6 o'clock, and the big crunch being at 12 o'clock. Just before 12, the clock resets and immediately resumes at 0. Although the hands of the clock will continue to rotate indefinitely, it is the very same 12 hour interval that plays over, not a later one%3B there are no past or future cycles of the universe. It is one and the same." Credit: Bryce Glover

Lynds’ theory involves the second law of thermodynamics, a bedrock of physics and the explanation behind why we only ever experience events evolving in one time direction in nature. This law is related to the fact that heat can never pass spontaneously from a colder to a hotter body. As a function of heat’s ability to disperse, hot flows to cold. Because of this, natural processes that involve energy transfer tend to have one direction and to be irreversible. However, what would happen if, due to certain extreme physical conditions, heat was unable to flow to cold and was forced to flow to hotter?

In his theory, Lynds posits that rather than this inevitably happen and the second law of the thermodynamics be breached just before the universe gravitationally collapses to a big crunch or matter reaches the centre of a black hole, the order of events should reverse direction.

This is contrast to previous theories involving thermodynamic time reversal, including those by Thomas Gold in the 1960s and Stephen Hawking in the 1980s, which all involve the second law of thermodynamics being breached. Such theories have generally been dismissed by physicists because of contradictions directly resulting from such a second law violation – contradictions that Lynds says his theory avoids.

Lynds asserts that if many billions of years from now the universe stops expanding and contracts to a big crunch, such a revised conception of thermodynamic time reversal leads to a coherent picture of the cosmos in which there is no differentiation between past and future, and the so-called beginning of the universe, the big bang, can equally be said to be in the past or future of the big crunch. This means that the big bang and the big crunch can also equally be said to cause one another, therefore providing an answer to that most intractable of questions: what caused the big bang?

Furthermore, because events are always evolving away, rather than ever towards one, there are no gravitational “singularities” – hypothesized points where gravity and heat become infinite and the laws of physics break down.

Aside from proposed avoidance mechanisms in theories such as String theory and Loop quantum gravity, singularities have been a troublesome but inescapable feature of mathematical physics ever since the 1960s when work by Sir Roger Penrose and Stephen Hawking showed that they must result at the big bang, the big crunch, and inside black holes – provided Albert Einstein’s general theory of relativity is correct and some basic assumptions are met. One of the assumptions underlying the Penrose and Hawking singularity theorems is that events and times converge towards a singularity.

In Lynds’ theory, events and times are always diverging or evolving away from a potential singularity, so none are encountered. “The reversal of the order of events so that the second law of thermodynamics can continue to hold, would appear to be a very good way on Nature’s part of avoiding singularities, while also guaranteeing that the universe can remain continuous and without causal contradiction,” says Lynds.

Significantly, the theory also addresses a famous paradox posed by the 18th-century German philosopher Immanuel Kant, which concludes that the idea of the universe extending back infinitely in time is contradictory, while its antithesis – the idea that the universe began at some finite time in the past – also results in contradiction.

Kant asked that if the universe did have a beginning, what happened beforehand to cause it? And what before that? Kant noted that there would always be an infinite number of “what before that’s.” On the other hand, if time extended back forever, there would be an infinite period of time before any event – something that Kant also considered absurd.

“With a universe that stretches back infinitely in time and has no starting point, it would also be impossible for the universe to evolve forward, not only to where it is today, but at all,” says Lynds. Because his theory asserts that the universe is finite, but yet also has no beginning or first cause (because the big bang is caused by the big crunch, which would normally be thought of as being in the future of the big bang), Kant’s paradox disappears.

“A universe in which time is cyclic is really the only possible answer to a paradox such as Kant’s,” says Lynds. “In relation to how telling it is, I do not think that people have generally realised just what a perfect paradox Kant put forward. It shows that there is something very much going wrong with our regular assumptions regarding time, cause and cosmology.”

The detail behind what causes the reversal is also non-quantitative and speculative, while the paper in general is a bit awkward, it sitting somewhere between physics and philosophy, and moving over some different areas. It is a bit of an ugly duckling, in that it doesn’t neatly fit anywhere.”

From a historical perspective, Lynds notes the idea that time might be cyclic is an old one and was very popular in ancient times.

“In relation to it being an old idea, the saying “there is nothing new under the sun” is itself actually from a passage about cyclicity in the book of Ecclesiastes circa 250BC,” says Lynds. “It wasn’t until the Middle Ages when Christianity really took hold in Europe and the Christian Calendar became firmly established, that the view of time being linear and going in a straight line, the one we are all now so familiar with in modern western society, actually became prominent. Indeed, around this period, a belief in time being cyclic was actually outlawed by the Catholic Church and chargeable as blasphemy, as it was opposed to the unique chronology of events described in the Bible; a drama that, according to scripture, takes place only once.”

Lynds says he is expecting his theory to be controversial – a theory that he has only now begun to pursue after it came to him one night in 1998 while laying in bed. Lynds, a 31-year-old who is without university qualification, is familiar with controversy, with another theory causing waves in 2003.

That theory also involved questioning long-held assumptions about time and physics – the existence of instants in time and of time in general – and another famous problem, Zeno’s paradox.

“I doubt that people who believe the universe was created will like it as it leaves no place for a Creator, while due to its nature and some of the questions involved, I feel it will probably invite cynicism from some as well. It is also very counterintuitive, requiring one to see beyond a number of deeply imbedded intuitions and assumptions regarding time. For the moment, I’m more just happy to get it out there.”

About Lynds’ theory, Dr. Paul Frampton, Louis D. Rubin Jr. Distinguished Professor of Physics at the University of North Carolina at Chapel Hill, says, “I enjoyed reading Lynds’ article about an endless and beginningless universe, especially as I have myself worked on such a model recently (Phys. Rev. Lett. 98, 071301, 2007). Lynds addresses the key issue of the second law of thermodynamics in a novel way and I'll be curious to see how far he can take it.”

Dr. Jonathan Vos Post, a former Professor of Astronomy at Cyprus, College. California, and Professor of Mathematics at Woodbury University, California, says, “I consider Peter Lynds's arXiv paper to be a bold and magnificent speculation. Those who attack him are misguided, in that Peter Lynds’ arguments need to be put in proper historical context, which is apparently outside the educational background of those who prematurely dismiss the subtleties of Peter Lynds insights. Let me refer back to an 1895 paper by the immortal [Ludwig] Boltzmann, which has recently attracted attention in the controversy over so-called "Boltzmann Brains.” The reference is Nature 51, 413 (1895). [Long quote by Ludwig Boltzmann concerning the second law of thermodynamics and the possibility of universe later returning to its present state]. Peter is cursed with having brilliant theories that his detractors falsely assume are based on ignorance. His startling re-analyses of (1) Zeno's paradox, (2) the nature of Time, and (3) the nature of consciousness, have been spuriously opposed by naive critics who claim that Peter does not know (1) Calculus, (2) Relativity, (3) Psychology. To the contrary, I hold that his ability to ask "simple" questions, and give extraordinary answers, is close in many ways to the genius of Einstein, Feynman, Hawking, Paul Erdos, John Wheeler, Stephen Wolfram, and Frank Zappa.”

Dr. Werner Israel, a Professor of Physics and Astronomy at the University of Alberta, Canada, and a Fellow at Canada’s Institute for Advanced Study Cosmology and Gravity Programme, says, “I found Peter Lynds' ideas on possible reversals of time's arrow interesting, in part because I have entertained less bold but not dissimilar ideas myself. In 1991 I co-authored a note in Nature which speculated on the possibility that the growth of entropy near a big crunch might be, not reversed exactly, but enormously diluted by a process called mass inflation at the inner horizons of coalescing black holes. This would make a transition to an expanding phase very nearly reversible thermodynamically.”

For a more detailed version of this summary, including further implications, see his website ( but for pdf, replace .doc with .pdf).