Astronomers at the University of Rochester have discovered five Earth-oceans’ worth of water that has recently fallen into the planet-forming region around an extremely young, developing star.

Dan Watson, professor of physics and astronomy at the University of Rochester, believes he and his colleagues are the first to see a short-lived stage of protoplanetary disk formation, and the manner in which a planetary system’s supply of water arrives from the natal envelope within which its parent star originally formed.

The findings, published in today’s Nature, are the first-ever glimpse of material directly feeding a protoplanetary disk. 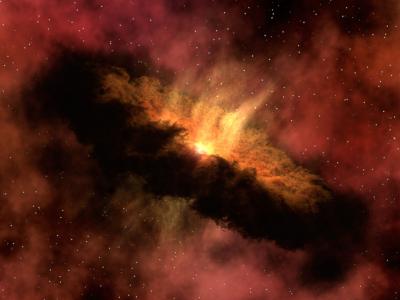 Artist's rendition of the forming system at IRAS4B. Credit: JPL/CalTech

The embryonic star in question, called IRAS 4B, lies in a picturesque nebula called NGC 1333, about 1000 light years from Earth. It is one of an initial list of 30 of the youngest “protostars” known, which Watson and his team examined with the Spitzer Space Telescope’s infrared spectrograph for signs of very dense, warm material at their cores. It is also the only one of the thirty to show signs of such material, signaled by the infrared spectrum of water vapor. The watery characteristics of IRAS4B’s infrared spectrum can best be explained by material falling from the protostar’s envelope onto a surrounding, dense disk. This setup, called by astronomers a “disk-accretion shock,” is the formative mechanism of the disks within which all planetary systems are thought to originate.

“Icy material from the envelope is in free-fall, reaching supersonic speeds and crashing into the protoplanetary disk.” says Watson. “The ice vaporizes on impact, and the warm water vapor emits a distinctive spectrum of infrared light. That light is what we measured. From the details of the measured spectrum we can tease out the physical details of this brand-new, pre-planetary disk”

Among the details derived so far are the rate of “rainfall” onto the disk – about 23 Earth masses per year – and the characteristics of the “puddle” on the disk’s surface: The surface is 170 degrees Kelvin (153 degrees below zero Fahrenheit), and at that temperature there is about an Earth’s mass worth of material, including enough water to fill Earth’s oceans about five times. The area of the “puddle” is such that, if circular and centered on the Sun, its perimeter would be just beyond the orbit of Pluto. Results such as this will help astronomers assess the early planet-forming potential of IRAS4B’s disk, and by inference learn about the earliest stages of our solar system’s life.

There are astro-chemical implications of the observations as well. “There are lots of primitive icy bodies in our solar system, and the ice they carry is often thought to descend directly from the interstellar medium, so that by studying one we could learn about the other,” says Watson. “But in NGC 1333 IRAS 4B’s disk, it is clear that the water is received as vapor and will be re-frozen under different conditions, and this means that the oxygen and hydrogen chemistry of its disk is reset from interstellar conditions. It’s not getting pristine, interstellar ice.” Astronomers at the University of Rochester, including Watson and co-author professor William Forrest, helped design the “eyes” of Spitzer specifically to look for objects like IRAS 4B and its water because such objects sit in an astronomer’s blind spot. Called “Class Zero Protostars” for their extreme youth, these objects radiate substantial light only at long infrared wavelengths, which our atmosphere inconveniently blocks from ground-based telescopes. When Watson and his team first planned their Spitzer observations, only 50 class-zero protostars were known, and the team selected the 30 brightest. But Watson says that’s just the beginning. Astronomers now know of hundreds of such objects, and Watson expects to have thousands to investigate in the coming years.

Another characteristic makes the otherwise un-noteworthy IRAS 4B a rarity. It is oriented with its axis pointed almost directly at Earth, splaying out its entire disk to our view and simplifying the process of plumbing its secrets. Only a small fraction of the future candidates are expected be similarly oriented, keeping the search for lots more “raining protostars” a challenge.

This work was supported in part by NASA through the Spitzer-IRS Instrument Team, Origins and Astrobiology programs, and by the National Science and Technology Council of Mexico.