The central United States has undergone a dramatic increase in seismicity over the past 6 years. From 1973-2008, there was an average of 24 earthquakes of magnitude 3 and larger per year. From 2009-2014, the rate steadily increased, averaging 193 per year and peaking in 2014 with 688 earthquakes. So far in 2015, there have been 430 earthquakes of that size in the central U.S. region through the end of May.

There are many questions and misconceptions about what’s happening. How does the observed increase relate to oil and gas production activities? Does this connect to fracking—more formally known as hydraulic fracturing? What exactly is fracking? What are induced earthquakes?

USGS scientists recently published an article that explains what is causing these seismic events and addresses common misunderstandings. The article is published in the Seismological Research Letters journal. 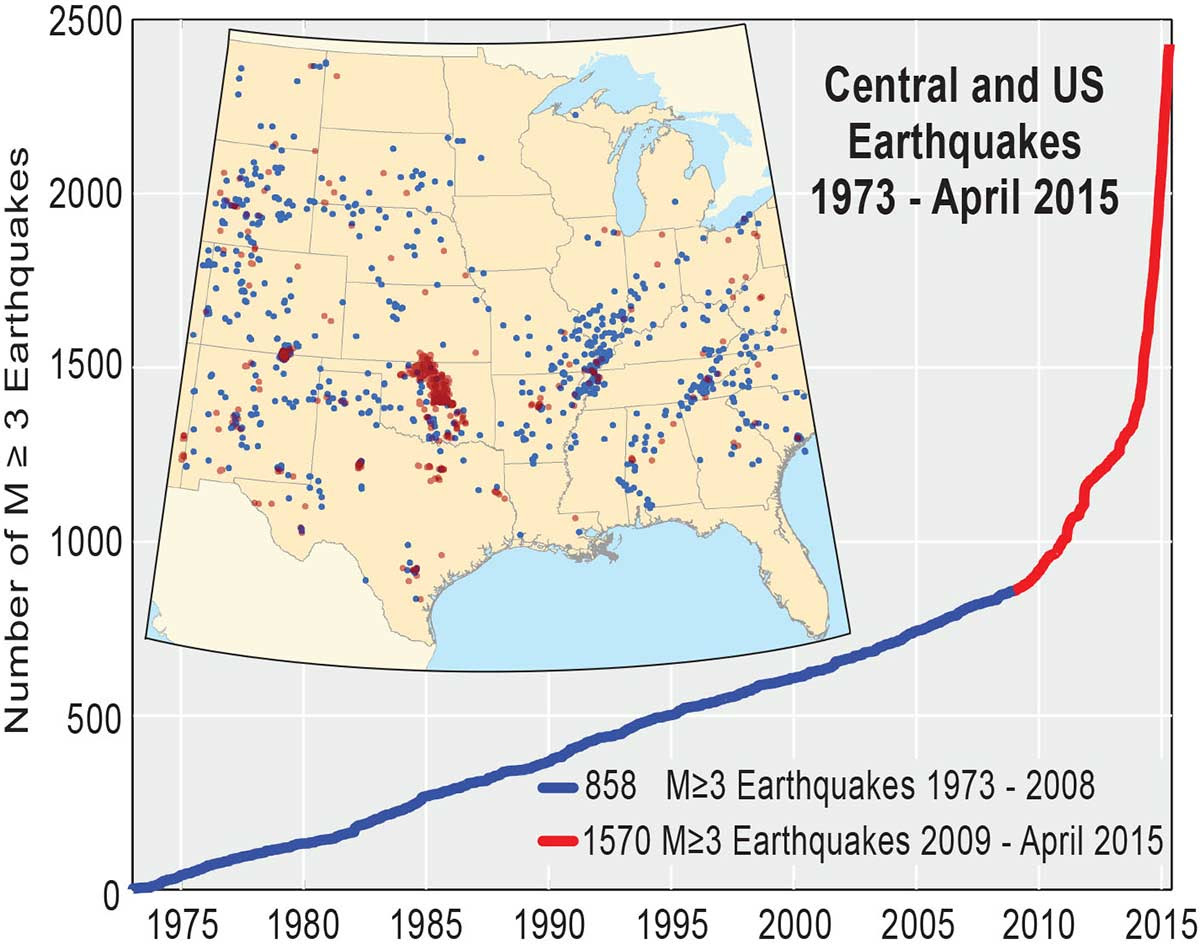 Fact 1: In the United States, fracking is not causing most of the induced earthquakes. Wastewater disposal is the primary cause of the recent increase in earthquakes in the central United States.

Fact 3: Wastewater is produced at nearly every oil and gas well, not just hydraulic fracturing sites.

Most wastewater currently disposed of across the nation is saltwater that is a byproduct of the oil and gas extraction process. Saltwater is found in nearly every oil and gas production well, regardless of whether the well has been hydraulically fractured.

Fact 4: The content of the wastewater injected in disposal wells is highly variable.

In contrast, the fluid disposed of near earthquake sequences that occurred in Youngstown, Ohio and Guy, Arkansas, consisted largely of spent hydraulic fracturing fluid.

Fact 5: Induced seismicity can occur at significant distances from injection wells and at different depths.

In operations where engineers pour fluid down the well without added pressure at the wellhead still increase the fluid pressure within the formation and thus can induce earthquakes.

Why is This Happening Now?

Next Steps: Start with Science

Moving into the future, scientists continue to develop new strategies to help reduce the chances of damaging induced earthquakes.The USGS is dedicated to research leading to a detailed understanding of the physical processes involved in inducing earthquakes.

The USGS has developed preliminary methods to estimate the earthquake hazard associated with induced events. The models calculate how often induced earthquakes are expected to occur in the short term and how hard the ground will likely shake as a result. USGS scientists are working to further refine these models.

Close cooperation between scientists, regulators and industry will be necessary to mitigate the hazard from induced earthquakes. Of particular importance is making data on injection pressures and flow-rates freely available. With these data, scientists will be better able to assess the changing hazard from injections, potentially allowing operators to prevent damaging earthquakes from occurring.