It's always a good idea to reduce cost and radiation and when it comes to kids and chest X-rays, that cost reduction should be happening a lot more.

The authors of a new analysis reviewed data from 719 pediatric chest X-ray exams ordered between 2008 and 2014 in Mayo Clinic's inpatient, outpatient and emergency room settings. The patients undergoing the exams ranged in age from newborn to 17 years old. Of the 719 X-ray exams, 377 exams were ordered for chest pain, 98 indicated syncope (fainting) or presyncope, 21 indicated spells (a general feeling of being unwell or under distress), 37 indicated postural orthostatic hypotension (POTS)--a condition in which blood pressure drops suddenly when the individual stands up from sitting or lying down, 185 indicated dizziness, and one exam indicated cyclical vomiting. Eighty-two of the 719 exams were excluded due to congenital or other known heart disease, and other causes.

The researchers found that in approximately 88 percent of the remaining 637 patients, the exam did not alter clinical treatment.

The problem is obviously defensive medicine. When it was just insurance companies paying the bills, and lawyers were waiting to pounce, an 'I want my doctors making decisions, not remote panels' mentality was in force. But now that all of America is paying for health care, and the costs have ballooned, people are scrambling to find ways to reduce treatments. Waste is a good place to start, though obviously tort reform would be needed as well. 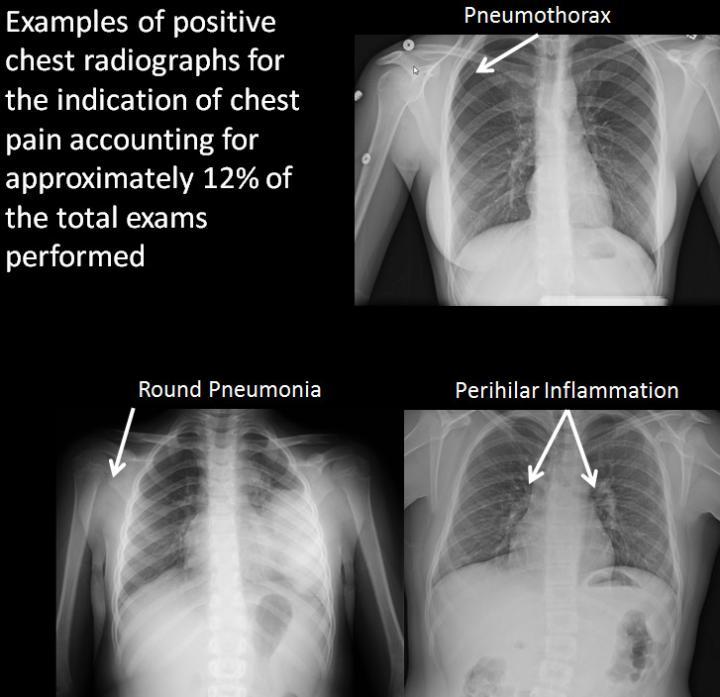 None of the patients who underwent X-rays for indications including syncope, spells, POTS, dizziness or cyclical vomiting had any finding that affected treatment. Thirty-nine of the 330 non-excluded X-rays for chest pain were positive for pneumonia, bronchial inflammation, trauma, or other conditions.

"Chest X-rays can be a valuable exam when ordered for the correct indications," said Ann Packard, M.D., radiologist at the Mayo Clinic in Rochester, Minnesota, who co-authored the paper with Kristen B. Thomas, M.D., head of the pediatric division at Mayo Clinic and assistant professor of radiology at Mayo Medical School. "However, there are several indications where pediatric chest X-rays offer no benefit and likely should not be performed to decrease radiation dose and cost.

"Approximately 12 percent of the chest X-rays for chest pain were positive and included respiratory symptoms such as cough, fever or trauma. There were no positive findings in any chest X-ray for syncope, dizziness, spells, cyclical vomiting or POTS for the past five years, even in our tertiary care center with referrals for rare diseases or unusual presentations." These are examples of negative x-rays which had no affect on treatment. Credit: RSNA

"This study addresses both of these issues, which is important not only for physicians but also for young patients and their parents," she said. "I would like this research to help guide clinicians and deter them from ordering unnecessary exams which offer no clinical benefit to the patient."

Presented at the Radiological Society of North America meeting.
News Articles
More Articles All Articles
About