News Staff
Colorectal carcinoma, colon cancer, is the third most common cancer in the United States.

A team of researchers from Freiburg and Stuttgart including the Freiburg biologists Dr. Ricarda Herr and Dr. Tilman Brummer analyzed the effect of B-Raf inhibitors on the behavior of colorectal cancer cells in three-dimensional tissue culture. Their findings show that B-Raf inhibitors cause the cancer cells to differentiate into cells that are characterized by more mature features and specialized to fulfil a specific function. Importantly, more differentiated cells often display a less aggressive behavior. 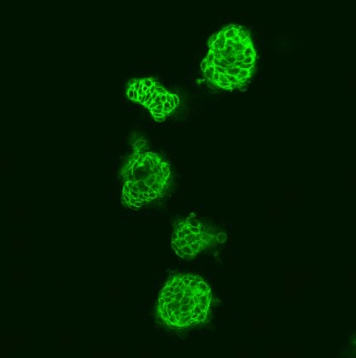 Hence, combination strategies, which are currently in clinical trials and involve B-Raf inhibitors, might be able to prevent the cancer from spreading to other parts of the body.

Usually, B-Raf is regulated by the signaling network in our cells. This tight control ensures that B-Raf is only activated under particular circumstances. Mutations in the BRAF gene lead to the production of a mutant protein that is no longer controlled and always active. A cell that has acquired such a mutation is switched into the cell division mode, multiplies constantly and has initiated a sequence of events ultimately leading to cancer.

There are several drugs that predominantly inhibit the mutant B-Raf. They specifically target the cell division mode in the tumor cells, while largely sparing healthy cells. These drugs have become a standard therapy for BRAF mutant metastatic melanoma, a kind of skin cancer. However, very little was known about how these drugs act on other types of cancer such as BRAF mutant colorectal cancer for which only very limited therapeutic options are available.

To gain more insight on this, Brummer, Herr and their team used a three-dimensional tissue culture. This experimental system recapitulates many biological processes more reliably than conventional in vitro methods. As expected, the cell division rate of these cells was strongly reduced by B-Raf inhibitors. Importantly, the researchers identified a novel aspect of B-Raf inhibitors by showing that they not only reduce the division rate of cancer cells, but also induce their differentiation into cells with more mature features.

When the mutant B-Raf was introduced into colorectal cancer cells lacking the BRAF mutation, a more undifferentiated cell type was observed. This points to an aggressive tumor, which is often undifferentiated and has a greater risk to metastasize. Initial experiments in cell culture showed that B-Raf inhibitors reduce the migratory and invasive behavior of cancer cells, two important prerequisites for metastasis. Brummer’s team attributes this less aggressive behavior to the observation that drug treated colorectal cancer cells increasingly produce cell-cell adhesion molecules.

These molecules are located at the cell surface and glue neighboring cells together, thereby preventing cancer cells from breaking away from the primary tumor and to initiate metastasis.

First small clinical trials in colorectal cancer patients suggested that B-Raf inhibitors as single agents might not be as effective in blocking cell division in this disease as it is observed in melanoma. Nevertheless, the findings suggest that a combination of B-Raf inhibitors with other therapeutics might be more potent. This concept will be further pursued by follow-up studies.