News Staff
The Permian was a geologic period that ended more than 250 million years ago. The Earth consisted of one forested super-continent called Pangea and a large ocean called Panthalassa teemed with life.

It wasn't going to last, we know the largest mass extinction ever recorded was om the horizon. Why did it happen? The favorite hypothesis is that a series of massive volcanic eruptions deposited rocks now known as the Siberian Traps, released gases causing planet-wide acid rain showers that damaged the biosphere.

But there was no fossil evidence of this acid rain - until now. Rock samples from the Dolomite Mountains in Italy contain evidence of an organic compound called vanillin, which confirms that the planet at the time of the end Permian extinction underwent successive acid rain showers. The new evidence suggests that the soils on land were very acidic, killing the ecosystem and the animals that depended on it. 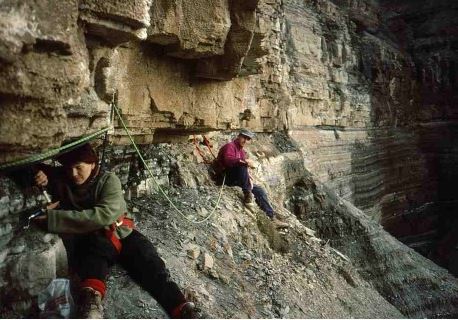 Perched on the side of the Dolomites in Italy. Credit: Imperial College London

Professor Mark Sephton, co-author of the paper from the Department of Earth Science and Engineering at Imperial College London, said, “The end of the Permian was a major catastrophe for Earth, which saw nearly all plant and marine life obliterated. Acid rain destroyed the delicate ecosystem on land, making the soils as acidic as lemon juice or vinegar, which killed off nearly everything.”

The rock samples the team analyzed were taken from the Dolomite Mountains, but originally formed from marine sediments off the coast of Pangea. These marine sediments contained remains of plant matter in soil that was washed into the ocean at the time of the Permian extinction, compacting together to form the rocks.

The team analyzed the ratio of vanillin to vanillic acid in the rock samples. Vanillin is an organic compound found in plants and a constituent component of vanilla. Following the death of plants, vanillin normally oxidizes to vanillic acid. However, this oxidation process is very slow when conditions are too acidic. The team found mostly vanillin preserved in successive layers in the rock samples, suggesting very acidic conditions in the soil. The team think that acid rain may have been the cause of this acidity.

The next step will see the researchers carrying out similar studies on rocks from around the world to determine in more detail the global extent of acidity in the environment at the end of the Permian period.
News Articles
More Articles All Articles
About