In some cases, seniors begin to show memory decline and cloudy judgment and researchers have correlated that to lost and altered connections between neurons in the brain.

A new study finds that riluzole, currently on the market as a treatment for Lou Gehrig's Disease (Amyotrophic lateral sclerosis - ALS) may help prevent these changes. The team found they could stop normal, age-related memory loss in rats by treating them with riluzole. This treatment, they found, prompted changes known to improve connections, and as a result, communication, between certain neurons within the brain's hippocampus.

"By examining the neurological changes that occurred after riluzole treatment, we discovered one way in which the brain's ability to reorganize itself -- its neuroplasticity -- can be marshaled to protect it against some of the deterioration that can accompany old age, at least in rodents," says co-senior study author Alfred E. Mirsky Professor Bruce McEwen, head of the Harold and Margaret Milliken Hatch Laboratory of Neuroendocrinology. The research was published online December 15 in the Proceedings of the National Academy of Sciences. 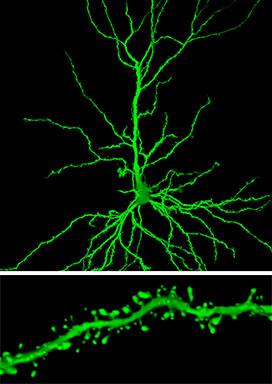 When researchers looked at certain neurons (similar to the one shown on top) in rats treated with riluzole, they found an important change in one brain region, the hippocampus: more clusters of so-called spines, receiving connections that extend from the branches of a neuron (bottom).
Credit Dr. John H. Morrison's lab, The Icahn School of Medicine at Mount Sinai

Neurons connect to one another to form circuits connecting certain parts of the brain, and they communicate using a chemical signal known as glutamate. But too much glutamate can cause damage; excess can spill out and excite connecting neurons in the wrong spot. In the case of age-related cognitive decline, this process damages neurons at the points where they connect -- their synapses. In neurodegenerative disorders, such as Alzheimer's disease, this contributes to the death of neurons.

Used to slow the progress of another neurodegenerative condition, ALS (also known as Lou Gehrig's disease), riluzole was an obvious choice as a potential treatment, because it works by helping to control glutamate release and uptake, preventing harmful spillover. The researchers began giving riluzole to rats once they reached 10 months old, the rat equivalent of middle age, when their cognitive decline typically begins.

After 17 weeks of treatment, the researchers tested the rats' spatial memory -- the type of memory most readily studied in animals -- and found they performed better than their untreated peers, and almost as well as young rats. For instance, when placed in a maze they had already explored, the treated rats recognized an unfamiliar arm as such and spent more time investigating it.

When the researchers looked inside the brains of riluzole-treated rats, they found telling changes to the vulnerable glutamate sensing circuitry within the hippocampus, a brain region implicated in memory and emotion.

"We have found that in many cases, aging involves synaptic changes that decrease synaptic strength, the plasticity of synapses, or both," said John Morrison, professor of neuroscience and the Friedman Brain Institute and dean of basic sciences and the Graduate School of Biomedical Sciences at Mount Sinai. "The fact that riluzole increased the clustering of only the thin, most plastic spines, suggests that its enhancement of memory results from both an increase in synaptic strength and synaptic plasticity, which might explain its therapeutic effectiveness."

In this case, the clusters involved thin spines, a rapidly adaptable type of spine. The riluzole-treated animals had more clustering than the young animals and their untreated peers, who had the least. This discovery led the researchers to speculate that, in general, the aged brain may compensate by increasing clustering. Riluzole appears to enhance this mechanism.

"In our study, this phenomenon of clustering proved to be the core underlying mechanism that prevented age-related cognitive decline. By compensating the deleterious changes in glutamate levels with aging and Alzheimer's disease and promoting important neuroplastic changes in the brain, such as clustering of spines, riluzole may prevent cognitive decline," says first author Ana Pereira, an instructor in clinical investigation in McEwen's laboratory.

Taking advantage of the overlap of neural circuits vulnerable to age-related cognitive decline and Alzheimer's disease, Pereira is currently conducting a clinical trial to test the effectiveness of riluzole for patients with mild Alzheimer's.