The next time you get really mad, take a look in the mirror. See that lowered brow, the thinned lips and the flared nostrils? That's what social scientists call the "anger face," and they believe it is part of our basic biology as humans.

Almost everything in biology has a function, according to evolutionary psychologists, and so they match all kinds of behavior to those; from voting to messy offices, someone claims it is genetic predisposition based on personalities of the past.  The anger expression employs seven distinct muscle groups that contract in a highly stereotyped manner, so the authors in Evolution and Human Behavior speculate on why evolution chose those particular muscle contractions to signal the emotional state of anger.

They believe that have identified the functional advantages that caused the specific appearance of the anger face to evolve. 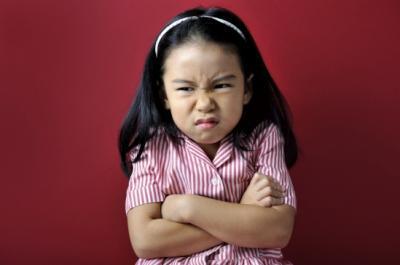 "The expression is cross-culturally universal, and even congenitally blind children make this same face without ever having seen one," said lead author Aaron Sell, a lecturer at the School of Criminology at Griffith University in Australia and former postdoctoral scholar at UC Santa Barbara's Center for Evolutionary Psychology.

The current research is part of a larger set of studies that examine the evolutionary function of anger. "Our earlier research showed that anger evolved to motivate effective bargaining behavior during conflicts of interest," said Sell.

The greater the harm an individual can inflict, noted Leda Cosmides, the more bargaining power he or she wields. Cosmides, professor of psychology at UCSB, is a co-author on the study along with John Tooby, UCSB professor of anthropology. Cosmides and Tooby are co-directors of the campus's Center for Evolutionary Psychology.

"This general bargaining-through-menace principle applies to humans as well," said Tooby. "In earlier work we were able to confirm the predictions that stronger men anger more easily, fight more often, feel entitled to more unequal treatment, resolve conflicts more in their own favor and are even more in favor of military solutions than are physically weak men."

Starting from the hypothesis that anger is a bargaining emotion, the researchers reasoned that the first step is communicating to the other party that the anger-triggering event is not acceptable, and the conflict will not end until an implicit agreement is reached. This, they say, is why the emotion of anger has a facial expression associated with it. "But the anger face not only signals the onset of a conflict," said Sell. "Any distinctive facial display could do that. We hypothesized that the anger face evolved its specific form because it delivers something more for the expresser: Each element is designed to help intimidate others by making the angry individual appear more capable of delivering harm if not appeased."

For our ancestors, Cosmides noted, greater upper body strength led to a greater ability to inflict harm; so the hypothesis was that the anger face should make a person appear stronger.

Using computer-generated faces, the researchers demonstrated that each of the individual components of the anger face made those computer-generated people appear physically stronger. For example, the most common feature of the anger face is the lowered brow. Researchers took a computerized image of an average human face and then digitally morphed it in two ways: One photo showed a lowered brow, and the other a raised brow. "With just this one difference, neither face appeared 'angry,' " said Sell. "But when these two faces were shown to subjects, they reported the lowered brow face as looking like it belonged to a physically stronger man."

The experiment was repeated one-by-one with each of the other major components of the classic anger face — raised cheekbones (as in a snarl), lips thinned and pushed out, the mouth raised (as in defiance), the nose flared and the chin pushed out and up. As predicted, the presence by itself of any one of these muscle contractions led observers to judge that the person making the face was physically stronger.

"Our previous research showed that humans are exceptionally good at assessing fighting ability just by looking at someone's face," said Sell. "Since people who are judged to be stronger tend to get their way more often, other things being equal, the researchers concluded that the explanation for evolution of the form of the human anger face is surprisingly simple — it is a threat display."

These threat displays — like those of other animals — consist of exaggerations of cues of fighting ability, Sell continued. "So a man will puff up his chest, stand tall and morph his face to make himself appear stronger.

"The function of the anger face is intimidation," added Cosmides, "just like a frog will puff itself up or a baboon will display its canines."

As Tooby explained, "This makes sense of why evolution selected this particular facial display to co-occur with the onset of anger. Anger is triggered by the refusal to accept the situation, and the face immediately organizes itself to advertise to the other party the costs of not making the situation more acceptable. What is most pleasing about these results is that no feature of the anger face appears to be arbitrary; they all deliver the same message."

According to Sell, the researchers know this to be true because each of the seven components has the same effect. "In the final analysis, you can think of the anger face as a constellation of features, each of which makes you appear physically more formidable."