News Staff
Arctic sea ice extent plunged 2001 to 2007 but then rebounded between 2007 and 2013. Warming world or not, periods of no change - and rapid change - at the world's northern reaches are the new normal. And perhaps the old normal as well.

Natural ups and downs of temperature, wind and other factors mean that even as sea ice slowly melts, random weather can mask or enhance the long-term trend. For example, even in a warming world, there's still a one-in-three chance that any seven-year period would see no sea ice loss, such as in 2007-2013, a new analysis shows. And the chaotic nature of weather can also occasionally produce sea ice loss as rapid as that seen in 2001-2007, even though the long-term trend is slower.

Neither time period should be used to forecast the long-term future of the region, according to Jennifer Kay, a fellow of the Cooperative Institute for Research in Environmental Sciences at the University of Colorado Boulder and co-author of a new analysis out today in Nature Climate Change.

Some commentators tracking sea ice trends have used the recent "pause" in sea ice loss to claim that human-caused climate warming is not occurring; others previously used the rapid decline from 2001-2007 to speculate about ice-free Arctic summers by 2015. Neither claim is warranted, the authors report. 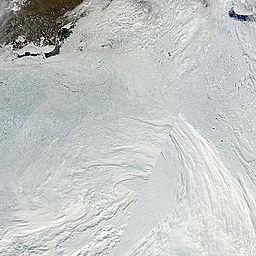 Arctic sea ice extent plunged is erratic and we should get used to it. Credit: NASA

"To understand how climate change is affecting the Arctic, you cannot cherry pick short stretches of time," Kay said. "Seven years is too short."

The research team, led by Neil Swart of Environment Canada, analyzed both long-term records of Arctic sea ice observations and an extensive dataset of results from global climate models. From the model runs, they could calculate the chances that certain types of scenarios could play out in a slowly warming Arctic: For example, just how likely is it that sea ice would not decline during a seven-year stretch?

The team focused on September measurements of sea ice, which is when the extent reaches a yearly minimum. By early October, Arctic sea ice generally begins growing again, a seasonal response to colder temperatures and shorter days.

The researchers determined that a seven-year period is too short to accurately capture long-term sea ice trends in the region. Even given long-term melting, there's a 34-percent chance of randomly getting an unusual period of no change or even growth in sea ice, and a 5-percent chance of a period of very rapid loss, similar to the decline in 2001-2007.

The team also increased the time period of analysis, to see if longer spans of time would be long enough. In about 5 percent of model simulations, there were even 20-year time periods with no loss of sea ice, despite strong human-caused warming.

"It is quite conceivable that the current period of near zero sea-ice trend could extend for a decade or more, solely due to weather-induced natural variability hiding the long-term human caused decline," said Ed Hawkins, a co-author and researcher at the National Centre for Atmospheric Science, University of Reading.

"Human caused climate warming has driven a decline in Arctic September sea-ice extent over the past few decades," the new paper reports, and "this decline will continue into the future." But understanding how and why natural variability affects sea ice trends should help scientists better predict how sea ice will evolve in upcoming years and decades, with implications for natural ecosystems, shipping routes, energy development and more.