News Staff
Thousands of years ago, Aristotle knew that some mushrooms glowed, so it is no surprise the great thinker wondered why.

Science may finally have an answer for his question.

A new study posits that the light emitted from those fungi attracts the attention of insects, including beetles, flies, wasps, and ants. Those insect visitors are apparently good for the fungi because they spread the fungal spores around. The new study also shows that the mushrooms' bioluminescence is under the control of the circadian clock. In fact, it was that discovery that led the researchers to suspect that the mushrooms' light must serve some useful purpose. 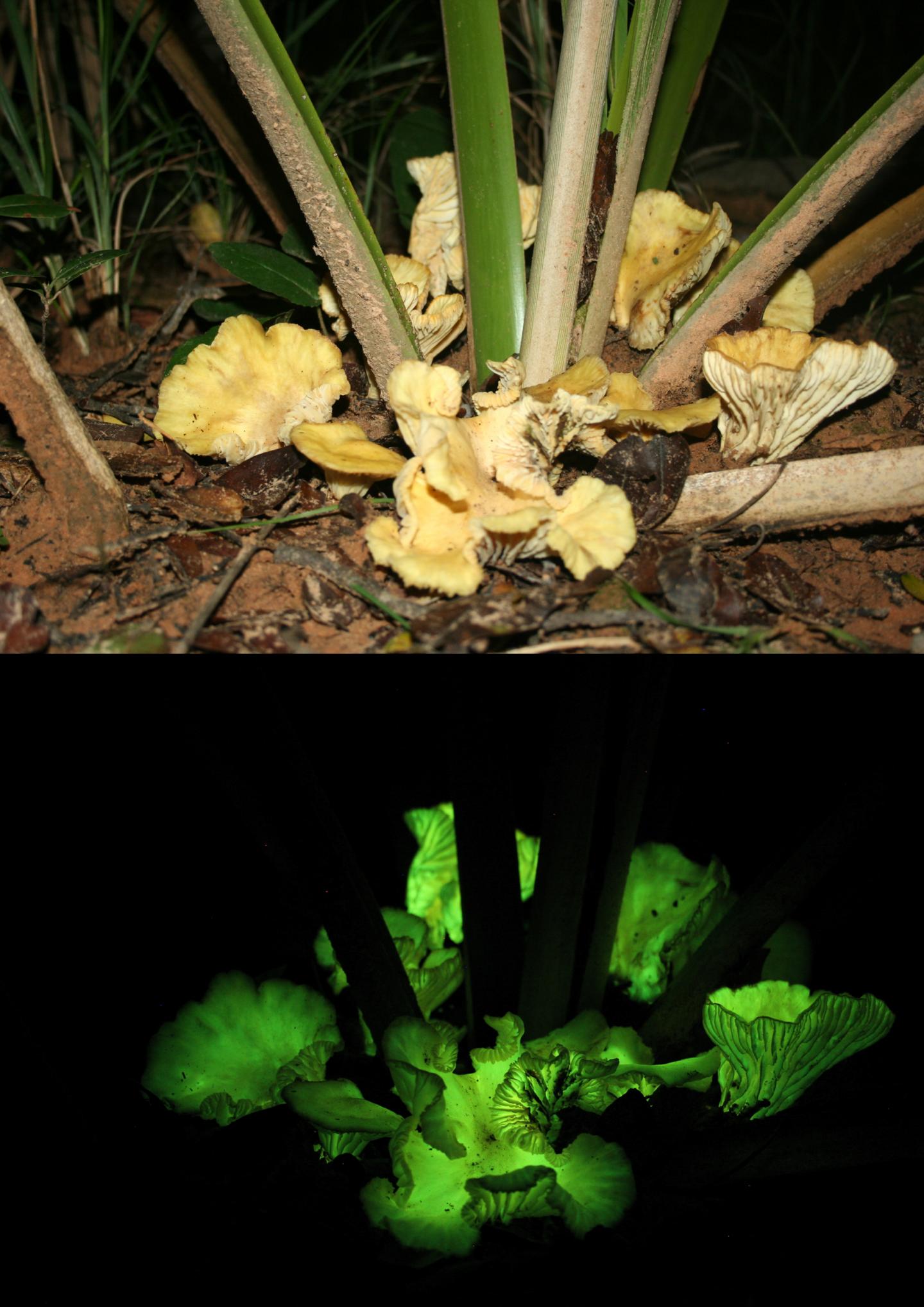 N. gardneri mushrooms growing on the base of a young babassu palm in Gilbués, PI, Brazil. Credit: Michele P. Verderane/IP-USP-2008

"It appears that fungi make light so they are noticed by insects who can help the fungus colonize new habitats," says Cassius Stevani of Brazil's Instituto de Química-Universidade de São Paulo. The circadian control of bioluminescence makes the process more efficient.

There are many examples of living things that generate light in various ways. Among bioluminescent organisms, fungi are the most rare and least well understood. Only 71 of more than 100,000 described fungal species produce green light in a biochemical process that requires oxygen and energy. Researchers had believed in most cases that fungi produce light around the clock, suggesting that perhaps it was a simple, if expensive, metabolic byproduct.

The new work led by Dunlap and Stevani suggests that just isn't so, at least not in the case of Neonothopanus gardneri, one of the biggest and brightest of bioluminescent mushrooms. N. gardneri is also called "flor de coco," meaning coconut flower, by locals in Brazil, where the mushroom can be found attached to leaves at the base of young palm trees in coconut forests.

The researchers found that the mushrooms' glow is under the control of a temperature-compensated circadian clock. They suggest that this level of control probably helps the mushrooms save energy by turning on the light only when it's easy to see.

To find out what that green glow might do for the mushrooms, the researchers made sticky, fake mushrooms out of acrylic resin and lit some from the inside with green LED lights. When those pretend fungi were placed in the forest where the real bioluminescent mushrooms are found, the ones that were lit led many more staphilinid rove beetles, as well as flies, wasps, ants, and "true bugs," to get stuck than did sticky dark mushrooms.

Dunlap says they are interested in identifying the genes responsible for the mushrooms' bioluminescence and exploring their interaction with the circadian clock that controls them. They are also using infrared cameras to watch the interaction between N. gardneri mushrooms and arthropods, especially larger ones, more closely.

The findings are not only cool, they are also important in understanding how mushrooms are dispersed in the environment, the researchers say. That's key because mushrooms such as N. gardneri play an important role in the forest ecosystem.

"Without them, cellulose would be stuck in its form, which would impact the whole carbon cycle on Earth," Stevani says. "I dare to say that life on Earth depends on organisms like these."

Some fungi in the group known as basidiomycetes, including two bioluminescent mushrooms, are also parasites of coffee and pine trees. As a result, Stevani says, "it is very important to know how basidiomycetes grow and consequently how they spread their spores."