The fungal disease known as white-nose syndrome has spread to bat colonies throughout eastern North America over the past few years, causing bat populations to crash and leading to various claims about what to blame for it.

But there is no magic bullet, finds a new study, because it is related to seasonal dynamics of infection and transmission too.

Writing in Proceedings of the Royal Society B, the researchers note that during the winter, when the bats are hibernating, the fungus can infect nearly every bat in a colony. Bats that survive the winter are able to clear the infection during summer when their body temperatures are above the growth limit of the fungus.

The remarkably high rate of infection during hibernation leads to high mortality rates at the time of year when bat populations are naturally at their lowest, before the females give birth in the summer. 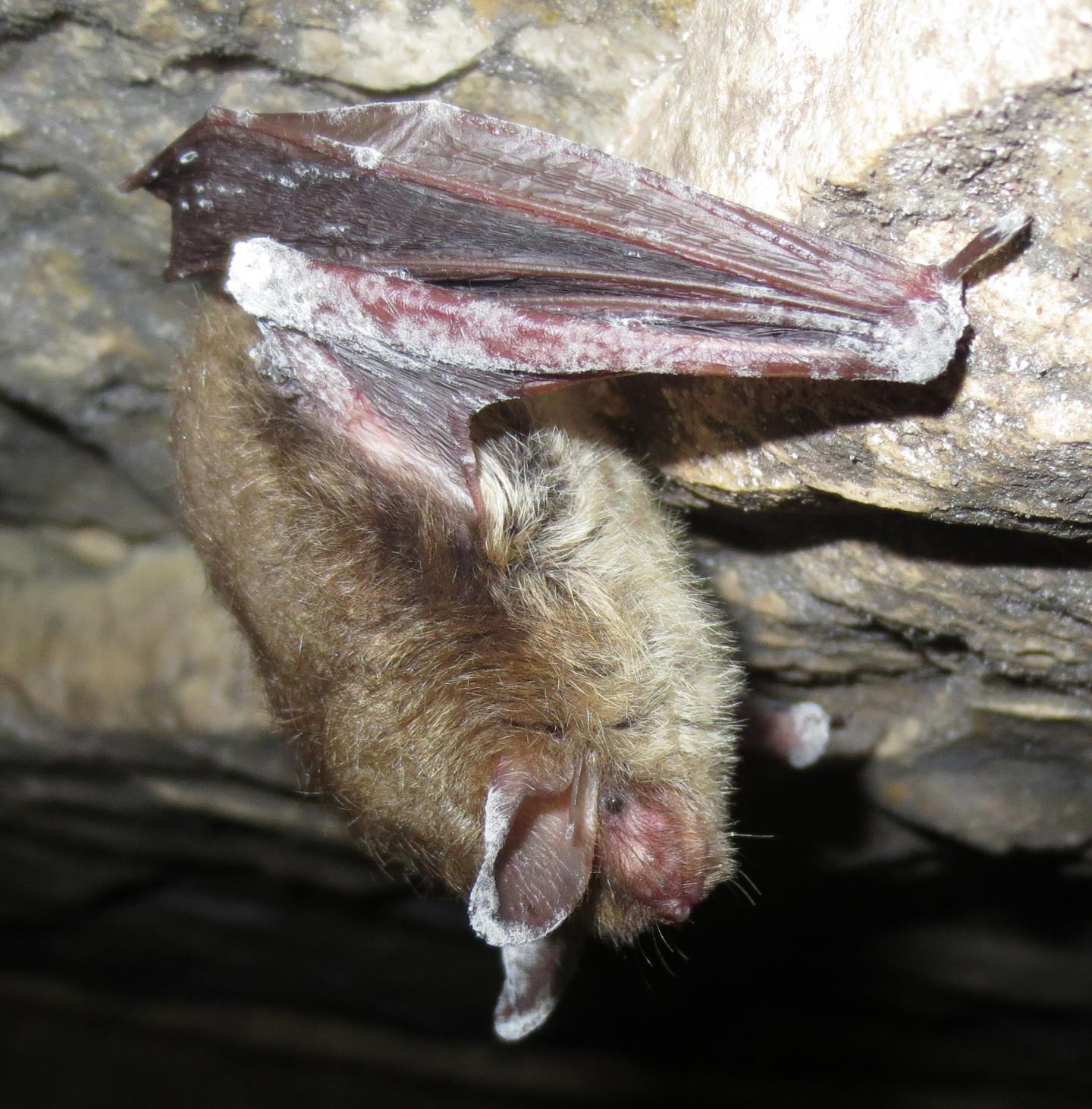 "It hits when the population is at its smallest, and by the end of winter nearly 100 percent of the bats in a cave can be infected, which helps explain why it has such large impacts," said Kate Langwig, a graduate student at UC Santa Cruz and first author of the paper.

The study provides the first description of the dynamics of fungal infection and transmission in bats, and the findings are in striking contrast to most infectious diseases, said senior author Marm Kilpatrick, associate professor of ecology and evolutionary biology at UC Santa Cruz. "For many diseases, population density and social interactions play a big role in transmission, but these bats are actually very social and live in dense colonies in both summer and winter," he said. "In this case, transmission is tied to hibernation and body temperature. When the bats start hibernating, it's almost like they become petri dishes for this fungus to grow on."

The fungus (Pseudogymnoascus destructans) thrives in cold environments and grows superficially on exposed skin on the bats' noses, ears, and wings. During hibernation, the body temperatures of bats drop to the cold ambient temperatures of their "hibernacula" (the caves and abandoned mines where the bats hibernate). The fungus proliferates at these temperatures, which range from 2 to 12 degrees Celsius (35 to 54 degrees Fahrenheit).

Over the course of the winter hibernation period, which can last more than five months, the infection spreads throughout the colony and on individual bats. Most of the mortality is in late winter, when both infection prevalence (the number of infected bats) and infection loads (the amount of fungus on individual bats) are highest.

"The peak load in late winter is probably what's driving mortality," Langwig said. "Bats that survive the winter can clear the fungal infection once they warm up, so that by mid-summer, when the young of the year are born, almost no bats are infected any more."

The researchers studied six species of bats, testing them for infection with the fungus during three key periods of their annual cycle: fall, when the bats mate outside the hibernacula; winter, when they go into hibernation; and summer, when they migrate to maternity sites and the females give birth.

The researchers began to detect low levels of fungal infection in the fall, probably as a result of bats coming in contact with spores of the fungus inside the hibernacula. "The bats are still active then, so the infections are at a very low level and don't appear to be growing. But as soon as they go into hibernation and their body temperature drops, the infections ramp up really quickly," Langwig said.

The fact that bats are not transmitting the infection during the migratory period is important in limiting the rate at which it is spreading geographically, she added, noting that West Nile virus--which, like white-nose syndrome, was first detected in New York state--spread rapidly throughout most of North America because birds are infected during migration.

The study provides valuable information for planning strategies to manage white-nose syndrome. If scientists can develop an effective treatment, for example, this study indicates that the best time to apply it would probably be early winter, Langwig said. Kilpatrick and coauthor Winifred Frick, an adjunct professor of biology at UC Santa Cruz, are leading efforts to develop a "probiotic" treatment using bacteria to suppress the growth of the fungus. The researchers have isolated several bacterial species that occur naturally on bats and are measuring their ability to suppress the fungus in laboratory tests. Then they plan to use the most promising bacteria as a treatment to see if it can help bats survive through the winter.

"The idea would be to apply the bacteria on bats during hibernation and see if it suppresses the growth of the fungus," Kilpatrick said.