News Staff
New research shows bacteria can use tiny magnetic particles to effectively create a 'natural battery.' The bacteria can load electrons onto and discharge electrons from microscopic particles of magnetite. This discovery holds out the potential of using this mechanism to help clean up environmental pollution, and other bioengineering applications.

Researchers from the University of Tübingen, the University of Manchester, and Pacific Northwest National Laboratory, USA, incubated the soil and water dwelling purple bacteria Rhodopseudomonas palustris with magnetite and controlled the amount of light the cultures were exposed to.

Using magnetic, chemical and mineralogical analytical methods, the team showed that in light conditions which replicated the day-time, phototrophic iron-oxidizing bacteria removed electrons from the magnetite, thereby discharging it. During the night-time conditions, the iron-reducing bacteria took over and were able to dump electrons back onto the magnetite and recharge it for the following cycle. 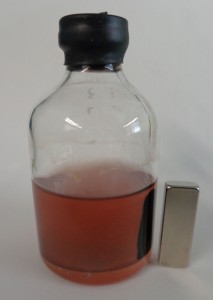 Credit: Bottle used in the experiment, with the pink color due to the Fe(II)-oxidizer Rhodopseudomonas palustris and the magnetite clincing to the side of the bottle near to a magnet. Photo credit: James Byrne. Source: The European Association of Geochemistry

This oxidation/reduction mechanism was repeated over several cycles, meaning that the battery was used over repeated day-night cycles. Whilst this work has been on iron-metabolizing bacteria, it is thought that in the environment the potential for magnetite to act as a battery could extend to many other types of bacteria which do normally not require iron to grow, e.g. fermenters.

According to study leader Dr James Byrne (Tübingen), "The geochemistry is interesting in itself, but there are also potentially useful implications which may derive form this work. The flow of electrons is critical to the existence of all life and the fact that magnetite can be considered to be redox active opens up the possibility of bacteria being able to exist or survive in environments where other redox active compounds are in short supply in comparison to magnetite. In our study we only looked at iron metabolizing bacteria, but we speculate that it might be possible for other non-iron metabolizing organisms to use magnetite as a battery as well - or if they can be made to use it, through genetic engineering. But this is something that we do not know yet"

Co-author, Andreas Kappler (Tübingen), said, "This may have some interesting geochemical applications. There has been considerable recent work on using magnetite to clean up toxic metals. For example, magnetite can reduce the toxic form of chromium, chromium VI, to the less toxic chromium (III), which can then be incorporated into a magnetite crystal. The fact that this magnetite may then be exposed to these reducing bacteria could potentially enhance its remediation capacity. But we are still at an early stage of understanding the bioengineering implications of this discovery."