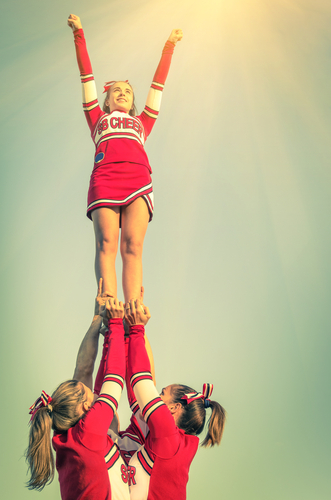 Despite popular perceptions that cheerleading is dangerous, it is relatively safe - but it's not perfect and when injuries do happen they tend to be severe.

A new movie is out this month on NFL concussions, and the doctor who is the subject of the piece says football for anyone under age 18 should be banned - but an upcoming white paper from the American Council on Science and Health notes that a ban may be too heavy-handed. Cheerleading also has a lot of head injuries and concussions are not the top injury in youth football.

For generations, cheerleading was a sideline activity, rather than a sport. Yet as its popularity has grown with more than 400,000 students participating, cheerleader routines have become increasingly complex leading many to believe that it's extremely dangerous. The authors say one way to make the activity safer is to have states classify cheerleading as a sport. Currently, it is up to each state high school athletic association to determine whether cheerleading is a sport or a club activity.

So where does cheerleading rank in injuries? It comes in 18th out of the 22 sports they looked at (not all states consider it a sport, however) in terms of overall injury rate - but when injuries do happen, they can be pretty severe. A study claims to be the first to examine the injury epidemiology of high school cheerleading compared to other sports and was published today in the journal Pediatrics.

The data was collected from the National High School Sports-Related Injury Surveillance System, High School RIO (Reporting Information Online). According to researchers, a total of 752 female cheerleader injuries occurred in 1,090,705 `athletic exposures,' or one athlete participating in one practice, competition or performance. Most happened during practice.

"Cheerleading's overall injury rate was significantly lower than that of all other sports combined and all other girls sports combined," the study said, relying on information gathered from an average 107 high schools over 5 years.

The most common injuries were concussions at 31.1 percent, ligament sprains at 20.2 percent, muscle strains at 14.2 percent and fractures at 10.3 percent. Surgery was required for 4 percent of the injuries, mostly for fractures and sprains.

The majority of injuries occurred during stunts, often during dismounts.

When injuries did occur, they were often serious. Currie found that cheerleading had the second highest proportion of injuries resulting in time loss of at least three weeks of all 22 sports studied.