The exchange of chemical signals between organisms is considered the oldest form of communication.

Scientists have now identified such a signal molecule in the urine of male Mozambique tilapia (Oreochromis mossambicus): this pheromone boosts hormone production and accelerates oocyte maturation in reproductive females. Hence, the Mozambique tilapia is one of the first fish species in which the chemical structure of a pheromone has been identified and the biological basis of its activity elucidated. 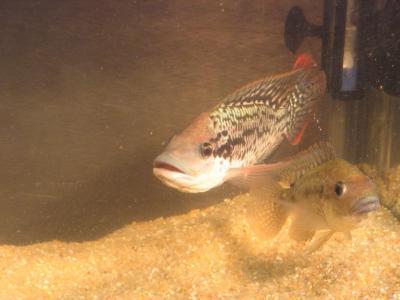 The social behavior of Mozambique tilapias (Oreochromis mossambicus) native to southern Africa is very complex. The strict hierarchic ranking among males is fought out in so-called courtship arenas. With their mouths, male tilapias make excavations in the sand in the middle of an arena with the aim of attracting females to spawn in these nests. At the same time, they act aggressively to keep other males away.

Dominant males have been observed to urinate more often and squirt larger quantities of urine in the water during fights compared to their subordinate rivals. The urine contains pheromones that reduce aggressive behavior in other males. The compounds also lure females to the nest and modify their hormonal status by accelerating oocyte maturation. Thus the pheromones help to synchronize female spawning and external fertilization by the males and so to increase the odds of reproductive success.

Tilapias also show this behavior in captivity, which makes them an ideal model system for reproducible biological assays. Tina Keller-Costa and her colleagues at the Marine Science Center at the University of the Algarve in Faro, Portugal, as well as the Biosynthesis/NMR Research Group at the Max Planck Institute for Chemical Ecology in Jena, Germany, have now identified the chemical structure of the signaling molecules in tilapia males and studied their function. She collected urine samples from dominant males and purified the samples in several steps, testing them for biological activity as pheromones after each step. Rival male Mozambique tilapias (Oreochromis mossambicus) in an aquarium: The dominant male (right) defends the nest, an excavation in the sand he made with his mouth. Females are mouthbrooders, meaning they take up the eggs in their mouths, once they have been externally fertilized in the nest by the males. Oral incubation is a strategy for protecting offspring. Credit: Olinda G. Almeida / Peter C. Hubbard, Centre of Marine Sciences (CCMAR), University of the Algarve, Faro, Portugal

Two steroids as main components in the urine

This procedure resulted in two pure substances whose chemical structures were elucidated using nuclear magnetic resonance spectroscopy (NMR). Their identity was confirmed by chemical synthesis: "The two structures are stereoisomers or mirror images of a pregnane-type steroid linked to glucuronic acid," Bernd Schneider, the head of the NMR lab in Jena, said, summarizing the results of the analysis.

Both males and females showed highly sensitive responses to the odor of these two steroids. Although the two pheromone components stimulate the hormonal system of the females and trigger spawning, they are not by themselves capable of reducing aggressive behavior in rival males. The researchers thus assume that the urine of dominant males must contain additional yet-to-be identified substances that contribute to this effect in a complex mixture.

Until now only very few fish pheromones have been chemically identified. "Our discovery will allow for further investigations, for example, of the mechanisms of perception and processing of these chemical signals by the brain in order to originate a response, in this case oocyte maturation and behavioral changes," says Tina Keller-Costa, who conducted the experiments for her PhD thesis.

Apart from the carp family, tilapias belong to the most important edible fish raised commercially. However, their aquaculture in many tropical and subtropical waters has led to an uncontrolled population growth and spread of the species.

The use of pheromones could help optimize the aquaculture of tilapia species by increasing female fertility and reducing aggression between competing males. Pheromones could also help to control the invasive behavior of these fish, which threatens the ecological balance of many ecosystems.