It's a common enough tale, told throughout the history of literature. A parent prefers their 'real' children and the life of the step-child is miserable as a result, compared to the biological child.

That "Cinderella effect" claims that it is biologically inevitable that parents care less for stepchildren because they do not spread their genes - as you might expect, actual biologists did not come up with it, anthropologists did. And the authors of a new paper recognize something you knew all along; in many cases, the value and personality of a step-child matters more than biological inheritance, just like with biological children.

A pair of scholars sought to analyze if and how strongly parents neglected their stepchildren by looking at the mortality of children in historic patchwork families from the 17th to 19th century. They compared the Krummhörn region of East Frisia (Germany), which was a densely populated area with little space for demographic development, and the growing Canadian settlements in Québec. For both areas they calculated how the children's chances of survival changed when a stepmother moved in.

They looked at the records of thousands of children up to age 15 in East Frisia and Québec. By reconstructing whether and when a parent died, a stepmother or stepfather moved in, and whether half-siblings were born during this period, they did some correlation-causation to infer the influence of all those events on the survival rate of boys and girls. Dates of births, christenings, weddings and funerals were taken from databases built from old church registers. For the Krummhörn region in East Frisia the researchers looked at the birth cohorts from 1720 to 1859, and for Québec at those born from marriages that took place from 1670 to 1750.

They conclude that only in Krummhörn, which offered fewer opportunities for demographic growth, did stepmothers have more a negative influence. In Krummhörn children from a father's first marriage died more often before the age of 15 if a stepmother moved in. This effect was not seen in Québec. The "Cinderella effect," they determine, is not not inevitable - which you all knew. Instead, individual stepmothers have all treated step-children individually and even as a group they believe the step-parents must have treated their children in East Frisia and Canada completely differently. 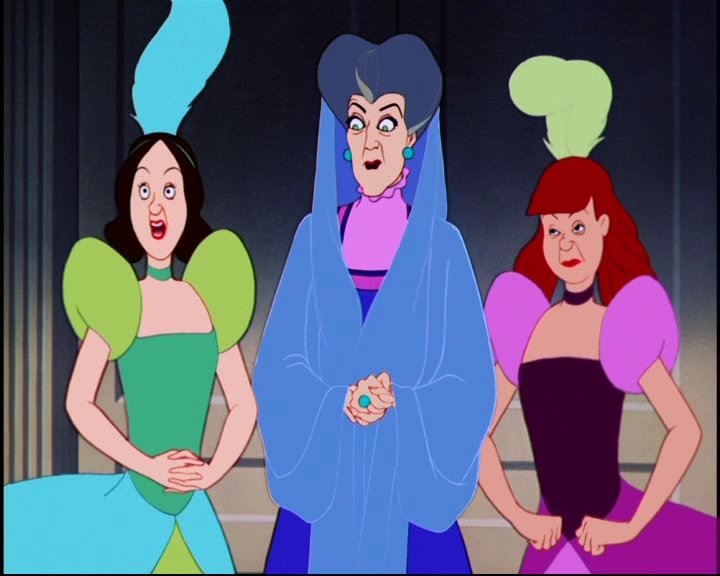 Anthropologists say that Lady Tremaine was a victim of her own biology and that is why she treated Cinderella so poorly and her awful children were okay. In 1950 Disney knew what anthropologists did not learn until 2013 - that the plot made no sense unless the biological father was dead and if the other family was truly evil. Credit: Walt Disney Company. Link: Fanpop

That's the only reason children died in olden days, at the hands of stepmothers, right?

Or not. Still, they declare the differences they found striking: if a Krummhörn girl lost her mother early, the likelihood of her dying before the age of 15 more than doubled compared to a girl whose mother did not die. If the father remarried and the stepmother joined the family, mortality doubled again. Thus, the arrival of a stepmother affected the girls in East Frisia as much as the death of their own mother. In Québec, however, the risk of dying young barely changed when the new mother moved in.

The authors invoke a lot of other stuff about 'competitors', as if people are bacteria, but a dense area has lots of risk, like disease and other dangers, along with limited opportunities for poor people, whereas an open area has greater equality for food and wealth. That is why poor people moved to North America. Anthropologists could claim that Irish potato famine deaths were harder on step-children but that ignores the fact that the children do share inheritance with one parent.

Care for children is strategy?

So Krummhörn, where siblings competed for basic needs, was abusive, they say. "We assume that stepmothers neglected, exploited or even abused the children from their husband's first marriage," says Max Planck Institute for Demographic Research researcher Kai Willführ. "The difference is due to the scarcity of resources. It wouldn't be going too far to say that we could talk about a difference between the New World and the Old, between Europe and North America," fellow demographer Alain Gagnon of the University of Montreal said.

Although the scholars used historical data, they maintain that their results have fundamentally challenged the veracity of the "Cinderella effect" - for at least the people in social sciences who ever believed in it. "It is therefore also true today, that stepparents are not always evil," says researcher Kai Willführ.