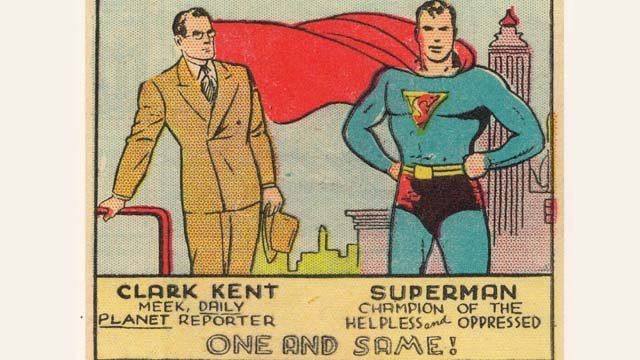 In comics, Clark Kent looks a lot like Superman, so similar every child has to wonder why no one puts it together. A pair of glasses on Kent, and a small lock of hair on Superman's forehead, are the only differences.

Yet that's probably enough, according to a new paper. Small alterations to
a person's appearance, such as wearing glasses, can significantly hinder positive facial identification.

The psychologists showed participants a number of faces in various 'natural' poses, similar to images seen on Facebook or other social media sites, and asked them to decide whether each pair of images showed the same person or not. Images were shown in three categories - pairs of faces that wore glasses, images where neither wore glasses, or only one image wore glasses.

Dr Robin Kramer, from the University of York's Department of Psychology, said, "The question of whether the inhabitants of Metropolis could be realistically deceived by Superman's simple disguise has been rumbling since the comic books first arrived on the stands, but the question becomes a serious one when applied to real-world security issues.

"When a security guard checks a passport photo against the person standing in front of them, they do not have the luxury of familiarity with that face, as Lois does with Superman/Clark Kent. This is something we wanted to investigate further, because we know from previous studies that people are relatively poor at matching faces in various guises when the person is unfamiliar to them.

"We also know from prior work that it is easier to match passport-style photos together when the facial expressions and poses are the same. Here, we investigated unfamiliar face matching, showing participants two unconstrained faces of strangers, with and without glasses, and asked whether the images are the same person or two different people."

The results suggest that people generally find it difficult to correctly match unfamiliar and uncontrolled face images, but they are significantly worse when glasses are worn by only one of the faces.

Co-author, Dr Kay Ritchie, from the University of York's Department of Psychology, added, "In real terms, glasses would not prevent Lois recognizing that Clark is in fact Superman as she is familiar with him. For those who do not know him, however, this task is much more difficult, and our results show that glasses do disrupt our ability to recognize the same unfamiliar person from photo-to-photo."