News Staff
Antibiotic resistance is poised to spread globally among bacteria frequently implicated in respiratory and urinary infection, according to new research.

A recent study shows that two genes that confer resistance against a particularly strong class of antibiotics can be shared easily among a family of bacteria responsible for a significant portion of hospital-associated infections. Drug-resistant germs in the same family of bacteria recently infected several patients at two Los Angeles hospitals. The infections have been linked to medical scopes believed to have been contaminated with bacteria that can resist carbapenems, potent antibiotics that are supposed to be used only in gravely ill patients or those infected by resistant bacteria.

The Centers for Disease Control and Prevention named carbapenem-resistant Enterobacteriaceae as one of the three most urgent threats among emerging forms of antibiotic-resistant disease. Studies have shown the fatality rate for these infections is above 50 percent in patients with weakened immune systems. 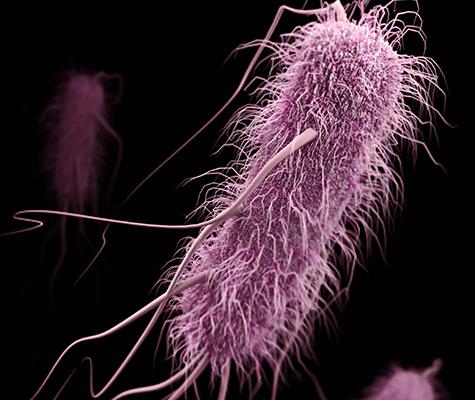 Bacteria that cause many hospital-associated infections are ready to quickly share genes that allow them to resist powerful antibiotics. Credit: CDC/James Archer

"Carbapenems are one of our last resorts for treating bacterial infections, what we use when nothing else works," said senior author Gautam Dantas, PhD, associate professor of pathology and immunology at Washington University School of Medicine in St. Louis. "Given what we know now, I don't think it's overstating the case to say that for certain types of infections, we may be looking at the start of the post-antibiotic era, a time when most of the antibiotics we rely on to treat bacterial infections are no longer effective."

Dantas and other experts recommend strictly limiting the usage of carbapenems to cases in which no other treatments can help.

Two genes are primarily responsible for carbapenem-resistant versions of these disease-causing bacteria. One gene, KPC, was detected in New York in 2001 and quickly spread around most of the world, with the exception of India, Pakistan and other South Asian countries. This gene was present in the bacteria that recently contaminated medical equipment in a Los Angeles hospital where two patients died.

A second carbapenem resistance gene, NDM-1, was identified in 2006 in New Delhi, India. It was soon detected throughout South Asia, and most patients infected by bacteria with NDM-1 have had an epidemiological link to South Asian countries.

The researchers also sequenced a special portion of bacterial genetic material called plasmids. Most of a bacteria's DNA is found in its chromosome, but bacteria also have many extra, smaller and circular bits of DNA known as plasmids that easily can pass from one bacterial strain to another. A plasmid is like a bacterial gene delivery truck; it is the primary way antibiotic resistance genes spread between bacteria.

The researchers identified a few key instances in which the plasmids carrying NDM-1 or KPC were nearly identical, meaning they easily could facilitate the spread of antibiotic resistance between disease-causing bacteria found in the United States and South Asia. Recent evidence suggests that this intermingling already may be happening in parts of China.

"Our findings also suggest it's going to get easier for strains of these bacteria that are not yet resistant to pick up a gene that lets them survive carbapenem treatment," Dantas said. "Typically, that's not going to be a problem for most of us, but as drug-resistant forms of Enterobacteriaceae become more widespread, the odds will increase that we'll pass one of these superbugs on to a friend with a weakened immune system who can really be hurt by them."