News Staff
Welcome to a new way to manipulate matter.

Mixing computers and water typically is usually a bad idea but bioengineers at Stanford have built a synchronous computer that operates using the physics of moving water droplets. They used droplet fluid dynamics to demonstrate a synchronous, universal droplet logic and control.

Because of its universal nature, the droplet computer can perform any operation that a conventional electronic computer can crunch, although still at significantly slower rates in this early stage.

Computer clocks are responsible for nearly every modern convenience. Smartphones, DVRs, airplanes, the Internet - nearly every computer program requires several simultaneous operations, each conducted in a perfect step-by-step manner. A clock makes sure that these operations start and stop at the same times, thus ensuring that the information synchronizes.

Developing a clock for a fluid-based computer required some creative thinking. It needed to be easy to manipulate, and also able to influence multiple droplets at a time. The system needed to be scalable so that in the future, a large number of droplets could communicate amongst each other without skipping a beat. The team decided realized that a rotating magnetic field might do the trick. 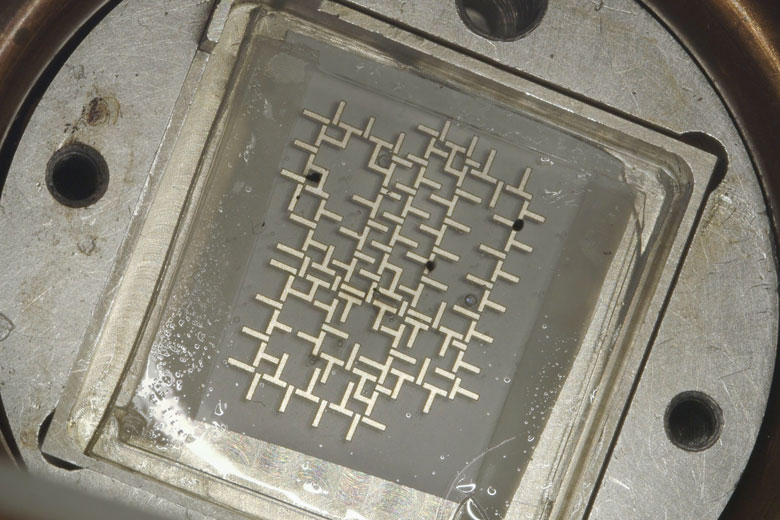 Stanford professor Manu Prakash built arrays of tiny iron bars on glass slides that look something like a Pac-Man maze. They laid a blank glass slide on top and sandwiched a layer of oil in between. Then they carefully injected into the mix individual water droplets that had been infused with tiny magnetic nanoparticles. Next, they turned on the magnetic field. Every time the field flips, the polarity of the bars reverses, drawing the magnetized droplets in a new, predetermined direction, like slot cars on a track. Every rotation of the field counts as one clock cycle, like a second hand making a full circle on a clock face, and every drop marches exactly one step forward with each cycle.

A camera records the interactions between individual droplets, allowing observation of computation as it occurs in real time. The presence or absence of a droplet represents the 1s and 0s of binary code, and the clock ensures that all the droplets move in perfect synchrony, and thus the system can run virtually forever without any errors.

"Following these rules, we've demonstrated that we can make all the universal logic gates used in electronics, simply by changing the layout of the bars on the chip," said graduate student Georgios "Yorgos" Katsikis, first author on the paper. "The actual design space in our platform is incredibly rich. Give us any Boolean logic circuit in the world, and we can build it with these little magnetic droplets moving around."

Their new paper describes the fundamental operating regime of the system and demonstrates building blocks for synchronous logic gates, feedback and cascadability - hallmarks of scalable computation. A simple-state machine including 1-bit memory storage (known as "flip-flop") is also demonstrated using the above basic building blocks.

A new way to manipulate matter

The current chips are about half the size of a postage stamp, and the droplets are smaller than poppy seeds, but Katsikis said that the physics of the system suggests it can be made even smaller. Combined with the fact that the magnetic field can control millions of droplets simultaneously, this makes the system exceptionally scalable.

"We can keep making it smaller and smaller so that it can do more operations per time, so that it can work with smaller droplet sizes and do more number of operations on a chip," said graduate student and co-author Jim Cybulski. "That lends itself very well to a variety of applications."
News Articles
More Articles All Articles
About