News Staff
Corals, whose calcium-carbonate skeletons form the foundation of coral reefs, are passive organisms that rely entirely on ocean currents to deliver dissolved substances, such as nutrients and oxygen.

Or so it seemed. Scientists at MIT and the Weizmann Institute of Science (WIS) in Israel have found that they are far from passive, engineering their environment to sweep water into turbulent patterns that greatly enhance their ability to exchange nutrients and dissolved gases with their environment.

It’s long been known that corals have cilia, small threadlike appendages that can push water along the coral surface. However, these currents were previously assumed to move parallel to the coral surface, in a conveyor-belt fashion. Such smooth motion may help corals remove sediments, but would have little effect on the exchange of dissolved nutrients. Now Stocker and his colleagues show that the cilia on the coral’s surface are arranged in such a way as to produce strong swirls of water that draw nutrients toward the coral, while driving away potentially toxic waste products, such as excess oxygen. 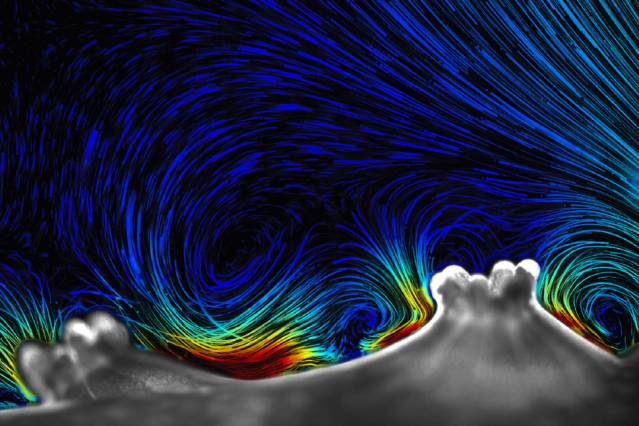 Vortical ciliary flows enhance the exchange of oxygen and nutrients between corals and their environment. The paths of tracer particles are color-coded by fluid velocity, demonstrating that the coral surface is driving the flow.  Courtesy of the researchers

“These microenvironmental processes are not only important, but also unexpected,” says Roman Stocker, an associate professor of civil and environmental engineering at MIT and senior author of a paper describing the results in the Proceedings of the National Academy of Sciences.

When the team set up their experiment with living coral in tanks in the lab, “I was expecting that this would be a smooth microworld, there would be not much action except the external flow,” Stocker says. Instead, what the researchers found, by zooming in on the coral surface with powerful microscopes and high-speed video cameras, was the opposite: Within the millimeter closest to the coral surface, “it’s very violent,” he says.

“The general thinking has been that corals are completely dependent upon ambient flow, from tides and turbulence, to enable them to overcome diffusion limitation and facilitate the efficient supply of nutrients and the disposal of dissolved waste products,” says Orr Shapiro, a postdoc from WIS and co-first author on the paper, who spent a year in Stocker’s lab making these observations.

Under such a scenario, colonies in sheltered parts of a reef or at slack tide would see little water movement and might experience severe nutrient limitation or a buildup of toxic waste, to the point of jeopardizing their survival. “Even the shape of the coral can be problematic” under that passive scenario, says Vicente Fernandez, an MIT postdoc and co-first author of the paper. Coral structures are often “treelike, with a deeply branched structure that blocks a lot of the external flow, so the amount of new water going through to the center is very low.”

The team’s approach of looking at corals with video microscopy and advanced image analysis changed this paradigm. They showed that corals use their cilia to actively enhance the exchange of dissolved molecules, which allows them to maintain increased rates of photosynthesis and respiration even under near-zero ambient flow.

The researchers tested six different species of reef corals, demonstrating that all share the ability to induce complex turbulent flows around them. “While that doesn’t yet prove that all reef corals do the same,” Shapiro says, “it appears that most if not all have the cilia that create these flows. The retention of cilia through 400 million years of evolution suggests that reef corals derive a substantial evolutionary advantage” from these flows.

Corals need to stir it up

The reported findings transform the way we perceive the surface of reef corals; the existing view of a stagnant boundary layer has been replaced by one of a dynamic, actively stirred environment. This will be important not only to questions of mass transport, but also to the interactions of marine microorganisms with coral colonies, a subject that attracts much attention due to a global increase in coral disease and reef degradation over the past decades.

Besides illuminating how coral reefs function, which could help better predict their health in the face of climate change, this research could have implications in other fields, Stocker suggests: Cilia are ubiquitous in more complex organisms — such as inside human airways, where they help to sweep away contaminants.

But such processes are difficult to study because cilia are internal. “It’s rare that you have a situation in which you see cilia on the outside of an animal,” Stocker says — so corals could provide a general model for understanding ciliary processes related to mass transport and disease.

David Bourne, a researcher at the Australian Institute of Marine Science who was not connected with this research, says the work has “provided a major leap forward in understanding why corals are so efficient and thrive. … We finally have a greater understanding of why corals have been successful in establishing and providing the structural framework of coral reef ecosystems.”

Bourne adds that Stocker has made great strides by “applying his engineering background to biological questions. This cross-disciplinary approach allows his group to approach fundamental questions from a new angle and provide novel answers.”

In addition to Stocker, Shapiro, and Fernandez, the research team included Assaf Vardi, faculty at WIS; postdoc Melissa Garren; former MIT postdoc Jeffrey Guasto, now an assistant professor at Tufts University; undergraduate François Debaillon-Vesque from MIT and the École Polytechnique in Paris; and Esti Kramarski-Winter from WIS. The work was supported by the Human Frontiers in Science Program, the National Science Foundation, the National Institutes of Health, and the Gordon and Betty Moore Foundation.
News Articles
More Articles All Articles
About