Do kids of "tiger moms" - the term used by culture for demanding mothers in Asian families and   popularized due to the 2011 book "Battle Hymn of the Tiger Mother" by Amy Chua - have lower self-esteem?

Not if the halls of Caltech are any indication. And do we need more young people with high levels of self-esteem living with their parents in their 30s? Regardless, a new paper in
the Journal of Family Issues finds that less supportive and punitive parenting techniques used by some Chinese parents might lead to the development of low self-esteem and school adjustment difficulties, leaving kids vulnerable to depression and problem behaviors.

"Our research shows that Tiger Mother type of parenting, specifically controlling, punitive, and less supportive type of parenting is really not working in this sample of Chinese adolescents," says Cixin Wang, an assistant professor at UC Riverside's Graduate School of Education. "It also shows that it is important for Chinese parents, who tend to be less emotionally expressive and use less praise in parenting, to show their approval, love and support for their children." 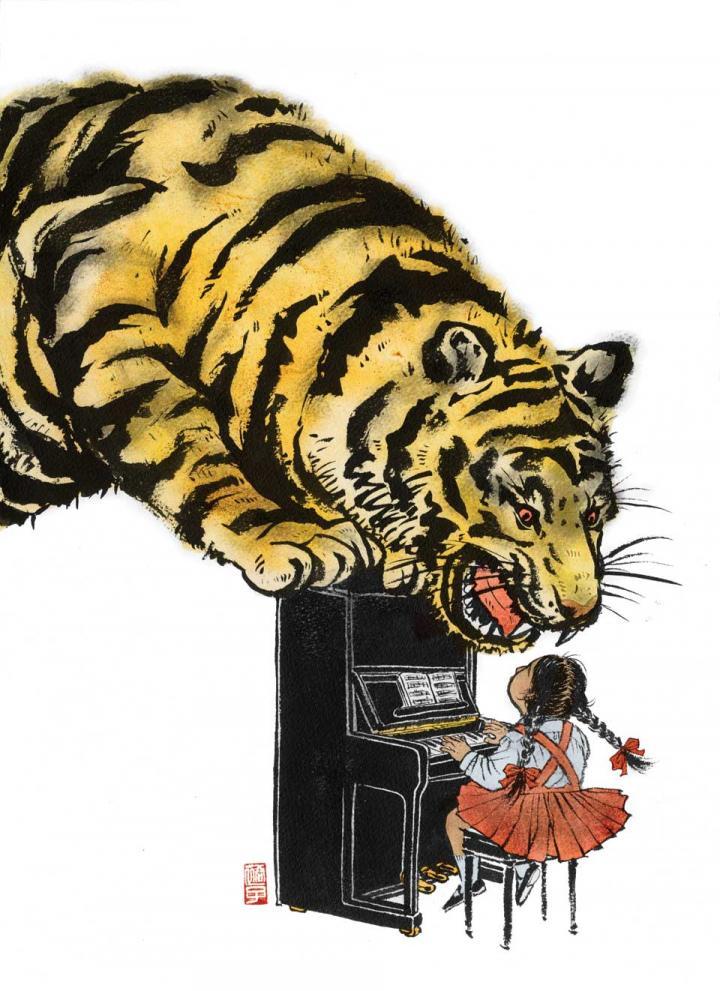 Tiger moms, maybe they need to roar a little less, according to a new paper. Credit: UC Riverside

The paper is based on data from a youth survey in Hangzhou, China. The sample included 589 middle and high school children. The survey asked the children about their perceptions of the behavior of their mothers and fathers, as well as their self-esteem, school adjustment, depression and problem behavior.

Previous research has shown that Chinese parents are less likely to show support for their children through affection. Instead, they express support through efforts to control and govern their youngsters.

Previous research on Western cultures has found that when parents exert strong psychological control over their children it leads to problem behavior, low self-esteem and low grades among the children. However, the impact of psychological control and strictness in Chinese culture has been less clear.

Wang and her co-authors show the findings from the sample of Chinese students are consistent with those from the Western students. Parental support and monitoring were associated with positive adolescent adjustment, but permissiveness and punitiveness were linked to negative adolescent adjustment. Psychological control, specifically love withdrawal techniques, did not predict any adolescent outcomes after controlling for other parenting practices.

The study also has implications for Chinese Americans and other Asian Americans, who are often trying to balance traditional cultural norms with popular parenting practice in American society today. Future work by Wang will focus on mental health literacy among Asian Americans students, specifically around the stigma of seeking help related to depression and other mental health difficulties.

She is interested in these issues in part because of her upbringing in China. Growing up in Shanghai, she was not frequently praised by her parents. She remembers being in first grade, getting a 99 percent on an assignment and her mother being upset she didn't get 100 percent.

"I hear Asian parents saying that they are concerned about using too much praise with their children because they were not brought up this way," Wang said. "In a way, I missed out on getting parental praise and approval. And, in a way, I don't want a whole generation of Asian kids to miss that really important piece too."