News Staff
If you need a reason to drink wine, there is more good news from the world of science. A recent study exposed human liver and fat cells grown in the lab to extracts of four natural chemicals found in Muscadine grapes, a dark-red variety native to the southeastern United States.

One of the chemicals, ellagic acid, proved particularly potent: It dramatically slowed the growth of existing fat cells and formation of new ones, and it boosted metabolism of fatty acids in liver cells.

These plant chemicals are not a weight-loss miracle, cautions Neil Shay, a biochemist and molecular biologist at Oregon State University. "We didn't find, and we didn't expect to, that these compounds would improve body weight," he said. But by boosting the burning of fat, especially in the liver, they may improve liver function in overweight people. 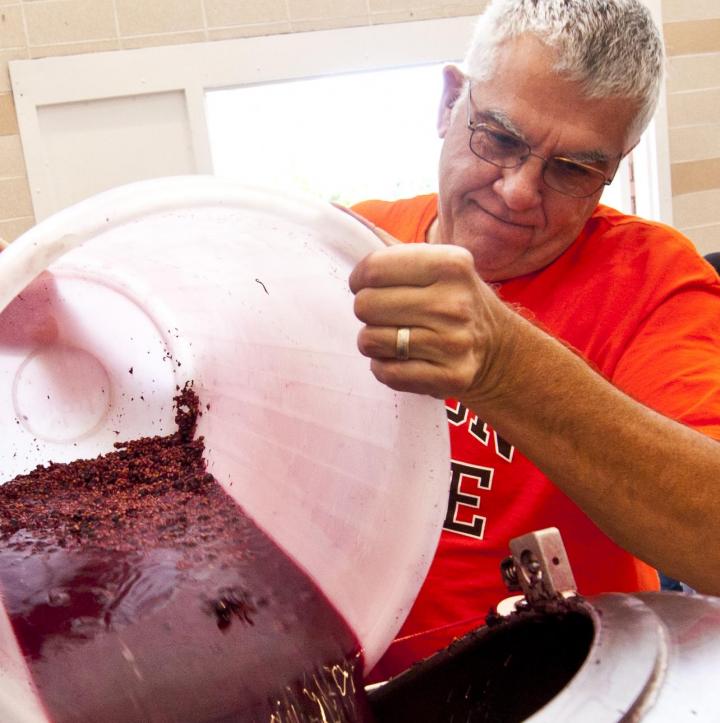 "If we could develop a dietary strategy for reducing the harmful accumulation of fat in the liver, using common foods like grapes," said Neil Shay, a biochemist and molecular biologist at Oregon State University, "that would be good news."

The study, which Shay conducted with colleagues at the University of Florida and University of Nebraska, complements work with mice he leads at his OSU laboratory. In one 2013 trial, he and his graduate students supplemented the diets of overweight mice with extracts from Pinot noir grapes harvested from Corvallis-area vineyards.

Some of the mice were fed a normal diet of "mouse chow," as Shay calls it, containing 10 percent fat. The rest were fed a diet of 60 percent fat - the sort of unhealthy diet that would pile excess pounds on a human frame.

"Our mice like that high-fat diet," said Shay, "and they overconsume it. So they're a good model for the sedentary person who eats too much snack food and doesn't get enough exercise."

The grape extracts, scaled down to a mouse's nutritional needs, were about the equivalent of one and a half cups of grapes a day for a person. "The portions are reasonable," said Shay, "which makes our results more applicable to the human diet."

Over a 10-week trial, the high-fat-fed mice developed fatty liver and diabetic symptoms - "the same metabolic consequences we see in many overweight, sedentary people," Shay said.

But the chubby mice that got the extracts accumulated less fat in their livers, and they had lower blood sugar, than those that consumed the high-fat diet alone. Ellagic acid proved to be a powerhouse in this experiment, too, lowering the high-fat-fed mice's blood sugar to nearly the levels of the lean, normally fed mice.

When Shay and his colleagues analyzed the tissues of the fat mice that ate the supplements, they noted higher activity levels of PPAR-alpha and PPAR-gamma, two proteins that work within cells to metabolize fat and sugar.

Shay hypothesizes that the ellagic acid and other chemicals bind to these PPAR-alpha and PPAR-gamma nuclear hormone receptors, causing them to switch on the genes that trigger the metabolism of dietary fat and glucose. Commonly prescribed drugs for lowering blood sugar and triglycerides act in this way, Shay said.

The goal of his work, he added, is not to replace needed medications but to guide people in choosing common, widely available foods that have particular health benefits, including boosting metabolic function.

"We are trying to validate the specific contributions of certain foods for health benefits," he said. "If you're out food shopping, and if you know a certain kind of fruit is good for a health condition you have, wouldn't you want to buy that fruit?"

The study has wine and science and those are bug lights for mainstream media. Look for ellagic acid to be the big thing for 2016.