A strange thing happened during climate change policy debates: Advances in hydraulic fracturing - fracking - put trillions of dollars' worth of previously unreachable oil and natural gas within humanity's grasp, and using it led to reductions in CO2 in the United States.

America disavowed nuclear energy due to anti-science beliefs and lobbying by environmental groups and adopted dirty coal in its place. Ironically, environmental groups caused global warming by getting Democrats to ban nuclear energy and America led the world in emissions through most of the 1990s. In the last decade, though, fracking cleaner natural gas caused those emissions to plummet and now emissions from the US energy sector are back at early 1990s levels while emissions from coal are at early 1980s levels. That has been a win for the environment.

A new paper by environmental scientists is a meta-analysis of 165 academic paper and government databases to examine its influence on local air pollution, earthquakes and clean water. Some of their concerns are stuck in a technological rut; they worry that fracking uses water, for example, but that is a lot like worrying about how much water it takes to grow coffee in Colombia. The regions using the water have plenty. 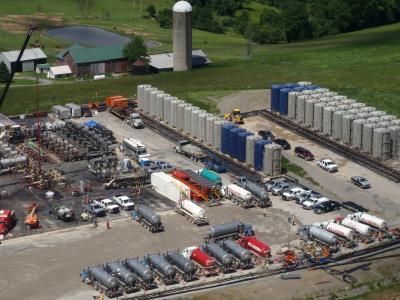 Fracking operation at a well pad near a farm over the Marcellus
shale formation in Pennsylvania. Credit: Robert Jackson, Stanford University

Fracking does use more water than conventional drilling, but coal uses more than twice the water per megawatt-hour generated than gas in the fracking chain does. And
fracked gas requires less than 1/100th the water of corn ethanol per unit of energy.

They note that solar and wind power use almost no water and emit no greenhouse gases but they are also not viable yet. Those have not been a failure because of a lack of spending, the American government has given out tens of billions of dollars in subsidies to those efforts, but due to the technology not being ready, and that it will never be ready if the government keeps writing checks for what already exists, fracking has been a good bridge to a cleaner future without energy rationing.

Like water, the impact of fracking on climate change and local air pollution is also obvious - environmentalists advocated natural gas for 40 years for those reasons. Initially, getting a fractured well going is more intense than for conventional oil and gas drilling - but that is the case with any energy source. Solar farms have had trouble getting approval because of environmental lawsuits, and that is without mentioning the environmental strain from production of the panels.

Most importantly, when natural gas replaces coal as a fuel for generating electricity, the benefits to air quality include lower carbon dioxide emissions than coal and almost none of the mercury, sulfur dioxide or ash.

In the eastern United States, environmentalists have promoted fears of contaminated drinking water, but gas and chemicals from man-made fractures thousands of meters underground very have not defied the laws of physics and seeped upward to drinking-water aquifers. There is evidence of natural methane in drinking water, but that was caused by nature and some legacy drilling, not fracking.

Is methane contamination observed in drinking water a precursor to other toxins, like arsenic, various salts, radioactive radium and other metals? Some papers insist it can be but that is the downside to large reviews, with little effort to calibrate the validity of them all.

The real concerns are failures in the steel and cement casings of wells nearer to the surface and the disposal of wastewater, the study finds. The technology is getting better, and standards will improve that, but in the past casings have failed 1 percent of the time while unsubstantiated claims are they will fail 10 percent of the time.

How oil and gas companies handle wastewater – fluid used to fracture the shale that flows back up the well and water unleashed with the oil and gas – shows the importance of state policies. "Wastewater disposal is one of the biggest issues associated with fracking," said co-author Avner Vengosh, a professor of geochemistry at Duke University. Most fracking wastewater in the United States is injected deep underground, but almost all of it is recycled for subsequent drilling or sent to advanced water treatment facilities.

A handful of states still allow the wastewater to be used for watering cattle, sprayed onto roads for dust control or sent to municipal water-treatment plants not equipped to handle the chemicals involved, and those are bad ideas, say the authors. They cite one study which claimed that agricultural use of fracking wastewater killed more than half of nearby trees within two years but outlier claims aside, until the issue is thoroughly studied the water should simply be recycled rather than used in the environment.

Injection of wastewater deep underground presents its own problems - perceptual as well as real.  Fracturing of shale miles below the surface has not caused any earthquakes but older shallow wells, including wells that use water but are not actually fracking, have been implicated in places like Oklahoma, and they have been felt by human beings. The dangers of seismicity can be reduced if energy companies follow basic guidelines and undertake careful monitoring.

The study highlights several policies and practices that could optimize fracking's environmental cost-benefit balance, and it highlights the need for further research. For example, the direct impact on the health of nearby residents is virtually unknown. "Almost no comprehensive research has been done on health effects," said Jackson, "but decisions about drilling – both approvals and bans on fracking – are made all the time based on assumptions about health risks."