News Staff
Anyone that has eaten chicken knows what a drumstick is - it's the lower leg of a long, spine-like bone, more specifically the fibula, one of the two long bones of the lower leg (the outer one).

In dinosaurs, the ancestors of birds, this bone is tube-shaped and reaches all the way down to the ankle, but in evolution birds lost the lower end, and no longer connects to the ankle, being shorter than the other bone in the lower leg, the tibia. In the 19th century, scientists had noted that bird embryos first develop a tubular, dinosaur-like fibula. Only afterwards, it becomes shorter than the tibia and acquires its adult, splinter-like shape.

In normal bone development, the shaft matures and ceases growth (cell division) long before the ends do.  Brazilian researcher Joâo Botelho at the University of Chile decided to study the mechanisms that underlie this transformation and found that molecular mechanisms of maturation were active very early at the lower end, ceasing cell division and growth.

When a maturation gene called Indian Hedgehog was inhibited, chickens kept a tubular fibula as long as the tibia and connected to the ankle - just like a dinosaur. 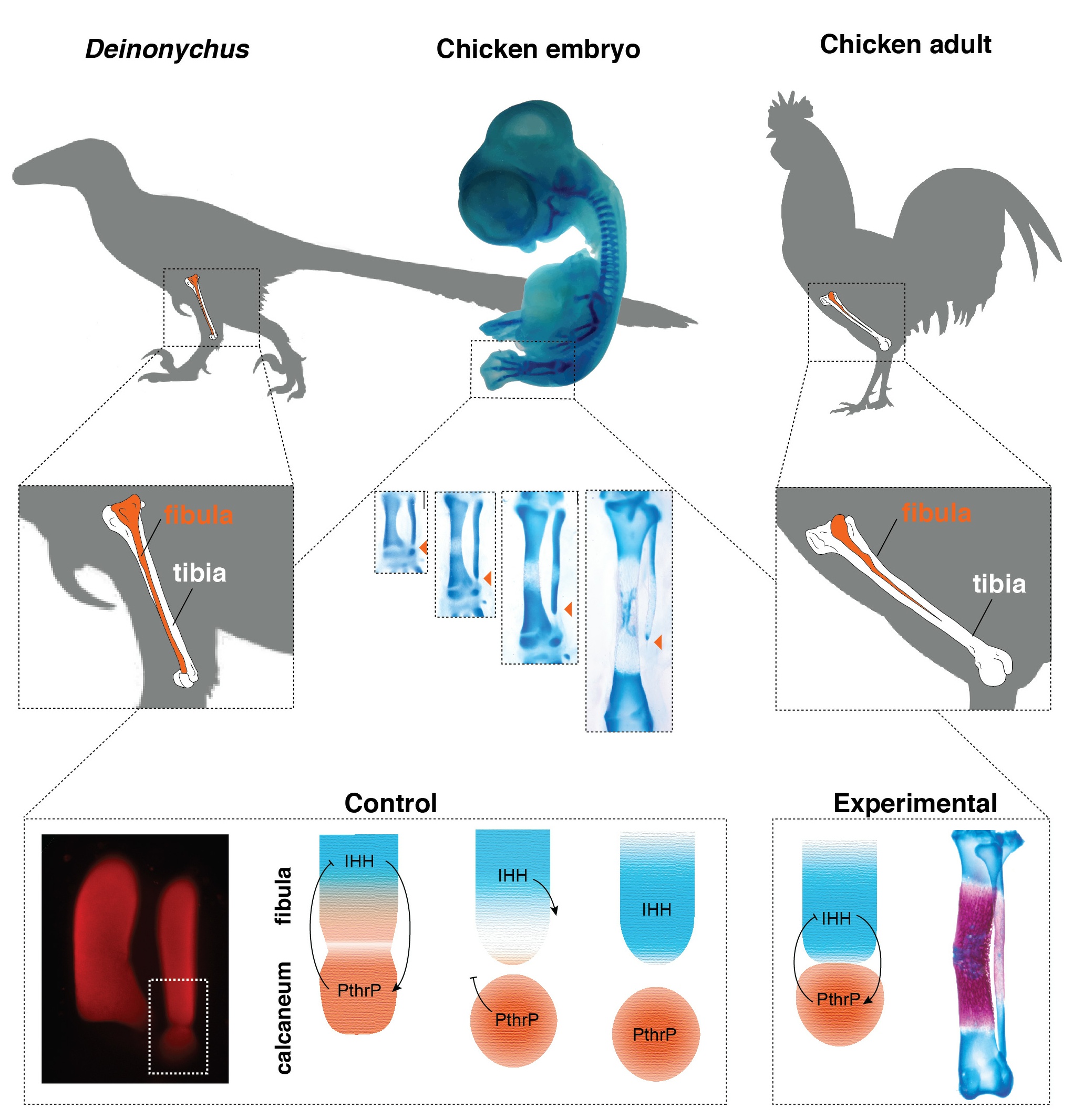 The fibula bone (orange) in Dinosaurs is as long as the tibia and reaches down to the ankle (upper left), whereas in adult birds, it is splinter-like and shorter than the tibia, missing its lower end (upper right). However, bird embryos actually start out like dinosaurs, and then develop their adult anatomy (center). The transformation can be stopped by experimental inhibition of Indian Hedgehog (IHH), a bone maturation gene, which leads to a bird with a dinosaur-like fibula (lower right)

What else did they find in the experimental chickens? The other bone of the lower leg, the tibia, was significantly shorter. This suggests that a dinosaur-like fibula connected to the ankle stops the tibia from outgrowing the fibula, as it would normally do. Working with Jingmai O’Connor (IVPP, China), the research team realized this was consistent with an evolutionary pattern documented by the fossil record. The earliest forms to evolve reduced fibulas were toothed birds from the early cretaceous age, which lived alongside dinosaurs. These forms had splinter-like fibulas that did not connect to the ankle, but were almost as long as the tibia.

The fibula first lost its lower end in evolution. This may have allowed the evolution of tibias that are much longer than the fibula, which occurred afterwards.

Citation: Molecular development of fibular reduction in birds and its evolution from dinosaurs. Evolution doi: 10.1111/evo.12882.
News Articles
More Articles All Articles
About