News Staff
Using ESA’s Rosetta spacecraft, scientists have identified more than a hundred patches of water ice a few meters in size on the surface of Comet 67P/Churyumov-Gerasimenko. Rosetta arrived at the comet in August 2014 at a distance of about 100 kilometers and eventually orbited the comet at 10 kilometers or less, allowing high-resolution images of the surface to be acquired.

Based on observations of the gas emerging from comets, they are known to be rich in ices. As they move closer to the Sun along their orbits, their surfaces are warmed and the ices sublimate into gas, which streams away from the nucleus, dragging along dust particles embedded in the ice to form the coma and tail.  But some of the comet’s dust also remains on the surface as the ice below sublimates, or falls back on to the nucleus elsewhere, coating it with a thin layer of dusty material and leaving very little ice directly exposed on the surface. These processes help to explain why Comet 67P/Churyumov-Gerasimenko and other comets seen in previous flyby missions are so dark. 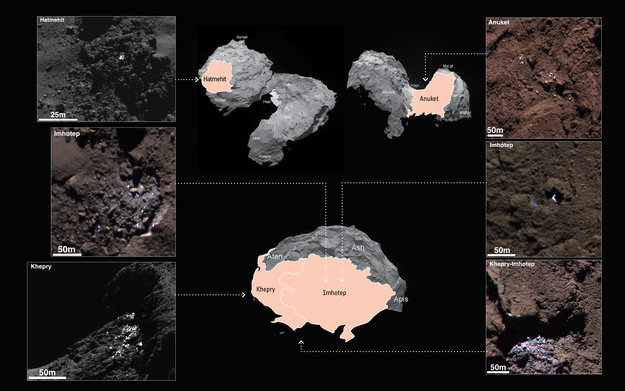 Despite this, Rosetta’s suite of instruments has already detected a variety of gases, including water vapor, carbon dioxide and carbon monoxide, thought to originate from frozen reservoirs below the surface. Using images taken with Rosetta’s OSIRIS narrow-angle camera last September, scientists have identified 120 regions on the surface of Comet 67P/Churyumov-Gerasimenko that are up to 10X brighter than the average surface brightness.

Some of these bright features are found in clusters, while others appear isolated, and when observed at high resolution, many of them appear to be boulders displaying bright patches on their surfaces.

The clusters of bright features, comprising a few tens of meter-sized boulders spread over several tens of metres, are typically found in debris fields at the base of cliffs. They are most likely the result of recent erosion or collapse of the cliff wall revealing fresher material from below the dust-covered surface.

By contrast, some of the isolated bright objects are found in regions without any apparent relation to the surrounding terrain. These are thought to be objects lifted up from elsewhere on the comet during a period of cometary activity, but with insufficient velocity to escape the gravitational pull of the comet completely.

In all cases, however, the bright patches were found in areas that receive relatively little solar energy, such as in the shadow of a cliff, and no significant changes were observed between images taken over a period of about a month. Furthermore, they were found to be bluer in color at visible wavelengths compared with the redder background, consistent with an icy component.