News Staff
ESA’s Rosetta mission has concluded as planned, with the controlled impact onto the small lobe of Comet 67P/Churyumov–Gerasimenko, close to a region of active pits in the Ma’at region, which it had been investigating for more than two years.

Confirmation of the end of the mission arrived at ESA’s control centre in Darmstadt, Germany at 11:19 GMT (13:19 CEST) with the loss of Rosetta’s signal upon impact, but the descent gave Rosetta the opportunity to study the comet’s gas, dust and plasma environment very close to its surface, as well as take very high-resolution images.  Pits are of particular interest because they play an important role in the comet’s activity. They also provide a unique window into its internal building blocks.

“Rosetta was on the drawing board even before ESA’s first deep-space mission, Giotto, had taken the first image of a comet nucleus as it flew past Halley in 1986," said Alvaro Giménez, ESA’s Director of Science.  “The mission has spanned entire careers, and the data returned will keep generations of scientist busy for decades to come.” 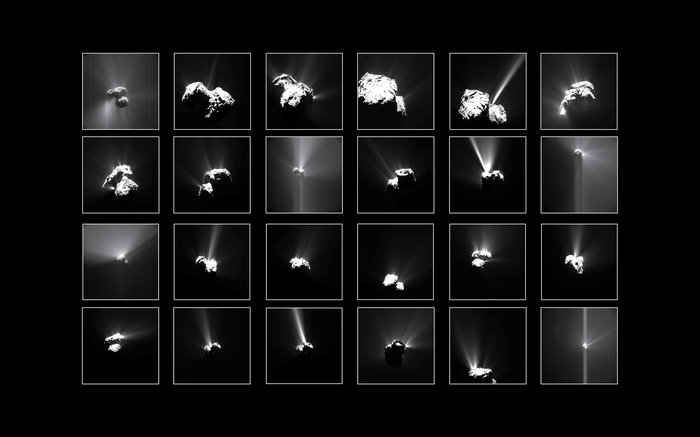 Since launch in 2004, Rosetta was in its sixth orbit around the Sun. Its nearly 8 billion-kilometre journey included three Earth flybys and one at Mars, and two asteroid encounters. The craft endured 31 months in deep-space hibernation on the most distant leg of its journey, before waking up in January 2014 and finally arriving at the comet in August 2014. After becoming the first spacecraft to orbit a comet, and the first to deploy a lander, Philae, in November 2014, Rosetta continued to monitor the comet’s evolution during their closest approach to the Sun and beyond.

“We’ve operated in the harsh environment of the comet for 786 days, made a number of dramatic flybys close to its surface, survived several unexpected outbursts from the comet, and recovered from two spacecraft ‘safe modes’,” says operations manager Sylvain Lodiot.  “The operations in this final phase have challenged us more than ever before, but it’s a fitting end to Rosetta’s incredible adventure to follow its lander down to the comet.”

The decision to end the mission on the surface is a result of Rosetta and the comet heading out beyond the orbit of Jupiter again. Further from the Sun than Rosetta has ever journeyed before, there would be little power to operate the craft.

Mission operators were also faced with an imminent month-long period when the Sun is close to the line-of-sight between Earth and Rosetta, meaning communications with the craft would have become increasingly more difficult.