News Staff
We have beneficial bacteria because of symbiosis: the success of the host determines the survival and spread of the microbe. But if bacteria grow too much they may become deadly. In a new study, a research team from Instituto Gulbenkian de Ciencia found that a single genomic change can turn beneficial bacteria into pathogenic bacteria, by boosting bacterial density inside the host.

Ewa Chrostek and Luis Teixeira studied the symbiosis between a fruit fly (Drosophila melanogaster) and the bacterium Wolbachia to answer how benign bacteria become pathogenic. Wolbachia is present in most insect species and protects some of them against viruses, including the dengue fever virus.

Previous studies conducted by Luis Teixeira's team showed that the number of Wolbachia inside the fruit fly determines its effect on the host. Bacteria that reach very high levels inside the fly become harmful. Hence, this research team set out to investigate the genetic basis that control bacteria density inside the host and, consequently, their pathogenicity. 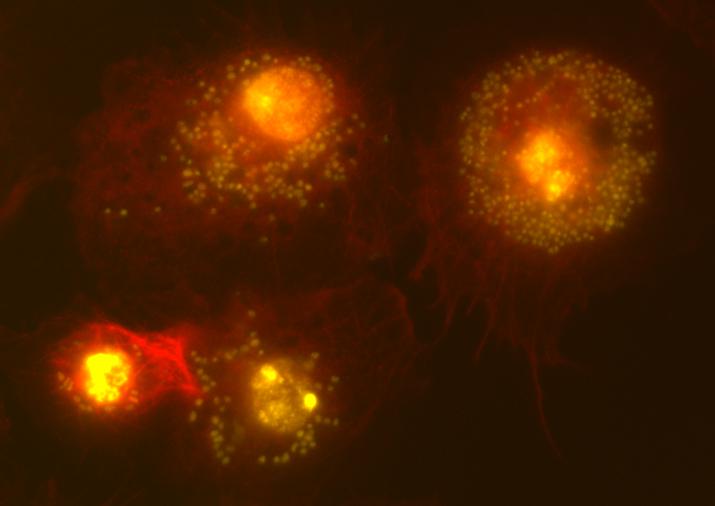 The small yellow dots surrounding bright yellow cell nuclei in each cell are Wolbachia. The cytoskeleton (in red) allows seeing the shape of the cells. Credit: Ewa Chrostek (IGC)

Comparison of pathogenic and non-pathogenic Wolbachia variants suggested that the number of repeats of a specific region of the genome called Octomom was causing the difference in Wolbachia virulence. The authors show that the number of copies of this region was variable between individual flies. The bacteria with more Octomom copies grow faster reaching higher densities inside the fruit flies. Consequently, the more copies, the earlier the flies die. On the other hand, more copies of the Octomom region and higher Wolbachia levels in flies provide stronger antiviral protection.

Ewa Chrostek, who just finished her PhD at Luis Teixeira's laboratory, says: "We show that Octomom copy number can change rapidly, leading to different Wolbachia infection outcomes for the fly. These bacteria can evolve really fast and easily break away from hosts' control."

Luis Teixeira explains further: "We discovered a region of the Wolbachia genome responsible for regulation of its densities in the flies. This is the first study linking genes and their functions in this bacteria and it provides a unique point of entry for the understanding of the widespread insect-Wolbachia symbiosis."

Currently, as part of a strategy to control dengue transmission, mosquitoes (Aedes aegypti) infected with Wolbachia bacteria are being released in the wild. Therefore, understanding mechanisms of potential Wolbachia evolution and Wolbachia densities control is extremely important.

Citation: Ewa Chrostek and Luis Teixeira (2015). Mutualism breakdown by amplification of Wolbachia genes. PLOS Biology. This research was funded by Fundacao para a Ciencia e a Tecnologia (Portugal) and the Wellcome Trust (UK).
News Articles
More Articles All Articles
About