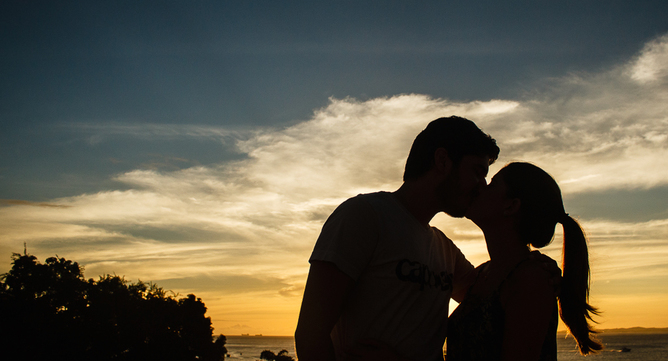 Want to suck all of the fun out of romance and dating? Talk with a humanities scholar in family dating researcher.

Just in time for Valentine's Day, a University of Illinois academic has identified four distinct approaches that dating couples use to develop deeper commitment. "The four types of dating couples that we found included the dramatic couple, the conflict-ridden couple, the socially involved couple, and the partner-focused couple," said Brian Ogolsky, assistant professor of human development and family studies.

He and co-authors developed these categories after studying graphs created by 376 dating couples in their mid-twenties. Over a nine-month period, participants tracked how committed they were to marrying their partner and why. Ogolsky asked participants to explain their reasoning when their commitment level had gone up or down.

Dramatic daters are twice as likely to break up as other couples, he said.

"These couples have a lot of ups and downs, and their commitment swings wildly. They tend to make decisions based on negative events that are occurring in the relationship or on discouraging things that they're thinking about the relationship, and those things are likely to chip away at their commitment," he said. "It's not unlike when the transmission goes out on your car, and then your starter goes out. You begin to see little things eroding, and you start to see the relationship in a negative light, and soon you give up."

Dramatic couples also make attribute changes in their commitment to time spent with their own friends or by doing things separately rather than as a couple. "They were hanging on to their individuality in a way that may be unconventional for early daters," he said.

Partner-focused couples have the highest chance of staying together and being happy over time, Ogolsky said.

"These partners are very involved with each other and dependent on each other, and they use what's happening in their relationship to advance their commitment to deeper levels. People in these couples had the highest levels of conscientiousness, which suggests that they are very careful and thoughtful about the way they approach their relationship choices," he said.

Partner-focused couples may share a social network, but they don't use those connections to propel their commitment forward, he noted.

Conflict-ridden couples may experience decreases in their commitment when they have an argument. Their commitment level may fall, but it doesn't mean they'll break up, he said.

"These couples operate in a tension between conflict that pushes them apart and passionate attraction that pulls them back together. This kind of love may not be sustainable in the long term--you'd go crazy if you had 30 to 50 years of mind-bending passion. Partners may change from one group to another over time," he noted.

Socially involved couples, like partner-focused couples, report high levels of satisfaction and stability in their relationships. These couples share a social network and rely on that network to make decisions about their commitment decisions, Ogolsky said.

"Ideally long-term relationships should be predicated on friendship-based love," Ogolsky said. "And having mutual friends makes people in these couples feel closer and more committed.

What's the point of categorizing couples in this way?

"The important message is that there are certain ways of making commitment-related decisions that propel you forward, and others push you backward. It can be helpful for couples to think about these patterns and the ways they make important decisions about the future of their relationship," Ogolsky said.

"Pathways of Commitment to Wed: The Development and Dissolution of Romantic Relationships" is available pre-publication online in the Journal of Marriage and Family. Brian G. Ogolsky and J. Kale Monk of the University of Illinois at Urbana-Champaign and Catherine A. Surra of Pennsylvania State University at Harrisburg co-authored the study.