Abortion and teen pregnancy dropped among teens who received free contraception and were educated about the pros and cons of various birth control methods, according to a new study in the New England Journal of Medicine.

The study promoted the use of long-acting forms of birth control, such as intrauterine devices (IUDs) and implants, because of their superior effectiveness in preventing unintended pregnancies. Among the 1,404 teens enrolled in the Contraceptive CHOICE Project, 72 percent opted for IUDs or implants. This compares with an estimated 5 percent of U.S. teens who choose long-acting birth control.
In the United States, most teens opt for less-reliable contraceptives such as birth control pills or condoms or no method at all because of cost and other factors. 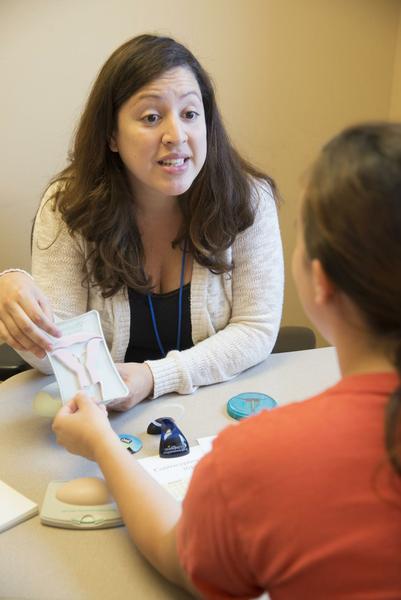 Among teens in the study, almost 500 were minors ages 14-17 when they enrolled. Half of these minors reported having had a prior unintended pregnancy, and 18 percent had had at least one abortion.

Although the teen pregnancy rate in the United States has declined in the past two decades, it remains far higher than in other industrialized countries. Each year, more than 600,000 teens in the United States become pregnant, with three in 10 teens becoming pregnant before they turn 20.

"When we removed barriers to contraception for teens such as lack of knowledge, limited access and cost in a group of teens, we were able to lower pregnancy, birth and abortion rates," said Gina Secura, PhD, the study's first author and director of the CHOICE Project. "This study demonstrates there is a lot more we can do to reduce the teen pregnancy rate."

"The difference in pregnancy, birth and abortion rates between teens enrolled in the Contraceptive CHOICE Project and U.S. teens is remarkable," said Jeffrey Peipert, MD, PhD, principal investigator of the CHOICE Project and the Robert J. Terry Professor of Obstetrics and Gynecology.

In addition to the negative health and social consequences suffered by teen mothers and their children, U.S. teen births cost almost $10 billion annually in public assistance, health care and lost income, according to The National Campaign to Prevent Teen and Unplanned Pregnancy in 2010.

The researchers analyzed data on teens enrolled in the Contraceptive CHOICE Project, a study of more than 9,000 St. Louis women and adolescents at high risk for unintended pregnancy and willing to start a new contraceptive method. Participants had their choice of a full array of birth control options, ranging from long-acting contraceptives such as IUDs and implants to shorter-acting forms like birth control pills, patches, rings, condoms or natural family planning. The teens then were followed for two to three years.

This study supports results from a previous study of the Contraceptive CHOICE Project that determined that providing birth control at no cost substantially reduced unplanned pregnancies and cut abortion rates by a range of 62-78 percent compared with the national rate.

Teens in the current study who chose IUDs or implants continued to use them longer than those who opted for shorter-acting methods such as the pill. Two-thirds of teens in the study still were using IUDs and implants at 24 months after beginning their use compared with only a third of teens still using shorter-acting methods such as birth control pills.

"We were pleasantly surprised by the number of teens choosing IUDs and implants and continuing to use them," Peipert said. "It's exciting that this study could provide insight into how to tackle this major health problem that greatly affects teens, their children and their communities."

Teen pregnancy has been designated by the U.S. Centers for Disease Control and Prevention as one of the six Winnable Battles because of the magnitude of the problem and the belief that it can be addressed by known, effective strategies. The Winnable Battle target is to reduce the teen birth rate by 20 percent ,from 37.9 per 1,000 teens in 2009 to 30.3 per 1,000 teens by 2015.