A type of two-star system known as a Cataclysmic Variable, where one super dense white dwarf star is stealing gas from its companion star, effectively 'cannibalizing' it, has been found by citizen scientists. It is the first known such system where one star completely eclipses the other.

The system, named Gaia14aae, is located about 730 light years away in the Draco constellation. Amateurs discovered it in data from the European Space Agency's Gaia satellite of August 2014, when it suddenly became five times brighter over the course of a single day.

Astronomers then analyzed the information and determined that the sudden outburst was due to the fact that the white dwarf - which is so dense that a teaspoonful of material from it would weigh as much as an elephant - is devouring its larger companion. 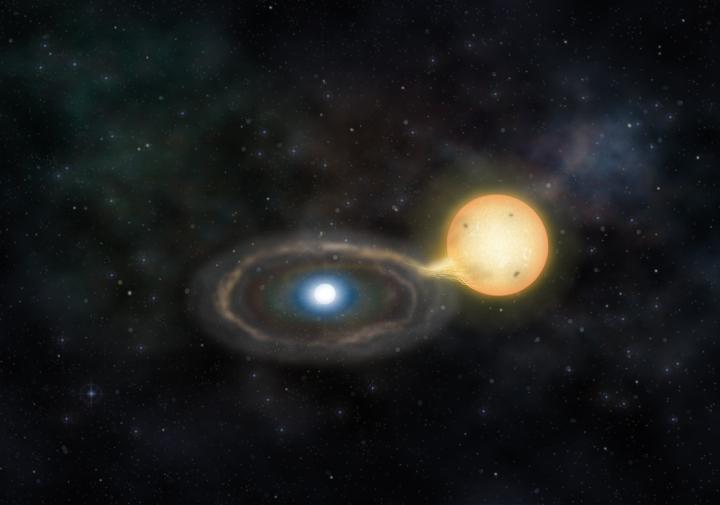 Additional observations of the system made by the Center for Backyard Astrophysics (CBA), a collaboration of amateur and professional astronomers, found that the system is a rare eclipsing binary, where one star passes directly in front of the other, completely blocking it out when viewed from Earth. The two stars are tightly orbiting each other, so a total eclipse occurs roughly every 50 minutes.

Using spectroscopy from the William Herschel Telescope in the Canary Islands, researchers found that Gaia14aae contains large amounts of helium, but no hydrogen, which is highly unusual as hydrogen is the most common element in the Universe. The lack of hydrogen allowed them to classify Gaia14aae as a very rare type of system known as an AM Canum Venaticorum (AM CVn), a type of Cataclysmic Variable system where both stars have lost all of their hydrogen. This is the first known AM CVn system where one star totally eclipses the other. AM CVn systems consist of a small and hot white dwarf star which is devouring its larger companion. The gravitational effects from the hot and superdense white dwarf are so strong that it has forced the companion star to swell up like a massive balloon and move towards it.

The companion star is about 125 times the volume of our sun, and towers over the tiny white dwarf, which is about the size of the Earth - this is similar to comparing a hot air balloon and a marble. However, the companion star is lightweight, weighing in at only one percent of the white dwarf's mass. AM CVn systems are prized by astronomers, as they could hold the key to one of the greatest mysteries in modern astrophysics: what causes Ia supernova explosions?

Published in Monthly Notices of the Royal Astronomical Society. The research was supported by ESA Gaia, DPAC, and the DPAC Photometric Science Alerts Team.
The follow-up campaign used several professional telescopes, including those located in the Canary Islands, where observing time was made available through the International Time Program.