News Staff
French artist Paul Gauguin has had quite the resurgence - having a painting sell for nearly $300 million will do that - but the artist noted for his colorful paintings of Tahitian life was also a highly experimental printmaker.

The techniques and materials Gauguin used to create his unusual and complex graphic works are little studied but a team from Northwestern University and the Art Institute of Chicago used a simple light bulb, an SLR camera and computational power to uncover new details of Gauguin's printmaking process -- how he formed, layered and re-used imagery to make 19 unique graphic works in the Art Institute's collection.

Northwestern computer scientist Oliver S. Cossairt discussed first report of the Northwestern-Art Institute study of the 3-D surface of the print "Nativity (Mother and Child Surrounded by Five Figures)," made by Gauguin in 190, at the AAAS meeting in San Jose. The new results establish Gauguin's use of materials and process in a chronological order, solving the puzzle of how "Nativity" was made. Gauguin created the print using a layering of images created on paper by drawings, transfer of images and two different inks. The surface topography research on "Nativity" and other graphic works by the artist will be part of a major Gauguin exhibit at the Art Institute in 2017. 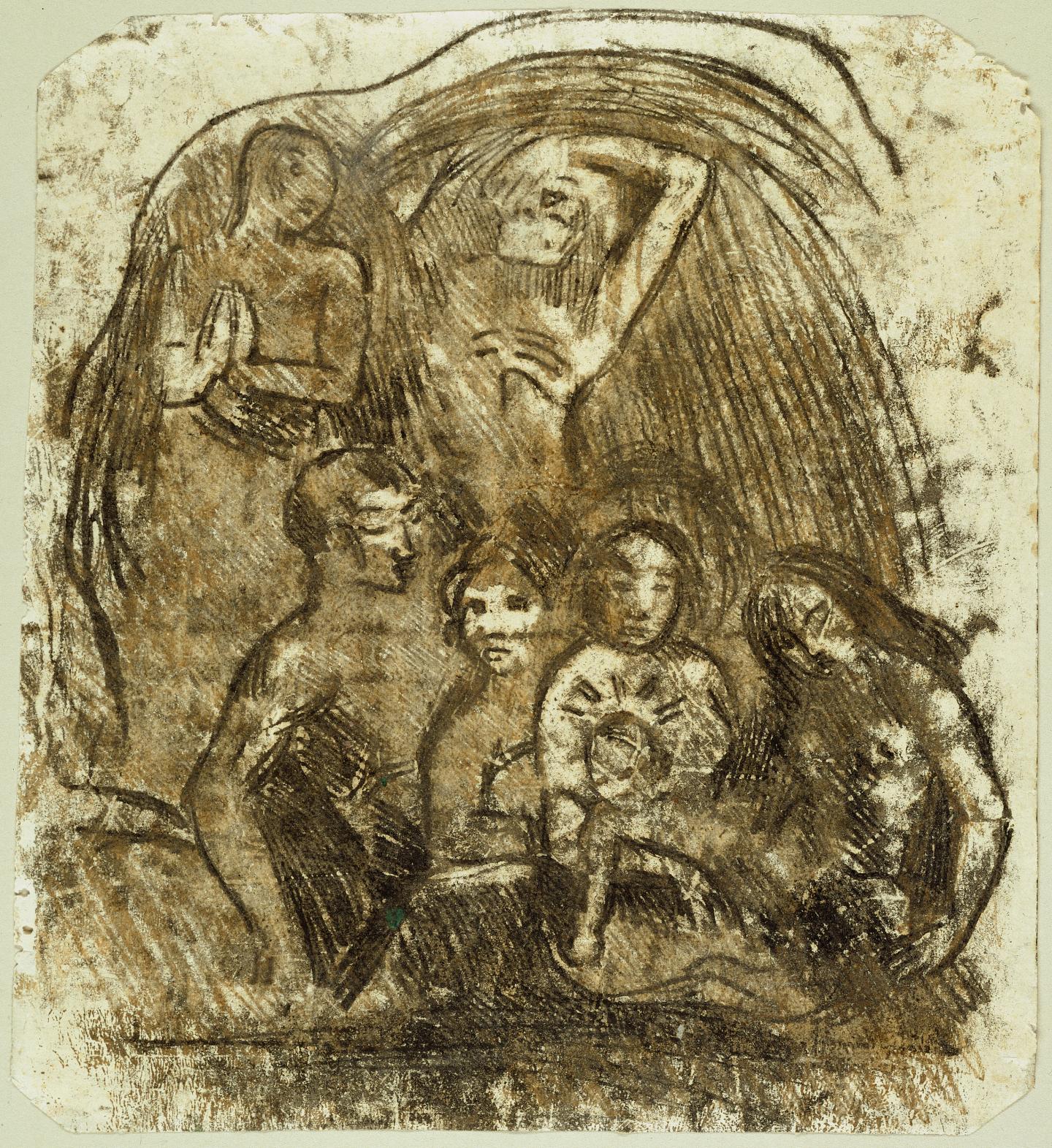 Paul Gauguin. Nativity (Mother and Child Surrounded by Five Figures), c. 1902. Credit: The Art Institute of Chicago. Gift of Robert Allerton.
The "Nativity" findings overturn an earlier theory as to how Gauguin might have produced the print. Cossairt's art conservator colleagues initially were "blown away" by the scientific results, so the research team reproduced, in an Art Institute lab, what they believed to be Gauguin's process. The printmaking process the research team had identified produced a print very similar to Gauguin's original.

"To measure the 3-D surface of the prints, we used some very accessible techniques that can be used by art conservators and historians around the world to analyze artworks," said Cossairt, who developed the software to analyze the imaging data. "In applying these techniques to Gauguin's work, we came up with some interesting answers to questions about what his printing process was."

Cossairt and colleagues studied "Nativity" and 18 other Gauguin monoprints in the Art Institute's collection. They used multiple wavelengths of light shining from different directions onto the prints to investigate the surface of the paper and reevaluate how Gauguin created his works. The photometric stereo technique allowed the researchers to mathematically separate color from surface shape, providing a much clearer view of the paper's topography.

For the study of an artwork, the piece was fixed in place, as was an SLR camera. A light bulb was moved to 20 different locations and a photo taken of the artwork for each light bulb position. The digital data for each pixel of each image then was run through Cossairt's software. Essentially, the researchers were measuring only the response of an artwork's surface to changing lighting. (Each digital image is 10 megapixels, meaning the researchers processed 20 million pixels for each artwork.)

* The white lines, in which there is an absence of ink (they have been known as "blind incisions"), are on a flat surface. This indicates those lines were not produced using a relief process but rather a transfer process, where Gauguin drew on an inked surface, removing ink, and those empty lines were transferred to his print.

* The ink of the black lines sits atop ridges in the paper, indicating a monotype transfer process was used. Gauguin would have placed his paper on an inked surface and then drawn on the back of the paper, causing ink to be transferred to the paper where pressure from the artist's pencil was applied. (The pressure also caused the ridges.)

For some of Gauguin's work, his technique is clear and unambiguous -- a straightforward oil painting or woodblock print. But for other works, it is difficult to understand his process of creation. Art Institute conservators and historians couldn't ask Gauguin about his techniques, so one year ago they turned to collaborators at Northwestern for help finding some answers.

"Gauguin died more than a century ago, but there is still something to say, something new to find out, in large part due to this teamwork," said Harriet Stratis, senior research conservator at the Art Institute and the museum's lead collaborator on the Gauguin project.

"We never would have figured this out without Northwestern, its scientists and technology, because you don't see the evidence under the microscope," Stratis said. "You can't tell the paper is just flat. The Northwestern team's lighting and imaging techniques show there is no deformation in the paper where the un-inked lines are, which blew me away.

"Gauguin probably was doing these kinds of prints for five years, so this research puts a whole body of work together," she said. "The evidence points to a completely different artistic approach by Gauguin."

This cutting-edge collaborative work was made possible through the Northwestern University-Art Institute of Chicago Center for Scientific Studies in the Arts (NU-ACCESS).

Led by Marc Walton, its senior scientist and a key collaborator on the Gauguin project, the center's mission is to provide scientific support for the investigation of art collections, as well as to develop new technology to look at art, such as the photometric stereo technique and software used by Cossairt.

"Gauguin made thousands of prints -- it often was his way of working through ideas for his colorful paintings," said Walton, co-organizer of the "Worth More Than a Thousand Words" AAAS symposium.

"By studying this one unique piece, 'Nativity,' we are developing a deeper understanding of Gauguin's highly experimental printmaking and transfer techniques that we can apply to his other works, including his paintings," he said.

The Gauguin study is just one of many collaborative projects taking place within NU-ACCESS. The center, a national model of interdisciplinary scientific research in the arts established in 2012 with support from the Andrew W. Mellon Foundation, grew out of a fruitful research partnership between Northwestern and the Art Institute.

"At the center, we are interested in determining who had access to various technologies at different time periods and how they innovated to achieve alternatives or improve on existing processes," Walton said.

"We then can use this knowledge for devising conservation treatments, for determining the provenance of objects and sometimes for authentication," he said, "but it ultimately comes back to the idea of how do people innovate and evolve? In the case of Gauguin, we are truly understanding his creative process through the application of these imaging techniques."
News Articles
More Articles All Articles
About