Using gene therapy, researchers at Boston Children's Hospital and Harvard Medical School have restored hearing in mice with a genetic form of deafness. Their work, published online July 8 by the journal Science Translational Medicine, could pave the way for gene therapy in people with hearing loss caused by genetic mutations.

"Our gene therapy protocol is not yet ready for clinical trials--we need to tweak it a bit more--but in the not-too-distant future we think it could be developed for therapeutic use in humans," says Jeffrey Holt, PhD, a scientist in the Department of Otolaryngology and F.M. Kirby Neurobiology Center at Boston Children's and an associate professor of Otolaryngology at Harvard Medical School. 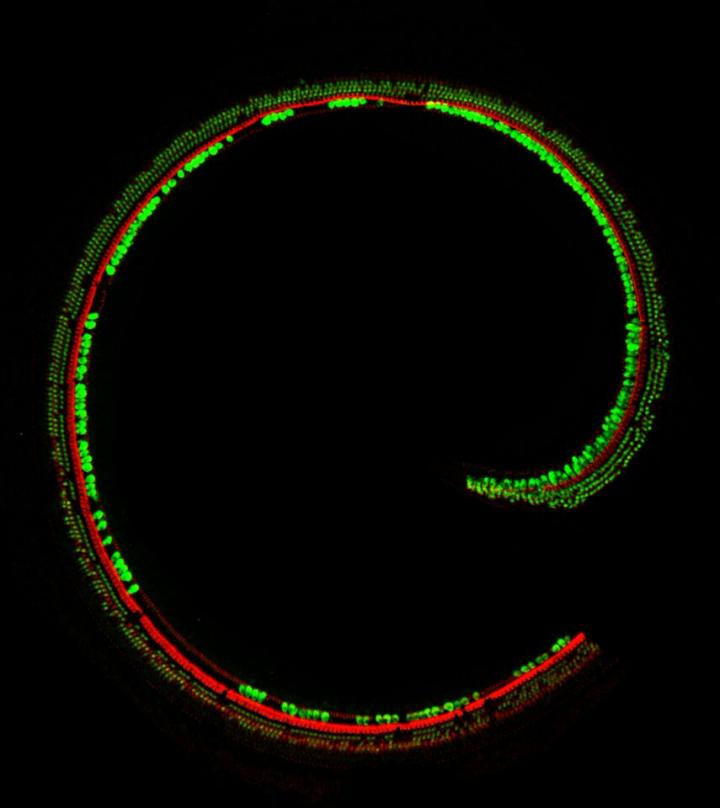 Sensory hair cells in the cochlea of a Beethoven mouse treated with TMC2 gene therapy. In this confocal microscopy image, microvilli are shown in red and cell bodies in green. Image: Charles Askew

More than 70 different genes are known to cause deafness when mutated. Holt, with first author Charles Askew and colleagues at École Polytechnique Fédérale de Lausanne in Switzerland, focused on a gene called TMC1. They chose TMC1 because it is a common cause of genetic deafness, accounting for 4 to 8 percent of cases, and encodes a protein that plays a central role in hearing, helping convert sound into electrical signals that travel to the brain.

The researchers tested gene therapy in two types of mutant mice. One type had the TMC1 gene completely deleted, and is a good model for recessive TMC1 mutations in humans: Children with two mutant copies of TMC1 have profound hearing loss from a very young age, usually by around 2 years.

The other type of mouse, called Beethoven, has a specific TMC1 mutation--a change in a single amino acid--and is a good model for the dominant form of TMC1-related deafness. In this form, less common than the recessive form, a single copy of the mutation causes children to gradually go deaf beginning around the age of 10 to 15 years.

To deliver the healthy gene, the team inserted it into an engineered virus called adeno-associated virus 1, or AAV1, together with a promoter--a genetic sequence that turns the gene on only in certain sensory cells of the inner ear known as hair cells. They then injected the gene-bearing AAV1 into the inner ear, with these findings:

Clinical trials on the horizon

AAV1 is considered safe as a viral vector and is already in use in human gene therapy trials for blindness, heart disease, muscular dystrophy and other conditions. The researchers screened various types of AAV and various types of promoters to choose the best-performing combination. They plan to further optimize their protocol and follow their treated mice to see if they retain hearing longer than the two months already observed.

Ultimately, Holt hopes to partner with clinicians at Boston Children's Department of Otolaryngology and elsewhere to start clinical trials of TMC1 gene therapy within 5 to 10 years.

"Current therapies for profound hearing loss like that caused by the recessive form of TMC1 are hearing aids, which often don't work very well, and cochlear implants," says Margaret Kenna, MD, MPH, a specialist in genetic hearing loss at Boston Children's Hospital who is familiar with the work. "Cochlear implants are great, but your own hearing is better in terms of range of frequencies, nuance for hearing voices, music and background noise, and figuring out which direction a sound is coming from. Anything that could stabilize or improve native hearing at an early age is really exciting and would give a huge boost to a child's ability to learn and use spoken language."

Holt believes that other forms of genetic deafness may also be amenable to the same gene therapy strategy. Overall, severe to profound hearing loss in both ears affects 1 to 3 per 1,000 live births.

"I can envision patients with deafness having their genome sequenced and a tailored, precision medicine treatment injected into their ears to restore hearing," Holt says.

Holt's team showed in 2013 that TMC1 and the related protein TMC2 are critical for hearing, ending a rigorous 30-year search by scientists. Sensory hair cells in the inner ear contain tiny projections called microvilli, each with a channel at its tip formed by TMC1 and TMC2 proteins. When sound waves wash over the microvilli, they wiggle and the mechanical stimulation causes the channel to open. This allows calcium to enter the cell, generating an electrical signal that travels to the brain and ultimately translates to hearing.

Although the channel is made up of either TMC1 or TMC2, a mutation in the TMC1 gene is sufficient to cause deafness. However, Holt's study also showed that gene therapy with TMC2 could compensate for loss of a functional TMC1 gene, restoring hearing in the recessive deafness model and partial hearing in the dominant deafness model.

"This is a great example of how the basic science can lead to clinical therapies," says Holt.

"The implications of successful gene therapy are profound, and we are delighted to be associated with this study program," says Ernesto Bertarelli, co-chair of the Bertarelli Foundation, the primary funder of the research. "These findings mark a defining moment in the way we understand, and can ultimately challenge, the burden of deafness in humans. The results are testament to the immense dedication of the research team and their commitment to bringing best-in-class science ever closer to real-world application."