News Staff
On one side of the political spectrum in America and across a broader swath of Europe, science is controversial - especially genetic engineering. But genetic engineering has been done since humans first deduced they could shape the natural world, if anything it has gotten precise in a way that was never possible before.

Now it mean even help fight against cancer - and it may do so using Salmonella, more famous as a bacteria that lives in intestines.

Researchers have long known that certain strains of bacteria, including Salmonella enterica, can kill cancer cells. Specifically Salmonella enterica Serovar Typhimurium has been shown to not only colonize solid tumors, but also to exhibit an intrinsic anti-tumor effect. However, in order to use Salmonella as a weapon against cancer in humans, researchers must find a balance between allowing it to kill the cancer and be safe for the patient. The bacteria, commonly known for causing severe food poisoning, can lead to sepsis and death in humans.

In the new study, the researchers focused on modifying the lipopolysaccharide structure (LPS) of the Salmonella strain to make the bug less toxic. LPS, found in the outer membrane of bacteria, is one of the major inducers of sepsis, a life-threatening infection. The researchers used genetic engineering to delete genes involved in the synthesis of the LPS, and then tested various modified Salmonella strains to see how they performed in test tube studies with human cancer cells and in tumor bearing mice.

They identified a particular mutant strain that was the most effective at killing cancer cells and shrinking tumors, and also unable to cause disease. However, this mutant strain was less able to colonize the tumors, although being most effective in killing tumor cells when getting there.

To address this problem, the researchers then added another genetic modification, an inducible arabinose promoter. The modification allowed the Salmonella to be injected in the mouse in a form that would not harm normal, healthy cells, was effective at colonizing tumors, and after entering cancer cells, would turn toxic. 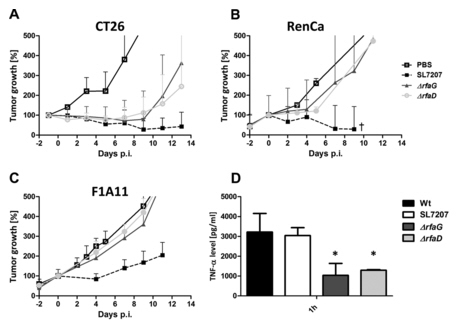 Tumor development after infection with Salmonella LPS variants. CT26 (A), RenCa (B), and F1A11 (C) tumor-bearing mice were infected i.v. with 5 × 106 bacteria. Tumor volumes were measured with a caliper. PBS served as a negative control, and SL7207 served as a positive control for comparison. (D) TNF-α levels in sera measured by ELISA at 1.5 hpi with selected LPS variants. The ΔrfaG and ΔrfaD mutants induced a lower response than WT salmonellae. The median and range are displayed. Results are representative of two independent experiments with five replicates per group. The symbol † indicates that two out of five mice succumbed to the infection. P < 0.05.

"This transition from a benign, invasive Salmonella that doesn't hurt normal cells to the toxic type occurs very rapidly (time wise) in the tumor due to the very rapid growth and cell division that occurs when Salmonella enters a tumor," said co-author Dr. Roy Curtiss, III, a Professor of Microbiology at Arizona State University. In a normal cell, Salmonella grows very slowly, dividing once or twice in a 24-hour period, but in a tumor, the bacteria divide every hour.

According to Curtiss, the investigational therapy would probably be used in conjunction with chemotherapy and radiation therapy, once it gets to human trials. "I think this study goes a significant way in developing some strategies that will help in the overall means of using Salmonella as part of a cancer therapy."