News Staff
A fossil discovery has provided a missing link that helps to resolve a more than 5-million-year gap in fur seal and sea lion evolutionary history.

This new genus and species of fur seal has been called Eotaria crypta. Eotaria means 'dawn sea lion'. The species was tiny, with adults being only slightly larger than a sea otter and around the size of a juvenile New Zealand fur seal, according to University of Otago graduate student Robert Boessenecker, who found the fossil while looking through the John D. Cooper Archaeological and Paleontological Center.

Its fossilized partial jaw, with several well-preserved teeth, was recovered from a 15-17 million-year-old rock formation in Southern California in the early 1980s, but until now had been misidentified as belonging to a walrus species. Boessenecker  says he instantly realized that it was not the small walrus Neotherium but a tiny, early fur seal. 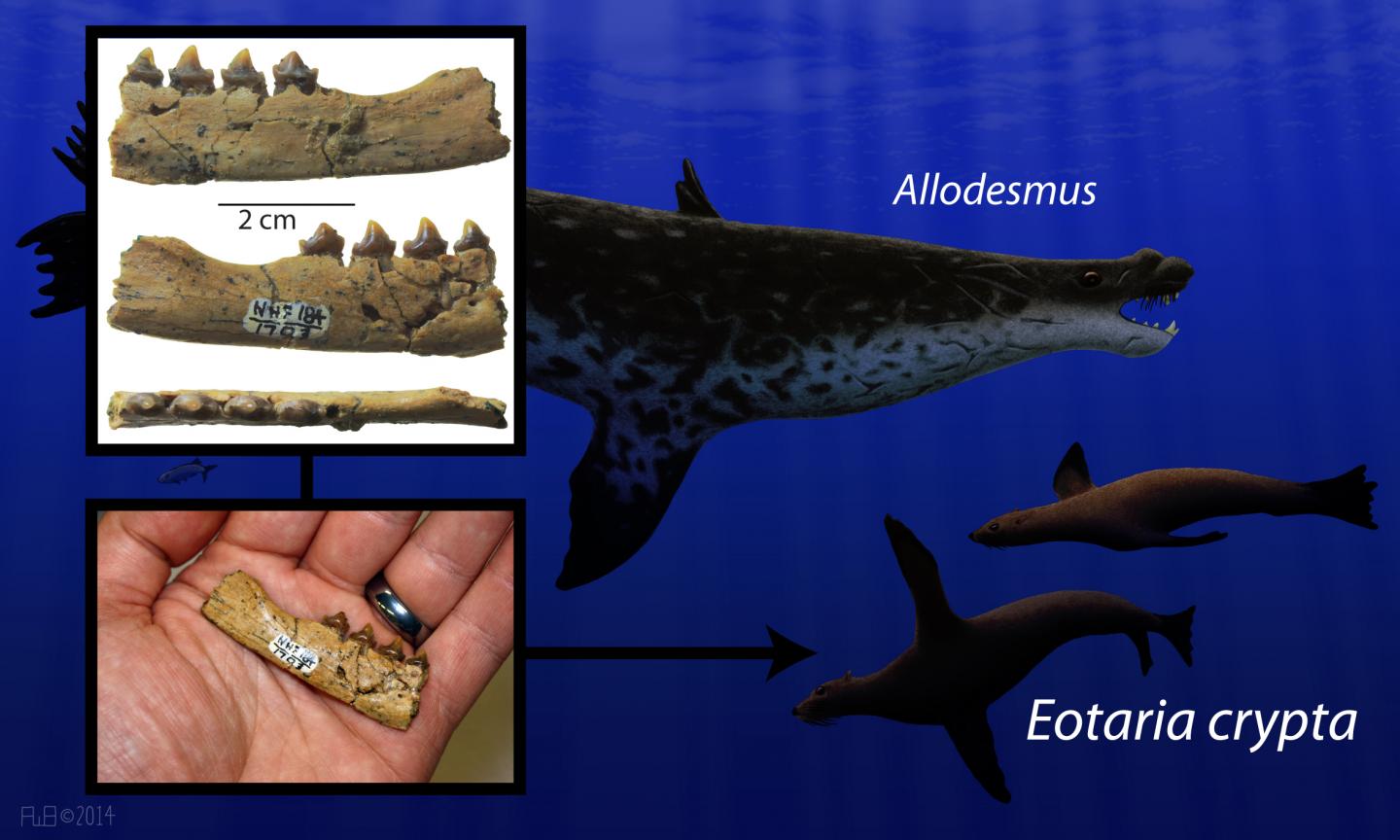 "This was very exciting as fur seals and sea lions--the family Otariidae--have a limited fossil record that, up until now, extended back to about 10-12 million years ago. Yet we know that their fossil record must go back to around 16-17 million years ago or so, because walruses - the closest modern relative of the otariids - have a record reaching back that far," he says.

In palaeontology, a gap like this is known as a 'ghost lineage', and the new research has now eliminated it. "Until now we had no fossil evidence for the first five million years of fur seal and sea lion evolution. It's extremely satisfying to have remedied that," he says.

Boessenecker says Eotaria crypta's status as a critical transitional fossil is revealed through its teeth which are intermediate between the simplified teeth of modern sea lions and the complex bear-like teeth of the earliest known pinnipeds. "The mystery remains of why there has only been one of these fur seals ever found given that there have been extensive fossil excavations of similarly aged rocks in California."

A Japanese palaeontologist, Dr Naoki Kohno, has previously proposed that the earliest fur seals lived in the open ocean and only rarely strayed into continental shelf areas where they would be more likely to be preserved as fossils. This hypothesis is supported by this fossil having been collected from rock formed by sediments deposited in what was then continental shelf, rather than extensively studied inland fossil sites, such as Sharktooth Hill, that formed in bays.

Published in Biology Letters. Morgan Churchill, a PhD student at the University of Wyoming, co-authored the research paper and ran the phylogenetic analysis that clarifies the evolutionary relationships of Eotaria with other seals.
News Articles
More Articles All Articles
About