There are heart transplants, and artificial hearts, but the future clearly rests in a place where major organs are regenerated from a patient's own cells, with no immunosuppressive drugs or donor waiting lists. Until then, research continues into getting better self-repair. While blood, hair and skin cells can renew themselves throughout life, our heart cells cease to divide shortly after birth, and there is very little renewal in adulthood - but new research at the Weizmann Institute of Science examines the possibility of turning back that clock. 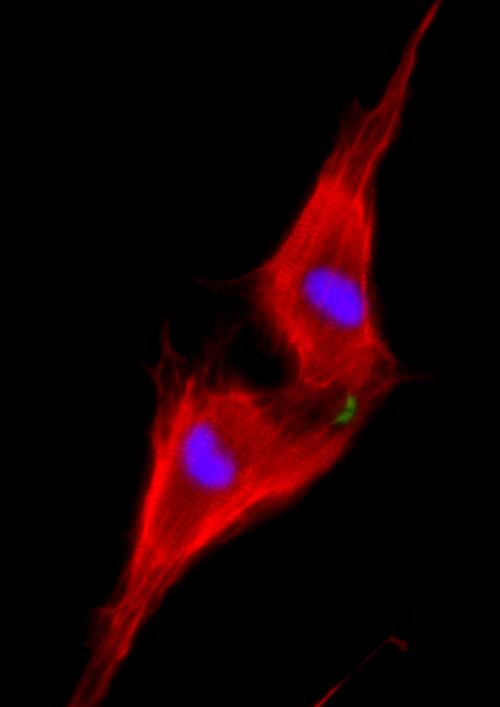 Prof. Eldad Tzahor of the Institute's Biological Regulation Department thought that part of the answer to the regeneration puzzle might lie in his area of expertise: embryonic development, especially of the heart. Indeed, it was known that a protein called ERBB2 - which is well studied because it can pass along growth signals promoting certain kinds of cancer - plays a role in heart development. ERBB2 is a specialized receptor - a protein that transmits external messages into the cell. ERBB2 generally works together with a second, related, receptor by binding a growth factor called Neuregulin 1 (NRG1) to transmit its message. NGR1 is already being tested in clinical studies for treating heart failure.

Dr. Gabriele D'Uva, a postdoctoral fellow in the research group of Prof. Eldad Tzahor, wanted to know exactly how NRG1 and ERBB2 are involved in heart regeneration. In mice, new heart muscle cells can be added up to a week after birth; newborn mice can regenerate damaged hearts, while seven-day-old mice already cannot. D'Uva and research student Alla Aharonov observed that heart muscle cells called cardiomyocytes that were treated with NRG1 continued to proliferate on the day of birth; but the effect dropped dramatically within a week, even with ample amounts of NRG1. Further investigation showed that the difference between a day and a week was in the amount of ERBB2 on the cardiomyocyte membranes.

The team then created mice in which the gene for ERBB2 was knocked out only in cardiomyocytes. This had a severe impact: The mice had hearts with walls that were thin and balloon-like - a cardiac pathology known as dilated cardiomyopathy. The conclusion was that cardiomyocytes lacking ERBB2 do not divide, even in the presence of NRG1. Next, the team reactivated the ERBB2 protein in adult mouse heart cells, in which cardiomyocytes normally no longer divide. This resulted in extreme cardiomyocyte proliferation and hypertrophy - excessive growth of the individual cardiomyocytes - leading to a giant heart (cardiomegaly) that left little room for blood to enter. Tzahor: "Too little or too much of this protein had a devastating impact on heart function."

The question then became: If one could activate ERBB2 for just a short period in an adult heart following a heart attack, might it be possible to get the positive results, i.e., cardiac cell renewal, without such negative ones as hypertrophy and scarring? Testing this idea, the team found that they could, indeed, activate ERBB2 in mice for a short interval only following an induced heart attack and obtain nearly complete heart regeneration within several weeks. "The results were amazing," says Tzahor. "As opposed to extensive scarring in the control hearts, the ERBB2-expressing hearts had completely returned to their previous state."

As detailed in their Nature Cell Biology article, investigation of the regenerative process through live imaging and molecular studies revealed how this happens: The cardiomyocytes "dedifferentiate" - that is, they revert to an earlier form, something between an embryonic and an adult cell, which can then divide and differentiate into new heart cells. In other words, the ERBB2 took the cells back a step to an earlier, embryonic form; and then stopping its activity promoted the regeneration process.

In continuing research, Tzahor and his team began to outline the pathway - the other proteins that respond to the NRG1 message inside the cell. "ERBB2 is clearly at the top of the chain. We have shown that it can induce cardiac regeneration on its own. But understanding the roles of the other proteins in the chain may present us with new drug targets for treating heart disease," says D'Uva.

Tzahor points out that clinical trials of patients receiving the NRG1 treatment might not be overly successful if ERBB2 levels are not boosted as well. He and his team plan to continue researching this signaling pathway to suggest ways of improving the process, which may, in the future, point to ways of renewing heart cells. Because this pathway is also involved in cancer, well-grounded studies will be needed to understand exactly how to direct the cardiomyocyte renewal signal at the right place, the right time and in the right amount. "Much more research will be required to see if this principle could be applied to the human heart, but our findings are proof that it may be possible," he says.
News Articles
More Articles All Articles
About